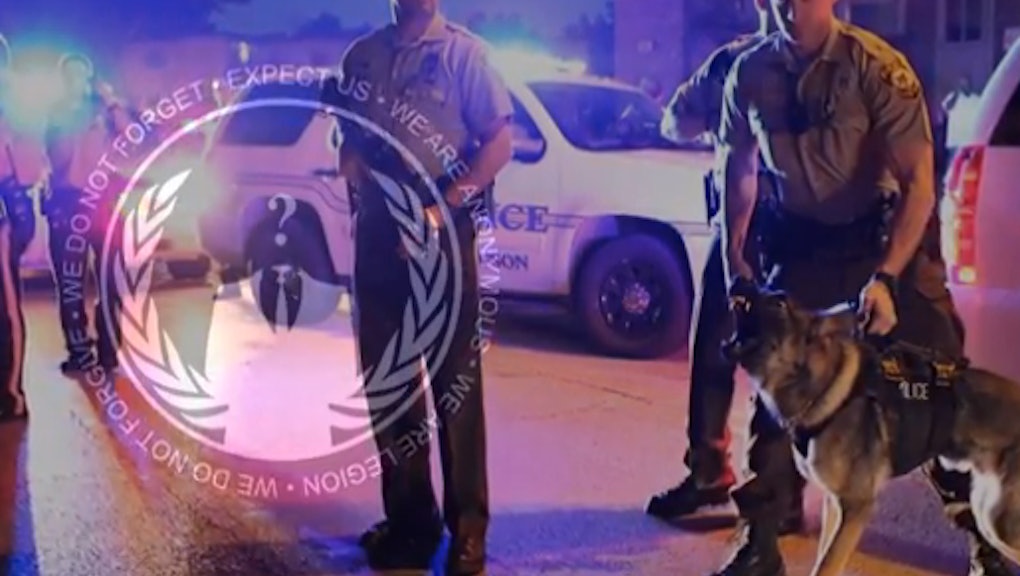 The news: Internet "hacktivist" collective Anonymous has released a statement on the Michael Brown shooting.

In the two-minute video posted to YouTube Sunday night, a digitally altered voice delivers a strict list of demands for local police and legislators:

"Anonymous will not be satisfied this time ... with simply obtaining justice for this young man and his family," the voice says. "Anonymous demands that the Congressional Representatives and Senators from Missouri introduce legislation entitled 'Mike Brown's Law,' that will set strict national standards for police conduct and misbehavior in the USA."

More: The voice adds a motion of support for citizens of Ferguson, Mo., who've taken to the streets in the past two days to express their dissent over Saturday's shooting. "To the good people of Ferguson, take heart and take your streets," it says. "You are not alone."

It also contains a warning to local police: "We are watching you very closely ... If you abuse, harass or harm in any way the protesters in Ferguson we will take every web-based asset of your departments and governments offline. That is not a threat. It is a promise."

And finally: An outline of more individualized retribution tactics: "Attacking the protesters will result in the release of personal information on every single member of the Ferguson police department," the voice states. "[We] will seize all your databases and email spools and dump them on the Internet.

"This is your first and last warning."

And it turns out Anonymous was completely serious:

"The time has come to draw a line in the sand": When a local police officer shot and killed unarmed 18-year-old Michael Brown in Ferguson, Mo. on Saturday afternoon, the city's residents responded in force.

Vigils, protests and civil unrest were met by armored officers from at least 15 local jurisdictions, and a swift Twitter response drew national attention to the incident.

U.S. Attorney General Eric Holder and the NAACP have both called on outside monitors to ensure internal investigations into the Ferguson incident remain corruption-free.

Anonymous has a track record for holding authority figures accountable, as evidenced by their famous oversight of the Steubenville rape case in April 2013. Gawker reports they've also launched a website and hashtag and published a written statement to amplify action around the Mike Brown shooting.