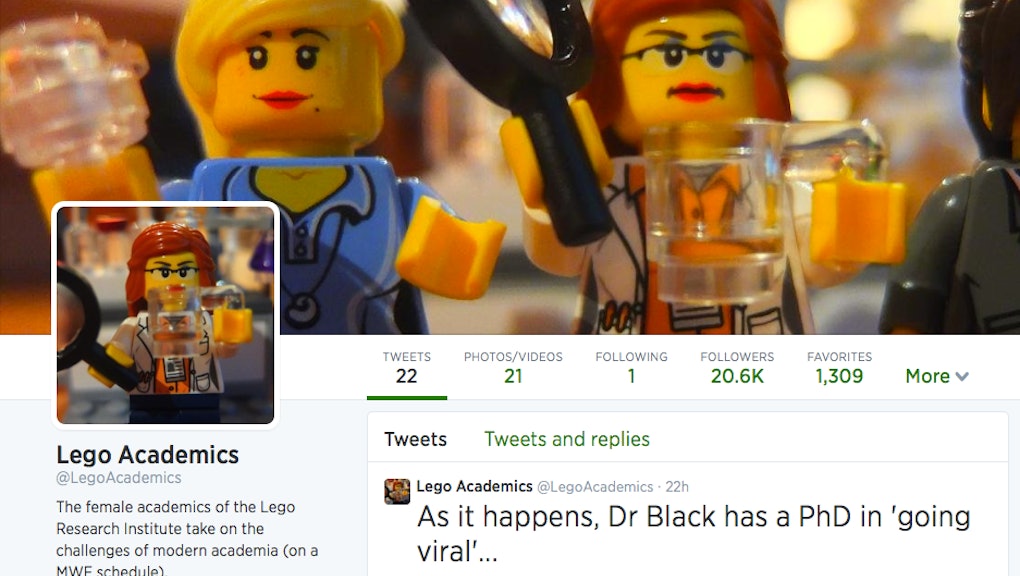 The news: The brand-new "Research Institute" Lego set featuring three female scientists now has its own Twitter account, and it's unquestionably amazing.

The account is the work of Donna Yates, an archaeologist who works at the University of Glasgow. She told the Washington Post that she bought the new Lego set during a bout of "nerdish glee," and that the photos are inspired by her own experiences as an academic.

There is clearly an audience for these characters. As Yates told the Post, this latest Lego set has "made some amends" in the area of marketing toward women and girls.

Besides the Twitter account, sales of the Research Institute set have skyrocketed, and it's currently sold out on Lego's website. Hopefully, Lego executives will see the positive response and continue to feature these kinds of products.

Because when it comes down to it, we need them. The effort to create the Research Institute Lego set didn't come entirely from the company — it also came in part from a 7-year-old girl who wanted to see the girls doing the same things the boys did.

Science, technology, engineering and math (STEM) jobs are dominated by men. As long as these fields continue to employ women in lower numbers — they made up just 26% of the STEM workforce in 2011 — we need to accessible examples of women in these areas.

As @LegoAcademics shows, even adults can appreciate the lady Legos. The earlier we can show children that women can succeed in STEM fields, the better. But Yates' project proves that it's never too late to get interested.

Though we're definitely not done when it comes to improving diversity in Legos — an elementary school class recently pointed out its lack of non-white characters — we're slowly getting there.