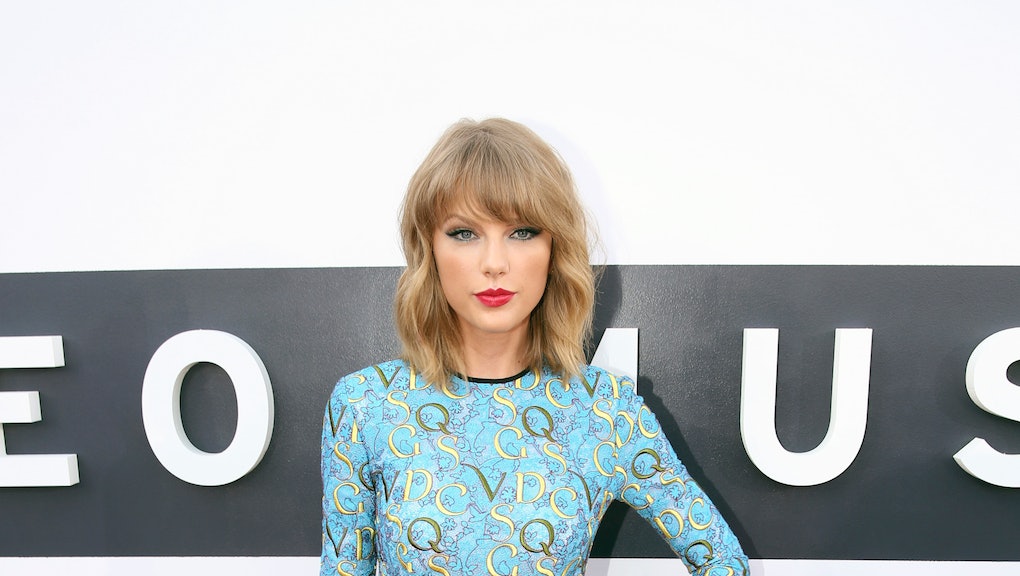 Thanks to Lena Dunham, Taylor Swift Has an Epiphany: Feminism Is Pretty Great

Taylor Swift has come out... as a feminist.

"As a teenager, I didn't understand that saying you're a feminist is just saying that you hope women and men will have equal rights and equal opportunities," Swift explained in her recent interview with the Guardian. She continued:

What it seemed to me, the way it was phrased in culture, society, was that you hate men. And now, I think a lot of girls have had a feminist awakening because they understand what the word means. For so long it's been made to seem like something where you'd picket against the opposite sex, whereas it's not about that at all.

This is a common position of many women who, out of fear of being distanced and pigeonholed by men, refuse the feminist label. It is hypocrisy, but not completely surprising, since women, especially those in the music industry like Swift, are reliant upon those men who control the fate of their careers, because men run the industry.

For years the country-pop superstar was known less as an idol than an ingenue for her politics; fans have been baffled by her apparent refusal to claim a feminist label, especially given her girl-empowering persona and lyrics that could certainly be intepreted as encouraging girls to stand up for themselves.

Swift's own statements about feminism compounded the confusion, as they appeared to misconstrue its basic definition as something more akin to misandry, man-hating, than the pursuit of legal equality for all sexes and genders. As she told the Daily Beast's Ramin Setoodeh in 2012, "I don't really think about things as guys versus girls. I never have. I was raised by parents who brought me up to think if you work as hard as guys, you can go far in life."

This understanding, or rather misunderstanding, is symptomatic of a larger problem: the fact that feminists lost control of their narrative following the failure of all 50 states to ratify the Equal Rights Ammendment, circa 1982. Since then, conservatives, misogynists and other anti-feminist women have all worked to take control of the feminist narrative, in which they projected an image of feminism as an aggressive attempt by women to disparage and emasculate men. In recent years, this anti-feminist messaging seems to have taken hold, with high-profile entertainers such as Kelly Clarkson, Swift and Shailene Woodley coolly rejecting the label.

Luckily, it seems that feminists may be taking back the power.

This is thanks to a new crop of feminist public intellectuals and media personalities who have worked hard to clarify what it means to be feminist to all those women, like Swift, who simply may never have been educated properly.

Worth noting is who specifically Swift singles out as someone who helped her understand the true meaning of feminism: creator of HBO hit Girls Lena Dunham. "Becoming friends with Lena — without her preaching to me, but just seeing why she believes what she believes, why she says what she says, why she stands for what she stands for — has made me realize that I've been taking a feminist stance without actually saying so," Swift told the Guardian.

Dunham, an award-winning writer, director and actor in her own right, took to Twitter to hail Swift's clarified position on feminism, but she deserves a good deal of credit for presenting American culture with a new face of feminism.

Instead of lamenting systemic patriarchy and its psychological ramifications on women's behavior, let's celebrate Dunham and all the other women like her for their roles in this latest feminist surge.

In January of 2013, Dunham told Metro that one of her biggets "pet peeves" was women who refused to call themselves feminist. "Do you believe that women should be paid the same for doing the same jobs? Do you believe that women should be allowed to leave the house? Do you think that women and men both deserve equal rights? Great, then you're a feminist," she said. "People think there is something taboo about speaking up for feminism. I know for a long time that I was embarrassed to call out misogyny because I was then going to be that complaining girl who can't let it go. But the fact is, we can't let it go — not until we feel like we have been heard."

Could this public change of heart from one of the world's biggest female artists be a sign of things to come? Clearly, Swift was listening — who's next?