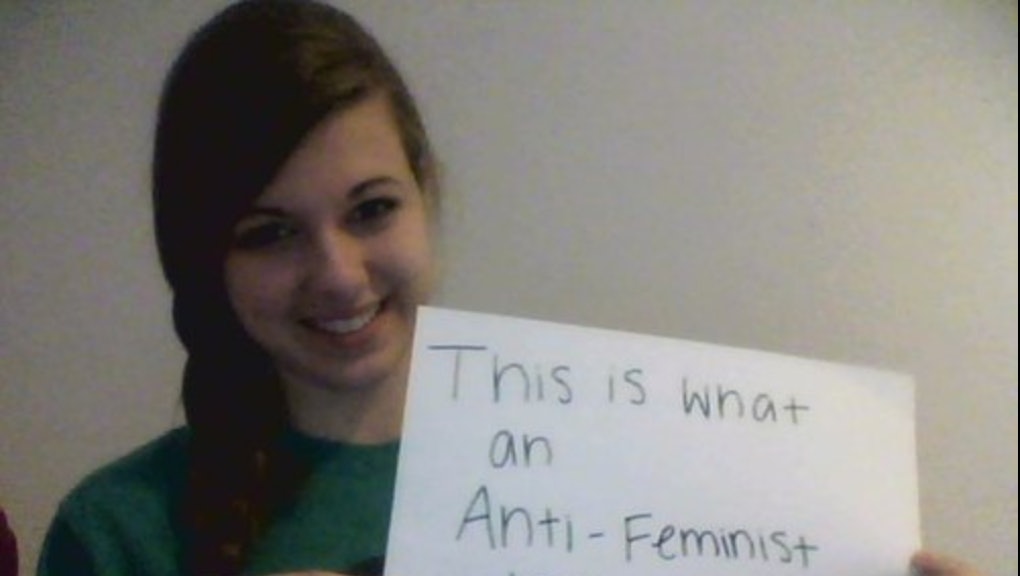 8 Photos That Prove These 'Women Against Feminism' Still Need Feminism

But that's not the case for the "Women Against Feminism," a community of women emerging on Tumblr and Facebook, uniting to celebrate their distaste for mainstream feminist movements. Through photos and signs, these women make their message crystal-clear: They don't ever want to be called a feminist.

While it's important to respect opinions on all sides of controversial issues, many of the reasons these women give betray an unfortunate and potentially damaging ignorance of what feminism actually means.

On display is rhetoric steeped in rape culture, gender-blindness and even age-old stereotypes of feminists as angry, hairy-legged, bra-burning, man-hating lesbians who believe that men are the root of everything bad — or, as we've come to call it, patriarchy. This denialism and cluelessness might call to mind so-called men's rights activists (MRAs) who decry feminists for not honoring their struggles. Never mind that many elements of the broader gender equality movement historically have and continue to do so.

The growing popularity of the photo series proves why, more than ever, we need to communicate a deeper and more nuanced understanding of what it really means to be a feminist — and one alert to intersectionality at that. To borrow from the oft-quoted definition by Nigerian writer Chimamanda Ngozi Adichie, a feminist is a person who believes in the social, political and economic equality of the sexes (and genders).

With that definition as a lens through which to view these photos, it appears that these women are either unaware, brainwashed by MRAs or blissfully ignorant about how feminism has affected their everyday lives. Ultimately, putting feminism into practice takes a conscientious attitude about empathizing across lines of difference for people of all sexes, gender identities and gender expressions. And as a queer, gender-fluid male of color, I want to take a moment to acknowledge my own male privilege in this conversation and affirm that the broader movement for gender equality allows us to discuss pathways for liberation across gender identities and expressions.

Below are some examples highlighting the multiple flaws in these arguments, in the hopes that the ongoing conversation about feminism can eradicate these messages for good.

First things first: In the words of bell hooks, feminism is for everybody.

Because of how patriarchy and male privilege work in contemporary Western society, men are overrepresented and have the ultimate say in almost every element of social and institutional life. That includes lopsided representation in Congress, unequal pay for equal work, barriers to reproductive and sexual health education and resources, and a prevailing culture entrenched along a spectrum of sexual violence. Women contend with these issues on a daily basis because of a society whose principles were established without including the voices of women from all backgrounds.

Many women do the work of addressing men's issues, such as a disproportionately high suicide rate, a lower college graduation rate and having their lives swallowed up by the prison-industrial complex. Others choose to focus on issues mostly intrinsic to women because they've been ignored for so long by the people in power, the vast majority of whom have been men. So it's not unreasonable for women to focus on the issues most directly affecting their lives before directly addressing men's.

But that doesn't mean that feminism doesn't understand or care about men's struggles. In advocating for gender equality and women's liberation, men and people of all sexes and genders work toward a more inclusive reality.

No matter what someone wears, how much they've had to drink or how much another person "knows they want it," rape is absolutely not okay.

Putting the responsibility for rape on the survivors of sexual assault shifts the conversation from where it should be: the oppressive mindsets of those who deny someone else's bodily autonomy and sexual freedom, taking it at their will with impunity.

Feminism has long been working to reshape the conversation on the social, cultural and even political reasons why rapes are still so commonplace. Doing so makes it easier to get at the heart of the matter, rather than spending precious time and resources focusing on the symptoms.

Anyone who shifts the blame back on rape survivors is ultimately part of the problem.

Everyone wants to feel beautiful, affirmed and appreciated, right?

But catcalling, playing pick-up artist tricks and objectification are a far cry from a simple compliment on your outfit or your charming presence. And telling a woman to smile challenges her right to choose how she behaves. Feminists combat a culture of dehumanizing power plays that assert male dominance and ownership over women's bodies. It all begins with the "male gaze," which makes women into commodities to be brought and sold rather than human beings with emotions and personal autonomy.

The male gaze often translates into the ugliest of power dynamics, such as rape, sexual harassment in the workplace and decisions about reproductive health care. The male gaze tends to be the default, rather than how women truly wish to be seen or understood. Feminism fights for a more honest, comprehensive approach to women's visibility, not just the narrow-minded objectification often perpetuated by men.

Speaking up about oppressive social and institutional structures doesn't consign an individual, or even a feminist, to a permanent "victim mentality." It means they're using their words and actions to point out that it's harder to navigate the world within a certain sex or gender.

Feminists aren't victims — far from it. Feminists have been working tirelessly to thrive for decades, despite a society that's been hellbent on holding women back, often to the detriment of men and people of all gender identities.

Feminism isn't about making every woman enter the workforce to become a Fortune 500 CEO, or telling them they can't be stay-at-home moms who do the work of raising and loving their families. Feminism says that women should have the right to choose.

It's a right of self-determination that men often take for granted, while simultaneously denying women that same freedom in an abuse of their social and institutional power and privilege. That's largely why men have long been overrepresented in most business and political forums, while women are steadily becoming more integrated only after decades with few options for their life and career trajectory.

6. Feminism is about unfairly granting women "special rights" and handouts.

That only scratches the surface of the rights that feminists have fought for, rights which some people, male and female, now take for granted because they are either unfamiliar or simply don't care for the historical work done to elevate their position in society. These are rights and opportunities women should have always had, but because patriarchy was the rule and not the exception, such freedoms and possibilities were restricted.

Feminism is about opening up those long-locked doors and shattering the many glass ceilings that men ultimately created for women.

Far from it. Advocating for women's rights and gender equality doesn't mean women want to "win" a social and political war by somehow enshrining matriarchy and misandry to replace patriarchy and misogyny.

Gender equality isn't a zero-sum game: One group doesn't achieve empowerment and strength at the expense of the others. Instead, just like other social movements along the lines of power and privilege, feminism seeks to level the playing field.

8. I don't want a "feminist" label to define me. We're a post-patriarchy society.

"Feminist" is only a dirty label to the people who don't understand the history of the movement, and who instead play on the nasty stereotypes and tropes that derail conversations about gender equality at the wholesale dismissal of feminist advocates.

However, womanism is one additional, related label and ideology tied to feminism. It emerged in response to how "feminist" became dominated by the experiences of elite, educated and wealthy white women, who have historically taken up too much space in the conversation, at the expense of women of color and black women in particular. It's an issue even today, with the hashtag #SolidarityIsForWhiteWomen and similar social media movements challenging feminists and gender equality advocates to more fervently practice intersectionality.

At its true root, feminism addresses the social and institutional disparities for people of all sexes and genders, which exist in many forms. For proof, look no further than the recent Supreme Court decision about reproductive health in the Hobby Lobby case. We're nowhere close to being post-patriarchy.