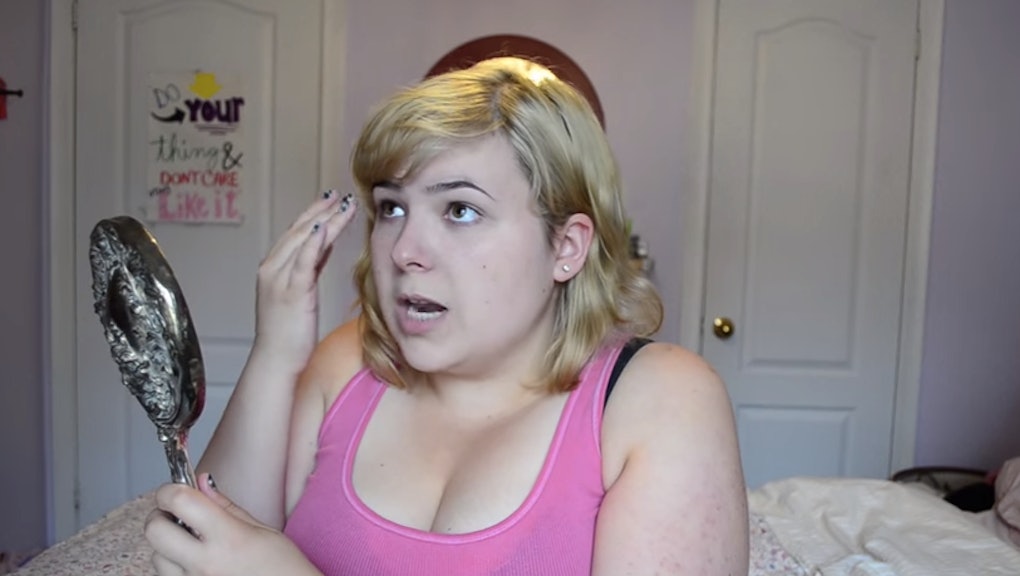 "The first step, as always, is foundation," comedian Megan MacKay explains in her new "makeup tutorial" inspired by the recent Ray Rice controversy. "I'm using a new shade that I just bought called 'The NFL.' I really like this color because it will cover up anything just to save face."

The tongue-in-cheek tutorial is actually a pretty clever feminist critique of the culture of rape perpetuated by society and, in particular, by the National Football League, currently under fire for its handling of former Baltimore Ravens star Ray Rice's caught-on-camera domestic abuse. The video also sheds light on how women, by force or otherwise, can find themselves stuck within the culture of violence that surrounds them.

After foundation, MacKay reaches for some eyeliner, called "Women Are Objects," and tells women to line their lines in the shape of a wedding ring. The method, she explains, has a clear logic: "When you put on a wedding ring, the guy can do anything he wants to you —and it's automatically your fault. Say he knocked you out cold in an elevator and then everyone found out about it. And people started blaming you, because you put on the wedding ring, so you were kind of asking for it, you know?"

After the final flourish, dressing her lips with "We Can Do Better" lipstick, MacKay breaks character to note the pervasiveness of domestic violence in America. As Mic's Chris Walker states in a recent piece about the Ray Rice scandal,  "[t]he facts of domestic violence are tragic. 'One in 4 women have been the victim of severe physical violence by an intimate partner in their lifetime,' according to a report by the Centers for Disease Control and Prevention. And a startling 24 people per minute in the U.S. suffer rape, physical violence or stalking by an intimate partner."

MacKay concludes, "There's always an alternative to covering up violence. You don't have to be like the NFL."

The Canadian comedian, who has previously created videos such as "How to Hunt for a Husband" and "Hobby Lobby Makeup Tutorial," told MTV that her videos are inspired by makeup tutorials, which she watches fanatically. Makeup parodies just seemed like a "logical place to go," she said, especially because of the way they have clear steps that build toward a finale — or in her case, a punchline.

"Generally when I'm making a video, I start with picking a news story that I'm really passionate about," she said. "I'm a big-time feminist and the NFL just botched the hell out of the Rice scandal, so the choice for me was pretty clear. I really wanted to pull apart and examine the way we were talking about the Rice incident and compare it to how we speak about and treat abuse victims in general."

The Ray Rice story has brought no shortage of commentary on the topic, some smart, some not so much. But MacKay's approach has clearly struck a nerve. The video has been viewed hundreds of thousands of times so far on YouTube. "I'm so glad it resonated with people, and I'm happy I could contribute a little bit to what I believe is a very important conversation," she said.