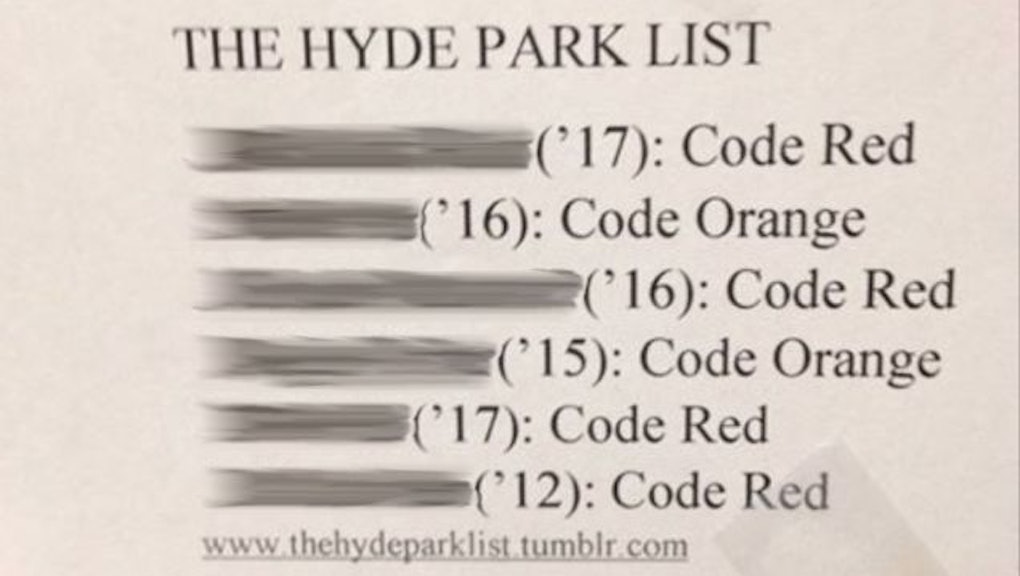 Claiming the University of Chicago doesn't do enough to keep its students safe, an anonymous group called Concerned Citizens took matters into its own hands by assembling a list of alleged rapists, which has since gone viral.

Originally posted to a Tumblr called The Hyde Park List, the list identified "people known to commit varying levels of gender-based violence" at the university. That first Tumblr iteration was quickly taken down, but it has since reemerged in a more abridged version. Copies of the list also began appearing in campus bathrooms this past weekend during the start of freshman Orientation Week.

According to Jezebel, the list named "six current and former UChicago students; all appear to be men and do/did go to the college." The list was color-coded, with each name assigned either "Code Orange" or "Code Red," presumably indicating that person's perceived threat level. One name includes the addendum "Note: Often at fraternity parties."

The University of Chicago is among dozens of higher education institutions under investigation for its mishandling of campus sexual assault cases. As part of the federal investigation, the university reportedly rewrote its policy on sexual misconduct this July.

Apparently, these efforts fall short of translating into action on the ground for students.

"A lot of people see the list as endangering the reputations of the men, but I see it as a last resort," Olivia Ortiz, an undergraduate linguistics major at the university and sexual assault survivor, told DNAInfo.

Ortiz is not alone in her frustraion. In February, a long list of alumni signed an open letter to school president Robert J. Zimmer, published in student newspaper the Chicago Maroon.

"Former students are watching and waiting for the University of Chicago to do the right thing," the alumni wrote. "To that end, we are heartened that the [U.S. Department of Education's Office for Civil Rights] has taken steps to hold the university accountable. President Barack Obama has recently made it clear that ending sexual assault on campus needs to be a priority in higher education. The University of Chicago has the opportunity to be a leader on this issue. It is past time for the university to implement the current standard best practices for sexual violence prevention and response on campus."

This also isn't the first time students have circulated such a list. This past May, students at Columbia University circulated a similar rapist list in campus bathrooms. Columbia, like the University of Chicago, has been plagued by allegations of mismanagament when it comes to sexual assualts on campus. In part prompted by her experiences as a rape survivor, Columbia student Emma Sulkowicz recently vowed to carry her mattress around campus until her alleged rapist is brought to justice.

The country's college sexual assault epidemic has recently boiled to the surface, with numerous Title IX complaints prompting a federal investigation of 55 colleges and universities, as well as the formation of the White House Task Force to Protect Students from Sexual Assault. Just this week, President Obama and Vice President Biden launched "It's On Us," a sexual assault prevention campaign targeting colleges and placing an emphasis on men's responsibility to prevent rape.

With 1 in 5 female college students experiencing sexual assault, it's time for colleges to step up efforts to protect students. Until then, it looks like students may feel forced to continue to rely on each other for support and action.