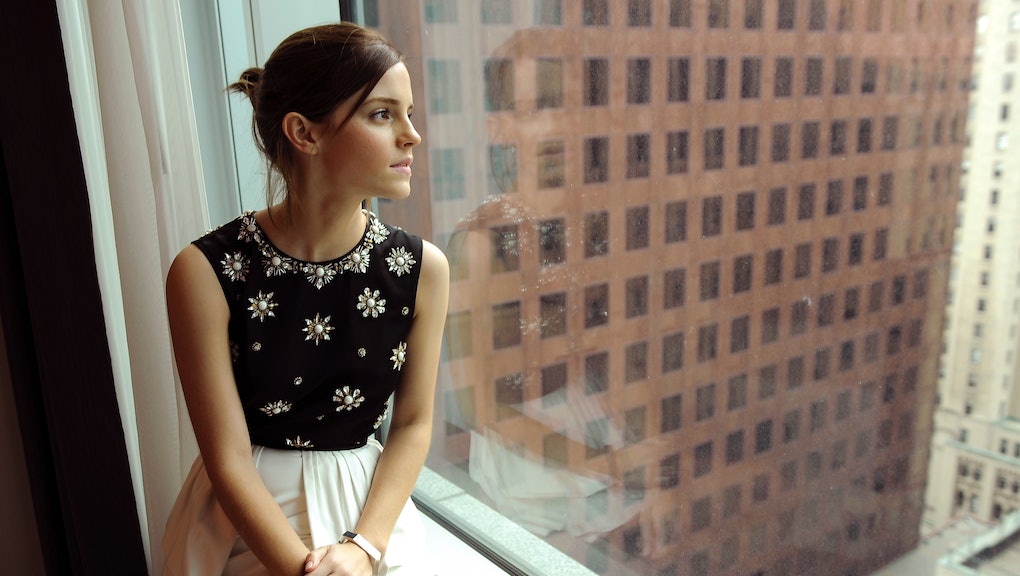 The Problem With Nude Photos Isn't Women, But the Men Who Obsess Over Them

Emma Watson's feminist speech at the United Nations in September 2014 has garnered a lot of attention — and for good reason. The young actress spoke eloquently about the importance of feminism and the stigma that still surrounds the word. She also called on men to take responsibility for decades of deeply entrenched inequality.

"How can we effect change in the world when only half of it is invited or feel welcome to participate in the conversation?" Watson asked a room full of delegates and leaders. "It is time that we all see gender as a spectrum instead of two sets of opposing ideals."

The urgency and relevance of her feminist message became that much more pronounced after it was rumored that the anonymous forum 4CHAN might be planning to release naked photos of the star. Given that they came on the heels of the largest female celebrity hack of all time, the allegations were taken seriously. Although the incident turned out to be a very ill-conceived marketing prank, the incident still begs the question: Have nude pictures become the new weapon of online misogynists?

So how are we supposed to defend ourselves against this imminent threat? Never snap or share intimate photos, not even with someone you love and trust? Or maybe we should tell women to never trust anyone under any circumstances.

Besides being impractical and insulting, these short-term fixes primarily serve to place the responsibility back on women, the victims. The idea that not snapping intimate photos is the only way to prevent them from being released publicly is the same rationale behind misguided anti-rape campaigns that tell women to cover up when they go outside or never walk home unescorted.

But these types of victim-blaming narratives aside, the problem in this case isn't nude photos per se, it's the way we use women's bodies to humiliate and undermine them as people.

Given how intimately embedded technology is in our daily lives, there will always be nude photos, or some permutation of them. Who knows what devices will be able to record and capture in the future? Developments in portable technologies like Google Glass, for instance, theoretically could make women especially vulnerable because they empower abusers to snap photos without a woman's knowledge. The threat is real, and it's not something women can control.

That's why ultimately getting lost in discussions about what women should and shouldn't do is counterproductive — it doesn't address the root of the problem. A woman can never be "safe" or "responsible" enough in a society that systematically tries to expose or violate her body. When one woman is told her body is for public consumption and that it does not belong to her, it sends us all the same message. As Amanda Taub at Vox pointed out, an assault on Watson is an attack on us all.

Just like other crimes against women, nude photo scandals are not about sex, they are about power. If they were about sex, men would be threatened with them more frequently. Is it because men's phones and computers don't get hacked? Of course not.

It's because dangling a picture of a naked man's body over his head would not have the same commanding effect. The driving ideology is that while he has nothing to be ashamed for, a woman does. We also don't inherently devalue men's bodies the same way we do women's. We still view a woman's body or sexuality as something that she needs to control or hide. Our society gives power to nude photos of women because we inherently view women's bodies as degrading.

Stealing and exposing photos of someone's naked body is a form of sexual assault. And it won't stop with women being paranoid about cameras. Just like we won't stop sexual assault by telling women not to go outside, we won't stop nude photos from being leaked by making women fear the existence of their own bodies.

Nude photos won't go away. But we may be able to limit their power over use once women stop believing that their bodies can be used to punish them. Behind every successful women, there's a naked body, and that shouldn't be something that women should have to fear.