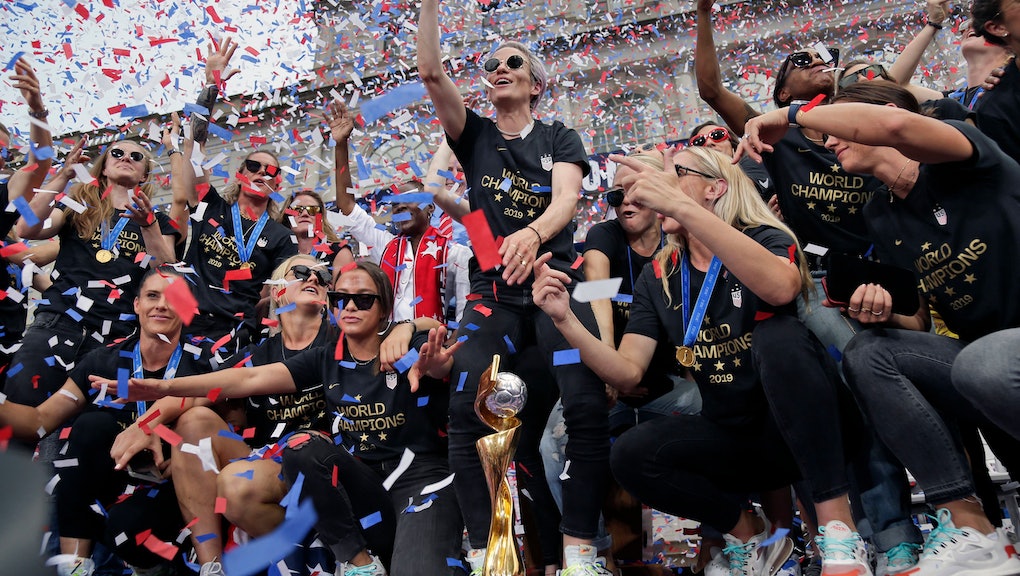 On Sunday, July 7, the United States Women's National Team won their fourth World Cup championship, making history and becoming American heroes. To welcome them back, New York City threw the USWNT a ticker tape parade on Wednesday, July 10, an event that was filled with moments of true excellence.

From champagne cheers to the mayor awkwardly dancing to powerful speeches to the team using their lawsuit against the United States Soccer Federation as confetti, the parade was a jubilant celebration. The women deserved it; not only are they international champions, but they scored the most goals in World Cup history, their captain Rapinoe was awarded the Golden Boot and the Golden Ball in the tournament, and they elevated women's soccer to a new tier of global recognition.

Still, while there were many moments of cheer during the parade, the team made sure to also take the opportunity to advocate for the issues they care about. If you weren't lucky enough to attend the event in person, or you simply want to relive it all now, we've rounded up the most memorable moments of Wednesday morning's parade.

1. Megan Rapinoe saying "I deserve this" while clutching champagne and the World Cup trophy

Megan Rapinoe, you absolutely do deserve that trophy, and you also deserve everything, as you clearly point out.

Before 2015, when the USWNT last won the World Cup, it had been 50 years since New York City honored women with a ticker tape parade. Just four years later, it happened again, and it looked quite magical.

Kelley O'Hara, who made headlines for kissing her girlfriend after the team's win against the Netherlands on Sunday, showed true enthusiasm during the parade. Holding two large cans of Coors Light, the athlete looked like a true champion.

Some people wondered if Alex Morgan's tea-sipping goal celebration in the match against England was disrespectful, but the athlete clearly didn't care. During the parade down the Canyon of Heroes, she re-enacted the moment — with the World Cup trophy.

5. And then dousing the crowd in champagne

As a look at any of the USWNT players' social media will show you, the ladies have been enjoying their victory with a hefty amount of champagne — fitting, since it is the drink of champions. Morgan made sure to share some of that bubbly love with the crowds of adoring fans who gathered at the parade on Wednesday.

When fans began to chant "equal pay!" at the float carrying Tobin Heath and Crystal Dunn, the team gleefully joined in. After all, they are still in the middle of a gender discrimination lawsuit against the USSF.

The ladies kept the chant going throughout the parade, eventually joined by New York Governor Andrew Cuomo, who signed a gender pay equity bill into law at the end of the event.

The USWNT are inspiration for the next generation of soccer players and change makers, and the kids who showed up to the parade were ecstatic about seeing the players they followed on TV in real life. One boy even told CBS News that seeing the floats with all of the athletes was like "meeting my favorite person in the world."

8. The lawsuit being used as confetti

In behind-the-scenes footage shared by player Ashlyn Harris, the team was shown arriving at City Hall and turning their gender discrimination lawsuit against the USSF into more ticker tape for the parade. Harris captured the pages of the suit lining the trees of City Hall, posting a video of herself crumpling up one of the documents and saying "pay us, bitch" while Allie Long ate a different page of the lawsuit.

When Rapinoe — team captain, top scorer, political activist — walked up to the podium to give her victory speech on the steps of City Hall, she entered with the energy of someone who knows they're a champion. Watch the incredibly blissful 42-second clip of the athlete dancing.

10. And then delivering a powerful speech

When Rapinoe took the stage, she applauded the diversity and excellency of her team. "We have pink hair and purple hair. We have tattoos and dreadlocks," she said. "We got white girls and black girls and everything in between, straight girls and gay girls."

Then, she launched into an inspiring call to action. She described the weight of the fight that the women's team has taken on in the past few months, not only to win a championship but to be role models, and to demand equal pay. She asked the people in the audience, the people at home, the people who support the team, and the people who don't, to take on the responsibility to improve.

Her remarks echoed the message she sent to President Donald Trump just one night earlier, in which she called on him to do by better by Americans.

"We have to be better. We have to love more, hate less. We've got to listen more and talk less," Rapinoe said in her City Hall speech. "We've got to know that this is everybody's responsibility... it's our responsibility to make this world a better place."