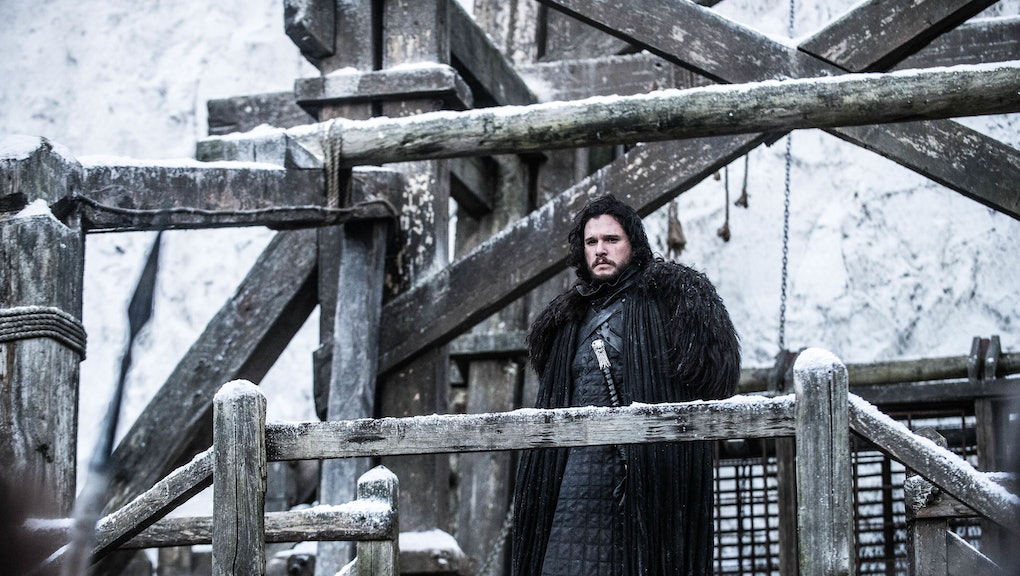 Major spoilers ahead. Well, it's finally over. In the very last Game of Thrones episode, titled “The Iron Throne,” the show killed off Daenerys Targaryen, crowned Bran Stark the King of the Six Kingdoms, made Sansa Stark the Queen in the North, and banished Jon Snow back to the Wall, which he promptly ditched to go live out the remainder of his days as a wildling. There was enough drama and chaos to give any viewer emotional whiplash, so it's understandable if you missed a few significant details in the Game of Thrones series finale while watching the episode.

Fortunately, if that was the case, we’ve got you covered. Here's a breakdown of 12 meaningful moments you might've overlooked during Thrones' final installment:

1. When Tyrion found Jaime and Cersei’s bodies, “The Rains of Castamere” played unaccompanied

The Game of Thrones score has always been rich with character themes, but none has been more notably utilized than the House Lannister tune, “The Rains of Castamere." In the show’s lore, the song was first written to commemorate the obliteration of a rival House by Tywin Lannister, and it's been used several times throughout Thrones to underscore significant Lannister moments, including the Red Wedding. Its final appearance happens in the finale, when Tyrion uncovers the bodies of his siblings under the rubble of the Red Keep. This time, a single stringed instrument plays the track unaccompanied, poignantly underscoring the fact that Tyrion is now all alone as the last surviving Lannister.

2. The shot of Drogon behind Daenerys was a callback to her conversation with Olenna Tyrell in Season 7

The finale had no shortage of beautiful visuals, including the shot of Drogon’s wings unfurling behind Daenerys as she goes to address her Unsullied and Dothraki troops. The shot makes it look for a moment as though it’s Dany herself who has sprouted dragon wings, and the symbolism is obvious: in burning King’s Landing, Daenerys has finally become the dragon she has always claimed to be.

Yet the scene is also a more subtle callback to a conversation Dany had with Olenna Tyrell in Season 7 about this exact series of events unfolding. In that exchange, Dany was fresh off of arguing why she refused to burn King’s Landing in order to gain the Iron Throne (my, how things changed), and Olenna told her that if she truly wanted a lasting rein, she’d have to stop pursuing peaceful paths to sovereignty and would instead need to “be a dragon.” This shot of Drogon seeming to merge with Dany serves as visual confirmation that she finally achieved precisely that.

After Daenerys shouts to her troops that she's not done “liberating” other lands in Westeros, Tyrion tells Jon that he should’ve realized from the speech that she's still trying to fight. But the thing is, Jon didn’t have any idea what Dany was saying. The queen delivered her speech in High Valyrian, a language Jon does not speak, and so all he heard was probably, “something something Winterfell something something,” followed by a lot of spear-thumping.

So while he might have been a little suspicious that her tone sounded like she was rallying the troops, there was no way for him to have known for sure what she was telling them. This could explain why he spends so much time later arguing with Tyrion that the war is over now, when we all know it’s not.

4. Daenerys’ vision from the House of the Undying came true

As predicted, “The Iron Throne” saw Daenerys walking through the demolished Great Hall of the Red Keep as something that looks like snow — but is actually ash — falls gently around her. This is a direct callback to her vision in the House of the Undying back in Season 2, in which she reached for the Iron Throne, but never managed to touch it. While she does technically manage to lay her hand on the hilt of one of its 1,000 swords this time, she never gets a chance to sit in its pointy seat, as Jon kills her before she can claim the throne.

Daenerys’ early vision even correctly predicted how her life would end; in the vision, when she is pulled away from the throne to be reunited with her deceased husband and child, she muses, “Maybe I am dead and I just don’t know it yet.”

5. Robyn Arryn was in the King's Landing council scene

Many fans were surprised when, during the meeting in King's Landing to choose a new ruler, Edmure Tully — Catelyn Stark's brother — not only showed up, but tried (and failed) to be considered for king. Yet he wasn't the only Game of Thrones character who hadn't been seen in years to re-appear in the scene. There was also Robyn Arryn, Lord of the Eyrie, the once-creepy child last seen briefly in Season 6 training at Runestone under Lord Royce. If you didn't spot Robyn in the council scene, it's probably because he's undergone a major transformation, as some fans have happily taken note of on Twitter.

6 There was a modern drink in a scene. Again.

Two weeks after #Coffeegate, yet another anachronistic drink container managed to weasel its way into one a Thrones shot. This time it was a plastic water bottle, not-so-subtly tucked away behind the leg of Samwell Tarly. You'd think that after getting taken to task by the internet for failing to spot a coffee cup in "The Last of the Starks," someone involved in Thrones' production would've made a point to scrub through every shot in the remaining episodes to make sure no other modern conveniences sneaked their way in... but apparently, you'd be wrong.

7. The Unsullied were headed to Missandei’s homeland

Before the Battle of Winterfell, Grey Worm and Missandei had a touching conversation about how, once the fighting was done, they would make new lives for themselves in her homeland of Naath. Missandei mentioned that she worried for her people, because they were peaceful and had no one to protect them, and Grey Worm said that he would be the one to keep them safe.

In the finale, Grey Worm is shown sailing away with the Unsullied, and so it appears that although Missandei is gone, he's still set on keeping his promise to her. In Naath, he'll hopefully open the door for the Unsullied to live in peace, far away from the horror and violence of war.

8. At some point in time, Sam became a full-fledged maester

Although Sam never finished his training at the Citadel, and seemed to buck the celibacy vows that maesters have to take by continuing his relationship with Gilly, it is revealed in “The Iron Throne” that not only has he somehow earned his chains, he’s been appointed Grand Maester. Sam now sits on the Small Council, making him the highest-ranking maester in Westeros.

Presumably, this will make his child with Gilly the new head of House Tarly once she gives birth, since Sam would’ve had to drop his family name before joining the Order of Maesters. Unless, of course, one of King Bran’s first acts, not shown to viewers, was to change all the rules for the maesters so that Sam could still be with Gilly and represent House Tarly.

9. Jaime's entry in the White Book of the Kingsguard was even more bittersweet than you realized

Before Brienne finds the entry for Ser Jaime Lannister, she sees an entry for Ser Barristan Selmy, who died saving Grey Worm from the Sons of the Harpy back in Season 5. Ser Barristan, in turn, is likely the one who wrote the beginning of Jaime’s entry in the book, since the handwriting matches his own entry and chronicles his knighthood through his pardon from Robert Baratheon, when Selmy was serving as Lord Commander of the Kingsguard.

However, the amendment to include Jaime’s nickname of “Kingslayer” was likely written by Jaime himself, as there’s a noticeable handwriting change between his pardon from Robert Baratheon and the mention of his new moniker. This would’ve probably happened when Jaime was serving as Lord Commander under Joffrey and Tommen, and further goes to show just how much Jaime struggled with his own complicated history.

10. Brienne and Podrick both got significant promotions

While it’s not stated outright, it’s easy to infer from Brienne’s presence on the Small Council, her gold armor, and her role in updating the White Book that she is now serving as Lord Commander of the Kingsguard. Considering that all she has wanted throughout Thrones is to be taken seriously, it’s fitting that she now outranks everyone in a position that commands respect from the entire kingdom. And it seems as though one of her first acts as Lord Commander was to knight her loyal squire, Podrick Payne, whose final scene in the series sees him in full Kingsguard armor being referred to as “Ser Podrick.”

11. Bran may have tried to warg into a dragon

After Sam informs Bran that Drogon was last seen flying east, Bran cryptically tells his Small Council, “Perhaps I can find him. Do carry on with the rest.” Ser Podrick then arrives to escort Bran out of the room to somewhere more private. While it’s very possible that Bran is just going to go warg into some birds again, he might be attempting to warg into Drogon himself.

Not only would this open up some intriguing possibilities for the future of Westeros — maybe Targaryens aren’t the only rulers who can hold onto their power using dragons? — but also hints at some interesting thematic parallels between the Dragon Queen that just died, and the potential new Dragon King that was just crowned.

12. There were a lot of nods to The Lord of the Rings

George R.R. Martin has said that he's aiming for the ending of the A Song of Ice and Fire series to be reminiscent of J.R.R. Tolkien’s scouring of the Shire in The Lord of the Rings, and while it's not yet known what the book's conclusion will be like, the GoT series finale certainly nods to LotR. The shot of Drogon gently collecting Daenerys’ body into his talons and flying off is very similar to the shot in the Return of the King movie when the eagles carry a nearly dead Frodo and Sam to safety. “The Iron Throne” also mirrors that film in how it fades to black near the ending, and then keeps going. Additionally, the Stark siblings' farewells taking place on a dock is similar to how Frodo bids goodbye to his friends before setting sail for the Undying Lands in LotR.

Arya’s ending could also be a nod to Frodo, since both characters ultimately decide that they are too changed by their journeys to ever be able to lead contented lives in the places where they’ve grown up so instead go off sailing to mysterious new worlds. And of course, Sam giving Tyrion a literal bound copy of A Song of Ice and Fire at the end seems like a pointed nod to both Bilbo and Frodo’s authoring of The Hobbit and The Lord of the Rings within the text of the stories themselves.

More like this
8 shows like 'Ted Lasso' to watch if you need more feel-good TV
By Brandon Yu
Dua Lipa has officially distanced herself from DaBaby
By Kara Weisenstein
What could possibly explain Carrie Bradshaw shopping at Forever 21?
By Kara Weisenstein
Stay up to date