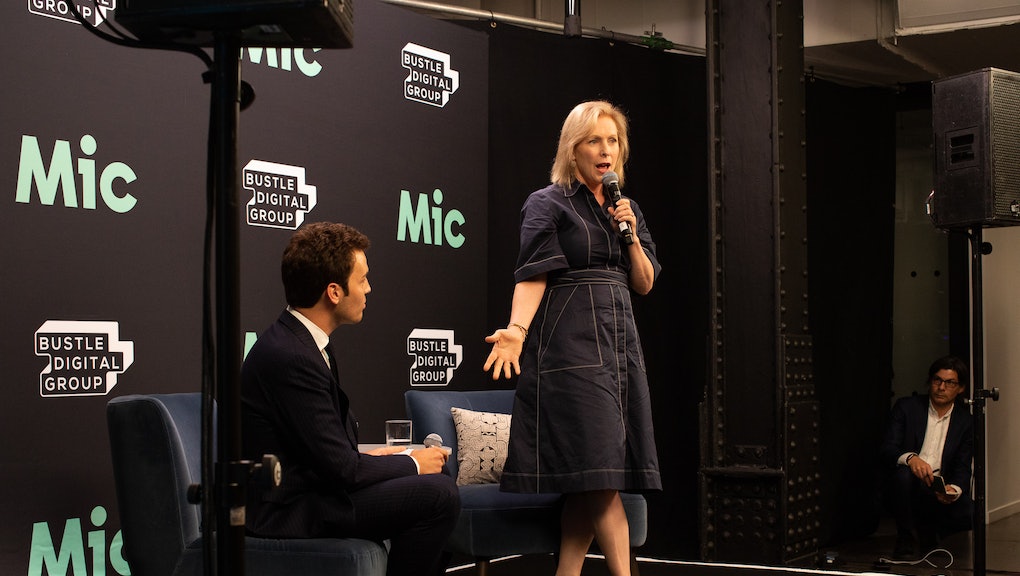 18 Kirsten Gillibrand quotes that prove she's a candidate to watch

To say that the 2020 presidential race is a crowded field is an understatement; there are currently 24 Democrats vying for the job, and with many months between now and the election, it hasn't been easy for any contender to break from the pack. Speaking at a Town Hall event on Monday, however, Senator Kirsten Gillibrand made a strong case for her candidacy.

At an event held at BDG's New York offices, the politician spoke passionately on issues ranging from immigration reform to sexual assault in the military. On President Trump's attacks on the Congressional "Squad", for instance, the senator didn't hesitate to call his words "racist" and strongly condemned Trump for his actions. She was equally forceful when discussing the sexual misconduct allegations against former Senator Al Franken and her support for his numerous accusers.

As noted during the July 22 event, Gillibrand is far from the leading candidate in the Democratic race; recent polling has placed her at less than one percent. Despite these odds, the senator is determined to stay in the race and win over more voters — and as her best quotes from the Town Hall show, she's certainly got a fighting chance.

"After I Clorox the Oval Office, I will then restore our moral leadership on the world stage."

When asked what she'd do on her first day as president, Gillibrand gave a well-received answer that showcased her sense of humor and her strong stance on the president.

Addressing concerns about how she would help women of color as president, Gillibrand acknowledged her own privilege and its power.

In recent weeks, Trump has publicly condemned four Congresswomen of color — Alexandria Ocasio-Cortez, Ilhan Omar, Ayanna Pressley, and Rashida Tlaib — by calling them "not very smart" and "weak" and telling them to "go back and help fix the totally broken and crime infested places from which they came." These comments received significant criticism, and when asked about them during the Mic Town Hall, Gillibrand made her position loud and clear.

"I'm sorry we have a president who continually degrades, demeans, and devalues our immigrants, our DACA kids, our dreamers."

After an undocumented college senior asked Gillibrand what she would do as president to provide citizenship to immigrants, the politician first apologized for the current administration's policies and behavior.

"The Statue of Liberty used to stand for something. 'Send us your tired, your poor, your huddled masses yearning to breathe free' — just not under this president."

Gillibrand continued to express her frustration with the current state of American politics, especially in regards to immigration.

"There is no prize for someone who tries to hold accountable a powerful man who is good at his day job. But we should have the courage to do it anyway."

When eight allegations of sexual misconduct against Al Franken came to light in 2017, Gillibrand was the first senator to speak out against her colleague and push for his resignation. At the time, she received pushback for her stance, but at Monday's event, she expressed no regret for standing by Franken's female accusers.

"Blaming a woman for the actions of a man, I don't know, I don't believe in it, and I don't think it's right."

Earlier on Monday, The New Yorker published a piece on the Franken case claiming that some of Gillibrand's colleagues regret asking for his resignation. When asked if she also had any regrets about leading the charge, Gillibrand not only said no, but added that she doesn't appreciate being blamed or criticized for what was ultimately Franken's decision.

"I don't think it needs socialism. I think it just needs activism."

When asked why she doesn't believe socialism can work in America, Gillibrand explained that it's just as corruptible a system as capitalism — adding that if people truly want more equality, activism is key.

"Our future is about lifting up every voice, not demonizing the vulnerable.”

The candidate summarized her entire platform with this powerful quote.

"Pass the Green New Deal. It’s not that hard."

Gillibrand emphasized her support for the Green New Deal, the economic package meant to address climate change and U.S. inequality.

"When is civil rights ever convenient? You have to do it because it's the right thing to do."

Gillibrand recalled making this statement to her fellow Democrats when she argued for the repeal of Don't Ask, Don't Tell in 2010.

Gillibrand defended her change in stance on several key political issues over the years by saying that they proved she was willing and able to learn from her mistakes.

"If this party thinks by not valuing women they're going to beat Trump, well, they're wrong."

Gillibrand, who touts herself as "the best candidate for women," argued that it's crucial for politicians to listen to women voters and take them seriously.

"The fact that Facebook was more concerned with their profits and the American people, I think is shameful."

Gillibrand did not mince words when discussing the connection between Facebook and Russian interference in the 2016 election.

Gillibrand argued that money needs to be taken out of politics so that elections and legislating can be truly democratic processes.

"I bring people together and I don’t do it by compromising our values."

Explaining why she feels that she's the best candidate for president, Gillibrand made this simple but powerful statement.

"I am willing to take on the fights that other people won’t. And it's why I’m running for president."

And then she followed it up with this equally strong statement.

And finally, to end the night, Gillibrand said this — and after her performance in the Town Hall, it certainly felt convincing.

Check out the full video of Gillibrand's Town Hall conversation below.

More like this
Lindsey Graham just can't quit Donald Trump
By AJ Dellinger
FEMA said it would reimburse cities for housing homeless people. Most cities ignored the offer
By AJ Dellinger
Title IX will once again protect against gender identity discrimination
By Rafi Schwartz
Stay up to date