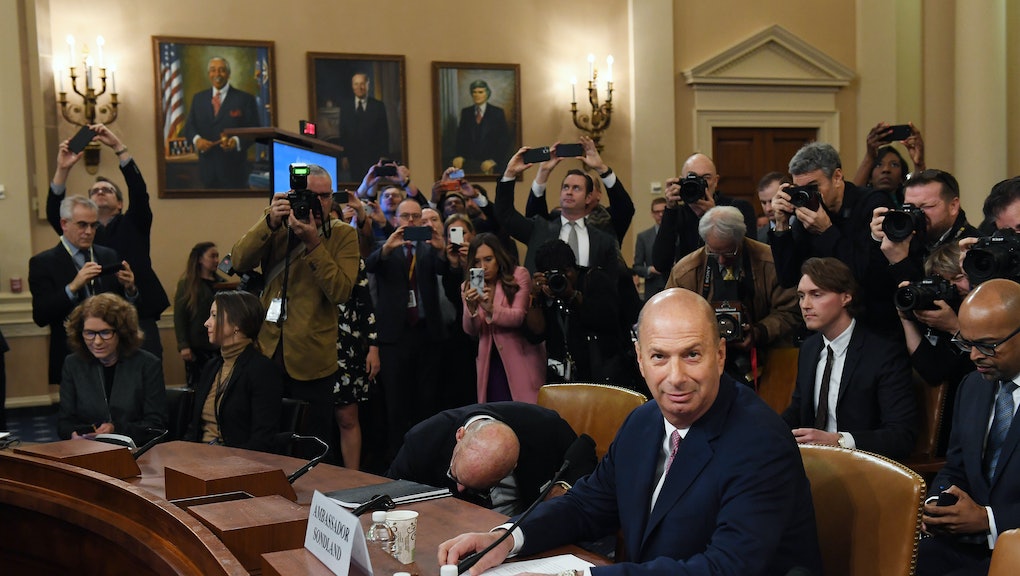 At the beginning of the week, pundits questioned whether President Trump’s ambassador to the European Union, Gordon Sondland, would come to the impeachment hearings ready to stonewall — or whether he'd show up to Capitol Hill fully prepared to throw Trump and his associates under the bus. Mere minutes after he began his testimony Wednesday, it became evident he was erring more toward the latter.

While Sondland’s testimony drove the news cycle this week, Fiona Hill, a former Russia expert for the National Security Council, and David Holmes, an American diplomat for Ukraine, also provided statements in open testimony that do not look good for Trump’s “no quid pro quo” line of defense from impeachment.

Not everyone has hours to watch live impeachment hearings in the middle of the work day, so we compiled a list of the five most important statements from this week’s testimony.

1. “Was there a quid pro quo? As I testified previously, with regard to the requested White House call and White House meeting, the answer is yes.” —Gordon Sondland

Since the whistleblower’s original statement came to light, Trump and his allies have vehemently denied that the president insisted on a “quid pro quo” for Ukraine, in which Ukraine had to announce public investigations into Trump’s political rival, former Vice President Joe Biden, in order to secure congressionally-approved military aid and a White House meeting with Trump. Democrats have since started calling this arrangement “bribery.”

One of Trump’s original defenders was Sondland himself, who in his initial deposition in October fully denied the existence of any sort of quid pro quo. Yet mere weeks later, after reports had trickled out from other witnesses' depositions, Sondland provided a revised four-page memo in which he completely reversed what he had initially said and acknowledged there had been preconditions for the aid.

Wednesday’s testimony was a spectacular blow to Trump, as Sondland repeated the information from his revised statement on TV, providing publicly the sort of “smoking gun” Democrats have sought throughout this investigation.

While he admitted the quid pro quo as it relates to a White House meeting for Zelensky — which would have provided the new Ukrainian president with an air of legitimacy that he craved — it's worth noting that Sondland did not confirm a quid pro quo in relation to the nearly $400 million in aid to Ukraine that Trump had ordered frozen. The aid was eventually disbursed.

Sondland's hesitancy on the aid question makes some sense, given that the aid money is directly related to Ukraine's national security and the American goal to quell Russian aggression in the region. But it's hard to take his assertion at face value that while the meeting was definitely part of a quid pro quo, the aid wasn't, necessarily.

2. “Everyone was in the loop. It was no secret.” —Gordon Sondland

Not only does this Sondland statement acknowledge that there was a quid pro quo, it also implicates Trump directly as having had knowledge of the arrangement. It's worth wondering whether Sondland reversed his original statements to investigators because it became increasingly clear that he could wind up being the fall guy for the whole affair, once the defense stopped being “no quid pro quo” and started being “no quid pro quo that Trump knew about.”

After all, Sondland was one of the officials involved in text messaging transcripts released last month, in which he and former ambassador Kurt Volker vigorously shut down questions from Bill Taylor, America's top diplomat in Ukraine, about the machinations around the aid and the White House meeting. In the transcripts, it seems that Sondland and Volker were specifically trying to prevent leaving any sort of paper trail.

Sondland’s testimony suggests that he began to see the writing on the wall. At some point, someone involved was going to need to be the scapegoat if people wanted to keep Trump out of the fray.

With his testimony, Sondland confirmed that not only Trump, but also Secretary of State Mike Pompeo, acting Chief of Staff Mick Mulvaney, and Vice President Mike Pence were all complicit in, or at least aware of, the negotiations with Ukraine. That's a lot of high-level White House officials.

Even if Trump does not get removed by the Senate, it’s hard to imagine a world in which he does not get impeached by the Democratic majority in the House. When his own people are turning against him under oath — Sondland is a Republican donor and Trump appointee — his credibility and reputation stand to suffer more damage.

3. "You understood that Mr. Giuliani spoke for the president. That's correct?" —Daniel Goldman, the Democratic counsel

Sondland's critics have pointed out that he was never explicitly directed by Trump to enforce a quid pro quo with Ukraine. Yet during this exchange with the Democratic lawyer, Goldman pointed out that Trump kept telling Sondland and others to speak to his personal attorney, Rudy Giuliani, about Ukraine. Giuliani who then would tell them to withhold meetings and calls until the Ukrainians publicly announced their intentions to look into Biden and his son Hunter.

While this exchange feels quick, it in fact transforms what Trump defenders are calling “hearsay” into an intentional game of telephone that allowed Trump’s orders to be carried out without him having to deliver them explicitly. The president's former personal lawyer, Michael Cohen, told Congress earlier this year would often give orders in an elliptical way, where no illegal action is requested outright but his true intentions are made known.

To reiterate: Giuliani is Trump’s personal lawyer. He is not a federal employee, an elected official, or a diplomat. For the president to direct his ambassadors, as well as the president of a foreign country that relies on U.S. aid for national security, to listen to his personal lawyer on policy matters is troubling enough in itself. To confirm that Trump potentially did this to avoid responsibility for giving orders he possibly knew to be unethical — if not illegal — is devastating.

4. "Some of you on this committee appear to believe that Russia and its security services did not conduct a campaign against our country — and that perhaps, somehow, for some reason, Ukraine did. This is a fictional narrative that has been perpetrated and propagated by the Russian security services themselves." —Fiona Hill

Despite American intelligence agencies having concluded that Russia interfered in the 2016 election, many Republicans, Trump, and Giuliani have been pushing a conspiracy theory that it was actually Ukraine. Hill put this theory to rest immediately.

At the Helsinki Summit in July 2018, Trump received flack from people across the political spectrum after he seemed to take Russian President Vladimir Putin’s word that Russia had not interfered in the American election in 2016 — over the findings of American intelligence agencies. In making this statement, Hill was completely dismissing the unfounded conspiracy theory that Ukraine may have attacked the United States, while also pointing the blame at a source that has proven to be sensitive for Trump: Russia.

5. "I believe that those who have information that the Congress deems relevant have a legal and moral obligation to provide it.” —Fiona Hill

Hill said this straightforward line in the beginning of her opening statement for two reasons. First, she was trying to establish herself not as a partisan hack, but rather as a career policy expert.

“I take great pride in the fact that I am a nonpartisan foreign policy expert, who has served under three different Republican and Democratic presidents,” she said. “I have no interest in advancing the outcome of your inquiry in any particular direction, except toward the truth.”

Second, it seemed that she was putting pressure on other foreign affairs officials to also accept their responsibility to show up and testify to the truth. One possible target of her words in particular? Trump's former national security adviser, John Bolton.

Hill recounted hearing Bolton describe Giuliani as a “hand grenade” and talked about how visibly uncomfortable Bolton became in a meeting where Ukrainian officials asked for a White House summit.

“Ambassador Sondland leaned in and said, ‘Well, we have an agreement. There will be a meeting, subject to investigations.’ That’s when I saw Ambassador Bolton stiffen,” described Hill, who was also present. “For me, that was unmistakable body language that caught my attention.”

It will be interesting if more individuals — particularly those who were mentioned by name, including Bolton and Pompeo — decide to defy the White House's order and comply with the investigation. If they're being spoken about, it seems they might have incentive to speak for themselves.