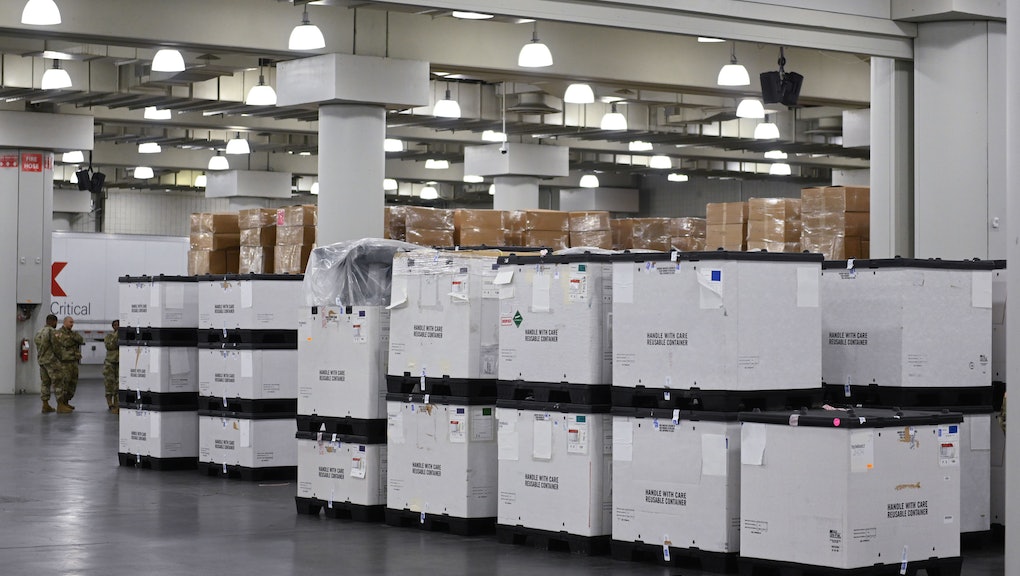 Individual states are responsible for gathering medical equipment during the ongoing coronavirus pandemic. But recent reports suggest that the federal government has intercepted states' orders for needed medical supplies. Accusations have come from officials in at least six states so far, all while President Trump has consistently made acquiring crucial health care equipment into a state-level issue, not a federal one.

When coronavirus first began to spread in the U.S., many state officials hoped to receive federal aid. In March, Trump dashed those dreams, telling governors during a conference call, "Respirators, ventilators, all of the equipment — try getting it yourselves. We will be backing you, but try getting it yourselves. Point of sales, much better, much more direct if you can get it yourself."

With no other options, states began scrambling to gather their own supplies. Vanity Fair reported that many state governors complained that Trump's directive and the ensuing bidding wars raised the costs of limited medical resources.

That was only the beginning. The Los Angeles Times then reported that Trump put the Federal Emergency Management Agency in charge of distributing equipment according to priority. On April 3, Colorado Gov. Jared Polis (D) told CNN that the state was finalizing a deal for ventilators when FEMA swooped in and took them instead.

FEMA spokeswoman Lizzie Litzow denied that the agency is seizing any shipments. Litzow told The New York Times, "FEMA realizes that prioritizing [personal protective equipment]. deliveries to [coronavirus] hot spots can have the unintended consequence of disrupting the regular supply chain deliveries to other areas of the country that are also preparing for the coronavirus."

Colorado isn't the only state expressing frustration. Reports have come from officials at state and local levels in Massachusetts, New Jersey, Kentucky, Texas, and Florida. Shanel Robinson, the freeholder director of the community of Somerset County, New Jersey, said that her order of 35,000 N95 masks was diverted by the federal government. She is unsure where the masks ended up.

Similarly, officials at a medical system in Massachusetts weren't able to figure out where an order of masks went. One official told the Los Angeles Times, "Are they stockpiling this stuff? Are they distributing it? We don't know. And are we ever going to get any of it back if we need supplies? It would be nice to know these things."

"The notion of the federal stockpile was it's supposed to be our stockpile," Kushner said at one of the president's daily coronavirus briefings. "It's not supposed to be states' stockpiles that they then use."

These diverted orders raise a number of concerns. It's not just about the one order of masks or ventilators that is now gone — but it also raises doubts about any future orders to come. As Polis told CNN, "We cannot compete against our own federal government."

"So either work with us, or don’t do anything at all," he continued. "But this middle ground where they’re buying stuff out from under us and not telling us what we’re going to get, that’s really challenging to manage our hospital surge and our safety of our health care workers in that kind of environment."

At a news briefing last week, New York Gov. Andrew Cuomo (D) said, "What sense does this make? The federal government, FEMA, should have been the purchasing agent, buy everything, and then allocate by need to the states. ... Why would you create a situation where the 50 states are competing with each other, and then the federal government and FEMA comes in and competes with the rest of them?"

With additional reports showing that the Trump administration basically ignored coronavirus for two months, the mad scramble for supplies now isn't surprising. But as the confirmed coronavirus death toll climbs to nearly 13,000 in the U.S., the federal government shouldn't be hindering its own states in the middle of a pandemic.

More like this
FEMA said it would reimburse cities for housing homeless people. Most cities ignored the offer
By AJ Dellinger
The CDC's eviction freeze has been unfrozen by a federal judge
By Rafi Schwartz
The CDC just announced the mask era is coming to an end (sort of)
By Rafi Schwartz
Stay up to date