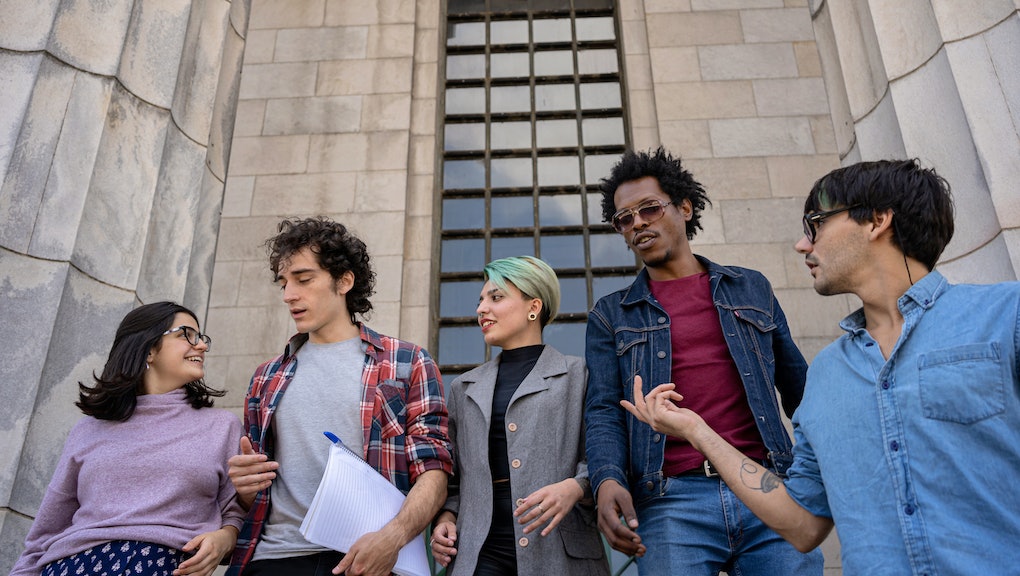 Just as universities across the country have finally begun to address the heavy uncertainty surrounding the upcoming academic year, college students now face an entirely new hurdle: that their international peers risk losing their U.S. visas.

On Monday, Immigration and Customs Enforcement announced that international students must leave the U.S. if they do not attend universities with in-person instruction. Two days later, Harvard and MIT initiated a lawsuit against the Trump administration; universities like Carnegie Mellon and Penn State joined the suit shortly after. Many more have decried the recent measure in emails to their student bodies and announced efforts to satisfy the guideline's requirement for in-person instruction.

In a report published this year, the educational nonprofit NAFSA estimated that nearly 1.1 million international students in the U.S. contributed a stunning $41 billion to the domestic economy during the 2018-2019 academic year. They also found that 3 domestic jobs were supported or created for every 7 international students who studied in the U.S.

The U.S.'s hostile social and political environment and exhaustive visa application process were among two of the leading factors that had discouraged international students from pursuing higher education in the country, causing a decrease in enrollment since 2016. But the latest visa restriction — in addition to the administration’s lacking and late pandemic response — may only deepen these students' hesitance. And this is a problem; with international education occupying the spot as the country’s fifth-largest service sector export, ICE's measure will prove to be a heavy price in terms of our domestic economic future and international relations.

Speaking to this murky new reality, 8 international students reflect on how the latest measure has impacted their presents and futures.

I decided to study in the United States because of the quality of the liberal arts education that is analytical and research-driven in nature, which is not readily available in my home country of India. I have been able to dabble in theatrical experiences like improv and sketch comedy that are still novel concepts in India, and which I only explored coming to college. The myriad of software engineering opportunities in the United States are unparalleled, and I am keen to take advantage of them in the future through internships.

I am scared, deeply, as the recent F-1 visa policy by ICE is a chess move of evil and a lose-lose situation for international students. Students run the risk of entirely losing the degree progress they have been studying for by getting their F-1 status revoked. But, if international students get COVID-19 by attending in-person classes, they risk their health in another country, where they have poor to no insurance, lack of a medical base, no familiarity with doctors or hospitals, and no personal contacts. I cannot risk getting sick either, because if I request a leave of absence from the university, it doesn’t guarantee my return.

I am scared, deeply, as the recent F-1 visa policy by ICE is a chess move of evil and a lose-lose situation for international students.

I came to the U.S. because I wanted an education that can open up my world view and help me grow as a person — and not just to take tests. I went to NYU for my undergraduate degree. I loved the energy and the multiculturalism of NYC, so I chose to go to Columbia for graduate school to remain in the city. I was back home in Shanghai before starting my master’s education. Now, I face travel and visa restrictions to come back to NYC.

It seems impossible to for me to pursue my master’s degree as planned, so I started a full-time job here in Shanghai instead. I think the visa policy right now is unfair for international students because they worked so hard to pursue their dreams, and the policy disregards our hard work and financial contribution to the U.S. economy, as well as our health. Right now, so many students are in an unprecedented, difficult position to make crucial decisions for their future.

I was born and raised in a homophobic environment in Medellin, Colombia. At the age of 16, I decided to come to California with the purpose of educating myself in an open environment where I could prove to my community that being gay was not a disability. I left my whole family behind, but throughout these last five years, I have found many amazing families and communities in my universities who have taken me as their own child.

The issue with the policy is not so much that I can not finish my degree, but that the safe space that I had created is going to be taken away from me very soon, forcing me to go back to Colombia.

The issue with the policy is not so much that I can not finish my degree, but that the safe space that I had created is going to be taken away from me very soon, forcing me to go back to Colombia.

I decided to study in the U.S. because I wanted a holistic education incorporating the sciences and the humanities, unlike the one I would gain in India. While coming to school here was a bit of a culture shock initially, I have grown to love my college and New York City. I have forged close connections with students from the U.K., U.S., Pakistan, Japan, China, and Hong Kong, to name a few, and had it not been for them, I wouldn't have grown as a person or be as culturally sensitive as I am today.

In a time like this where the global situation is constantly evolving, ICE's rules put students in already traumatic situations at further risk. The recent rules imposed by ICE on international students don’t take into account the adverse circumstances many students all over the world are in — some are unable to return home, and some are in unsafe home environments in drastically different time zones. Rules all over the world have been bent to accommodate for the current unprecedented situation, and ICE should offer a similar accommodation for international students.

The liberal arts schools in the U.S. gave me chances to explore my interests before landing on a specific major — that’s why I decided to study in the U.S. in the first place! I loved the classes I took so far, and I’m looking forward to all the other classes and opportunities at my university.

Though the decision has yet to be made, I’m very stressed about the housing issues if administrators kick us out after Thanksgiving break. The visa policy is a big hit to international students; if their schools are in hybrid mode, these students will have to either find a way to come back to the school or give up their F-status. I can feel the stress, and it’s definitely not a kind policy for international students — but we can still survive if our schools support us.

This would mean I would have to sort out logistics and flights to go home in less than 10 days.

I decided to study in the U.S., specifically New York, for a better education and exposure to more professional opportunities. Being an international student has been an incredibly valuable experience, and I've made friends from all around the world whom I would not have met otherwise. But the recent change in visa policy has been confusing and worrying. I'm particularly worried about the unstable COVID-19 situation in the U.S. I’m concerned about the rapid rise in cases, and the possibility of my school, which has announced that fall will be a hybrid model, going fully online mid-semester. This would mean I would have to sort out logistics and flights to go home in less than 10 days.

Whether or not students will be offered financial support in this scenario is also unclear.

I decided to study in the USA due to a number of reasons but primarily because I thought the art schools in America were really good. Pratt Institute has always been a college I dreamed of studying in. My experience so far has been great. I’ve learned so many things I thought I never would — not just academically but personally, I’ve seen myself transform into this independent person.

As of right now I know that the visa policy has changed a lot for many people and I do think it has affected me. This is mainly because I intend to do online classes in the fall, but if I choose to do so, my visa will be suspended / terminated, and I would have to reapply for my F-1 student visa. Going through this process all over again is definitely not the easiest thing. But I don’t think that this could change my decision about not going back — I honestly think it’s more important to be safe right now than anything else.

Many people come here because of cultural diversity — that’s something a lot of other countries don’t have. But, the U.S. is abandoning that advantage, and it is becoming a more xenophobic, political environment.

I’ve been in the U.S. for many years now. I’ve always thought that the U.S. was welcoming and embracing of diversity, up until now. I feel like many people come here because of cultural diversity — that’s something a lot of other countries don’t have. But, the U.S. is abandoning that advantage, and it is becoming a more xenophobic, political environment.

Many international students who study in the U.S. are very talented and hardworking, and the world acknowledges their performance and their ability. That’s why countries like the U.K. and Canada are becoming more welcoming to international students, but the U.S. is doing the opposite. I personally feel like this will be a loss for the U.S.

More like this
March Madness might be over, but the fight for gender justice continues
By Lindsey Darvin, Anita M. Moorman and Ann Pegoraro
New York has set aside a massive, first-of-its-kind fund for undocumented workers
By Rafi Schwartz
Jailhouse lawyer Johnnie Cook is fighting for pandemic justice
By Mai Tran
Stay up to date