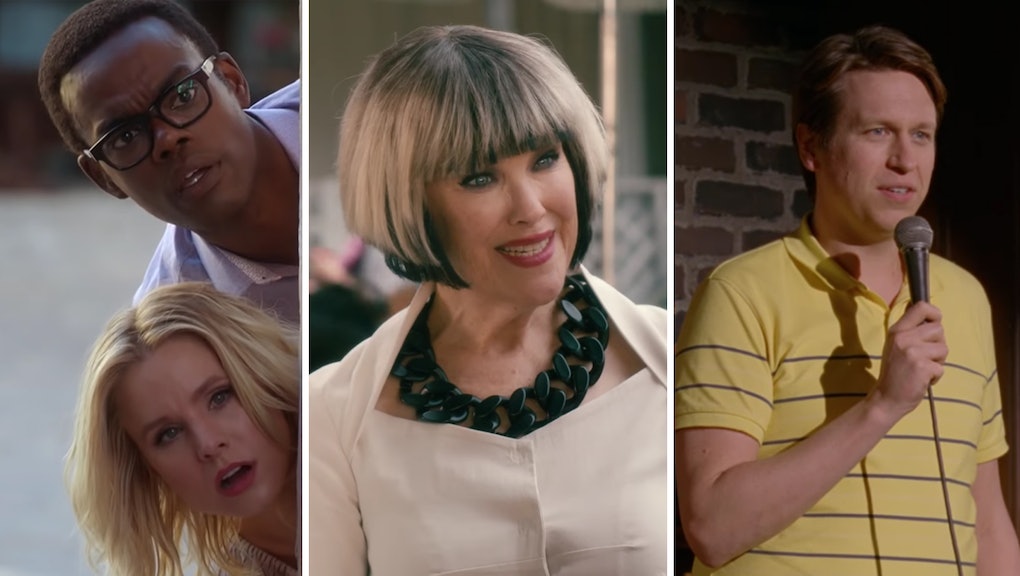 Has there ever been a greater collective need for the ethos of our beloved Ted Lasso? It’s probably why the Apple TV+ show about the unwaveringly optimistic football (the European kind) coach played by Jason Sudeikis became an unexpected sensation after debuting last August. As we all stood witness to mass death, the persistent reminder of our destabilized planet, and a relentless cascade of upheavals; the aphorism-laden, midwestern drawl of the mustachioed Coach Lasso seemed to act as a balm.

Last fall, Sudeikis (somewhat unexpectedly) took home a Best Actor Golden Globe for his work on the show, which surely helped boost viewership, but it's likely the improbable pureness of his character that turned the comedy into a sleeper pandemic-hit. The idea of "feel-good" TV isn't new. Sitcoms, of course, are largely built on that notion, and some even mirror Ted Lasso’s central thematic tenets of human decency and teamwork (i.e. Parks and Recreation). Even so, right now, Ted's unassailable tenderness seems to click with audiences in a unique way — which is why Ted Lasso Season 2 has arrived at just the right time.

Yet, for those of us who came to Ted Lasso Season 1 somewhat late and binged our way through AFC Richmond's trials and tribulations, the new season will have to be a more tempered affair: After Ted Lasso Season 2 premieres on July 23, its 12 new episodes will arrive in weekly installments. The balm will have to be applied sparingly. In the meantime, here are nine shows like Ted Lasso — as far as feel gooded-ness goes, at least — that will hold you over as you wait for Ted's weekly pep talks (and accompanying delightfully convoluted analogies).

This is perhaps the most predictable entry that mirrors Ted Lasso's energy, and for good reason. The show is unwavering in its belief in helping others and working together, as naive as it might seem. Leslie Knope (Amy Poehler) isn't exactly the same as Ted Lasso — her kindness is also beset by an often stubborn, begrudging rashness — but she and the reluctant familial trust she builds among her staff is as about as close as you can get to Ted and his football squad.

If a Golden Globe helped people pay attention to Ted Lasso, a record nine Emmys for its final season did the same for Schitt’s Creek. The shows also bears a similarity in its lesson of being good to others. It’s not exactly the same, though. While Ted Lasso can’t help but smile at life from the get-go, the Rose family at the center of Schitt's Creek begins the show as fundamentally self-absorbed and cynical, sneering at everyone after losing their fortune and being relegated to life in the titular small town. But that slow arc into goodness (and the impeccable dry humor) is at the core of the show’s appeal.

Part of what makes Ted Lasso's relentless cheer work is that, in the first season, it's counterbalanced and complicated by the pain of Ted’s crumbling marriage and his struggle to let go. There's a similar dynamic in comedian Pete Holmes’s short-lived HBO series Crashing (the show was cancelled in 2019 after three seasons). Pete, a fictionalized version of Holmes, is a happy-go-lucky Christian man who wants to become a stand-up comic, an improbable dream that's pushed into high gear after he walks in on his cheating wife. The series is by no means a happy journey — as a behind-the-scenes peek into the New York stand-up scene, it can’t really be — but it contains that dichotomy of determined niceness and tragedy that Holmes balances well, just like Sudeikis does with Ted.

Perhaps no current long-running show so reliably maintains a sense of comforting warmth the way Bob’s Burgers has. For most sitcoms, that thread begins to fray after several seasons — falling to increasingly implausible storylines, an undercurrent of cynicism, or worse yet, a cheap kind of Flanderization. Bob’s Burgers sharpened its conceit — following the whimsical seaside exploits of the Belcher family in and around their burger joint — early on and has stuck steadfastly to its DNA. It's a show that isn’t but-gusting in its humor, but always projects an easy wholesomeness that never fails as a pick-me-up.

If Bob’s Burgers is already a familiar source of entertainment, and you simply need another iteration of the warm hug it gives, the new comedy The Great North does the trick. Understandably so, as the animated sitcom is executive-produced by Bob’s co-creator Loren Bouchard. The show, which recently completed its debut season on FOX and has already been renewed for a second and third season, follows a family living in the wilderness of Alaska — but the tone is highly reminiscent of the Belcher shenanigans. And if one season is too short, Bouchard’s other new animated creation, Central Park on Apple TV+, is yet another Bob’s-adjacent offering.

If Ted Lasso is a show about an exceptionally good person, The Good Place is a show about how to try to be one. The acclaimed (and, especially as a network show, pretty radical) sitcom from Mike Schur — who is also behind other feel-good hits like Parks and Recreation — manages to make philosophical quandaries about ethics a heartwarming and hilarious depiction about being better. The show follows Eleanor (Kristen Bell), an objectively terrible person who finds herself seemingly placed in the afterlife-for-good-people by mistake. The many twists and turns that follow is among the best sitcom writing in recent memory and is also strikingly uplifting without being cloying.

The premise of Queer Eye, an infinitely-improved reboot of the early aughts makeover show, follows the same skeletal structure that droves of reality shows are built upon: tracking the stories of humble, everyday Americans having their lives changed dramatically. But none of those other shows manage to strike the pitch-perfect balance or depth of feeling that Queer Eye does. It's sentimental without being saccharine, and earnest and moving without feeling forced. Much of this comes down to the enduring chemistry of the Fab Five, whose roles — often veering into the territory of life coaches — tend to feel like genuine acts of love.

It might come as a surprise that such a staid show about baked goods (even the title of the show sounds like a snooze) has such a hardcore following. But it is precisely the soothing pleasantness and simple emotional warmth of this PBS program that makes it such a comfort. The show is reality competition centered around amateur bakers, but rather than the harried or scathing qualities we often associate with food competitions, The Great British Baking Show is a typically calmer affair; and in the dynamic between its judges and contestants, it radiates niceness.

More like this
The 8 best reality shows you're not watching, but should be
By Brandon Yu
Live from New York: Revisiting the totally bonkers era of post-9/11 'SNL'
By Rafi Schwartz
Steve from 'Blue's Clues' gave us the closure we didn't know we needed
By Kara Weisenstein
Stay up to date