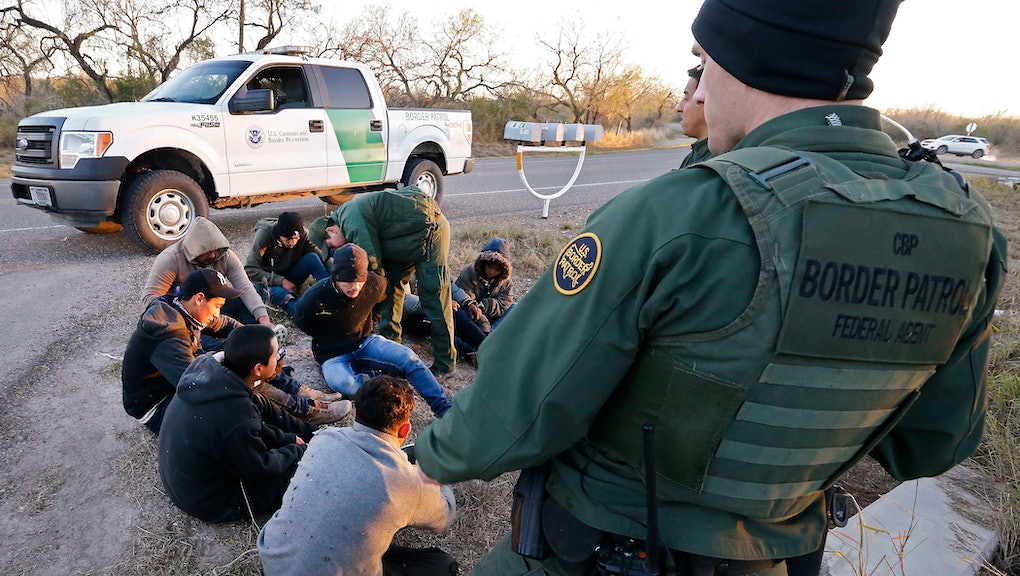 Back in December 2017, a U.S. Border Patrol Agent named Matthew Bowen allegedly hit a migrant with a car and lied about why and how the incident occurred afterwards in his paperwork. As The Washington Post reported, Bowen and other agents allegedly attempted to apprehend 23-year-old Antolin Lopez Aguilar after he jumped the border fence to cross into the U.S., and when Aguilar tried to run back towards the fence, Bowen accelerated his vehicle and hit him. Five months later, Bowen was indicted on two counts, and now, leading up to his August trial, Bowen's defense lawyer is trying to argue that hateful, racist text messages sent by the agent before the incident shouldn't be able to be used in court.

According to The Arizona Daily Star, the prosecution entered dozens of messages from Bowen in an April 4 court filing, with the intent of using the texts to show that he had "great disdain" for migrants in the weeks leading up to the incident. While all the texts entered in the filing contain racist language or animosity towards immigrants, Bowen's lawyer, Sean Chapman, specifically wants the texts in which the agent refers to migrants as "tonks" — a term referencing the sound of a migrant getting hit on the head with a flashlight by an officer — thrown out. According to the Post, Chapman plans to argue that the word is actually an innocent acronym for "Territory of Origin Not Known" and not meant to be discriminatory.

Other text messages from the court filing show Bowen calling migrants “disgusting subhuman sh*t unworthy of being kindling for a fire,” and writing “PLEASE let us take the gloves off trump!” In one exchange between Bowen and his coworkers, they discussed the best methods to tase migrants: “Did you gas hiscorpse (sic) or just regular peanut oil while tazing?? For a frying effect.”

Some of the messages even include Bowen directly addressing the day he allegedly hit Aguilar with his Border Patrol pick-up truck. “I bumped a guat with a truck while driving about 7 mph,” one text reads (a "guat" is a derogatory term used by some agents for Guatemalan migrants, per Buzzfeed News). Another says, "If I had to tackle the tonk I would still be doing memos and sh*t. I wonder how they expect us to apprehend wild ass runners who don’t want to be apprehended?"

In court documents, Chapman said that the messages aren't relevant to the Aguilar case because that the language Bowen used is “commonplace throughout the Border Patrol's Tucson Sector,” are "part of the agency’s culture," and say “nothing about Mr. Bowen’s mind-set.” However, in a later email to Buzzfeed News, Chapman said that he only intended to "say is that the term 'Tonk' is commonly used by agents," and not "that the use of racial slurs were part of agency culture" in general.

That said, Chapman's original argument wouldn't be entirely off-base. Several U.S. Border Patrol agents have been accused or convicted of crimes against migrants in the past decade, according to the organization Southern Border Communities Coalition, which keeps a database of migrant deaths related to Border Patrol since 2010. In the last nine years, 90 deaths have been recorded, including four women that former Border Patrol agent Juan David Ortiz allegedly raped and killed (he's currently on trial). There was also the 2012 shooting death of unarmed Mexican teen José Antonio Elena Rodríguez by Border Patrol agent Lonnie Swartz (who's now on administrative leave after being acquitted of involuntary manslaughter charges in November 2018). Notably, some of the texts Bowen sent about hitting Aguilar were to Swartz.

In addition to these violent incidents, The Department of Homeland Security, which oversees immigration enforcement agencies, has been accused by the ACLU of having an anti-immigrant agenda and committing multiple human rights violations at the U.S. border. According to the ACLU, agents routinely violate the religious rights of migrants, with one South Texas detention center serving a Muslim detainee pork sandwiches and nothing else for six days. Videos have captured agents destroying water and food supplied by activists for migrants crossing the desert into the U.S., immigration enforcement officers have been caught using tear gas on migrants, and since December 2018, five children have died in custody after being detained by Border Patrol.

With the Trump administration using a "Zero Tolerance" policy to separate thousands of migrant families and foster an environment of xenophobia and racism towards asylum seekers, it unfortunately makes sense that Border Patrol culture could include discriminatory behavior. Yet even if Chapman argues that's not the case, Bowen's messages clearly show his own feelings towards immigrants. Whether the texts will be thrown out is not yet known, but Bowen has pleaded guilty to one charge of deprivation of rights under color of law and one charge of falsifying records in a federal investigation. His trial is expected to begin on August 13, and he's been suspended indefinitely from Border Patrol without pay.

Meanwhile, Aguilar — who was sent to the hospital for abrasions following the incident — was sentenced to 30 days in federal prison for crossing the border illegally.