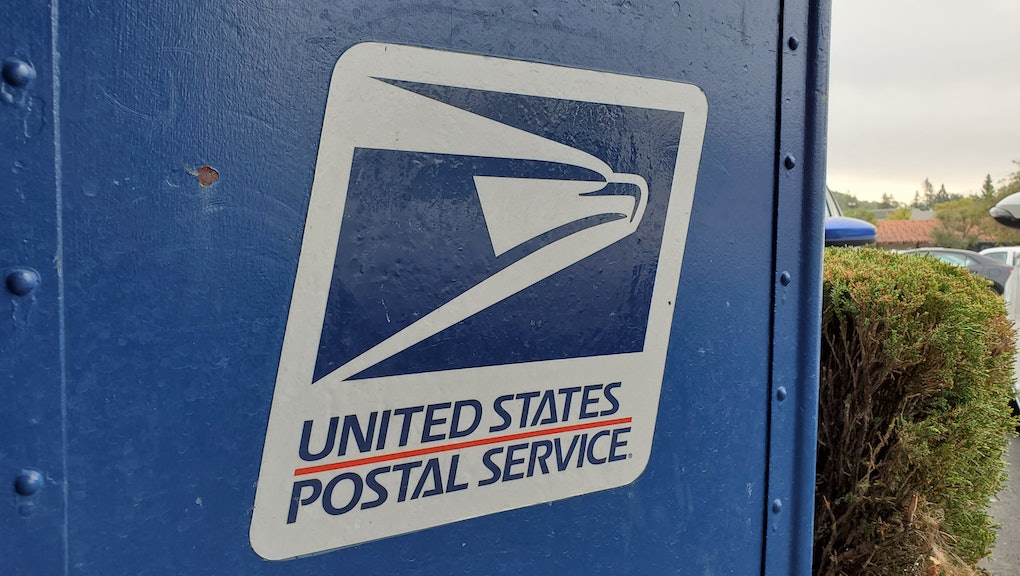 With the 2020 presidential election less than 50 days away, the United States is still scrambling to address voting during a pandemic. For many, mail-in voting is the safest and most logical choice, but President Donald Trump has waged his own war against it — in part by by going after the United States Postal Service (USPS). This week, however, a federal judge blocked changes to USPS that slowed down mail and ordered the agency to take actions to prioritize election mail instead.

After Trump appointed top GOP donor Louis DeJoy to Postmaster General, the USPS received new guidelines that slashed overtime and branch hours, and essentially made it difficult for postal workers to do their jobs. Adding to the mess, the USPS also removed over 700 mail-sorting machines — almost double the usual yearly removal amount — despite awareness of the upcoming election and the increase in mail-in voting interest.

These changes didn't read as a coincidence to many, given that Trump basically admitted he's killing the USPS to sabotage mail-in voting. But on Thursday, Judge Stanley Bastian in Yakima, Washington issued a temporary block that may throw a wrench in the president's plans. Under Bastian's order, neither the USPS nor Postmaster General Louis DeJoy may change any policies or protocols ahead of the election.

Bastian's decision comes after fourteen states sued the Trump administration and the USPS over the DeJoy-led changes. His order also requires a reversal of the changes that were already made — such as the removal of mail processing machines — calling them a "politically motivated attack on the efficiency of the Postal Service," AP News reported. In other words, the USPS now has to undo the mess it created in the past few months.

Not only that, but the judge also ordered the Postal Service to treat all election mail as first-class mail and inform all employees about the new requirements.

Washington Attorney General Bob Ferguson, who requested Bastian reverse the agency's recent changes earlier this month, celebrated the judge's decision on Twitter, calling it a "major victory in our lawsuit to protect the U.S. Postal Service."

The issues with USPS' changes extend beyond concerns around voting. There are plenty of people who rely on USPS for necessities, such as food and medication — and last week, Senate Democrats found that prescription deliveries have been significantly delayed as of late. After DeJoy's appointment, the average delivery time for prescriptions increased from 18% to 32%.

In a letter addressed to the Postal Service chairman and Board of Governors, Sens. Elizabeth Warren (D-MA) and Bob Casey (D-PA) wrote, "The findings of our investigation reveal that your failure to fix the service delays caused by Postmaster General DeJoy represent an ongoing public health threat and a dereliction of your responsibility to the American public."

Bastian, for his part, did not hesitate to name exactly what's going on. "Although not necessarily apparent on the surface, at the heart of DeJoy's and the Postal Service's actions is voter disenfranchisement," the judge wrote in his opinion, according to CNN. "This is evident in President Trump's highly partisan words and tweets, the actual impact of the changes on primary elections that resulted in uncounted ballots, and recent attempts and lawsuits by the Republican National Committee and President Trump's campaign to stop the States' efforts to bypass the Postal Service by utilizing ballot drop boxes, as well as the timing of the changes."