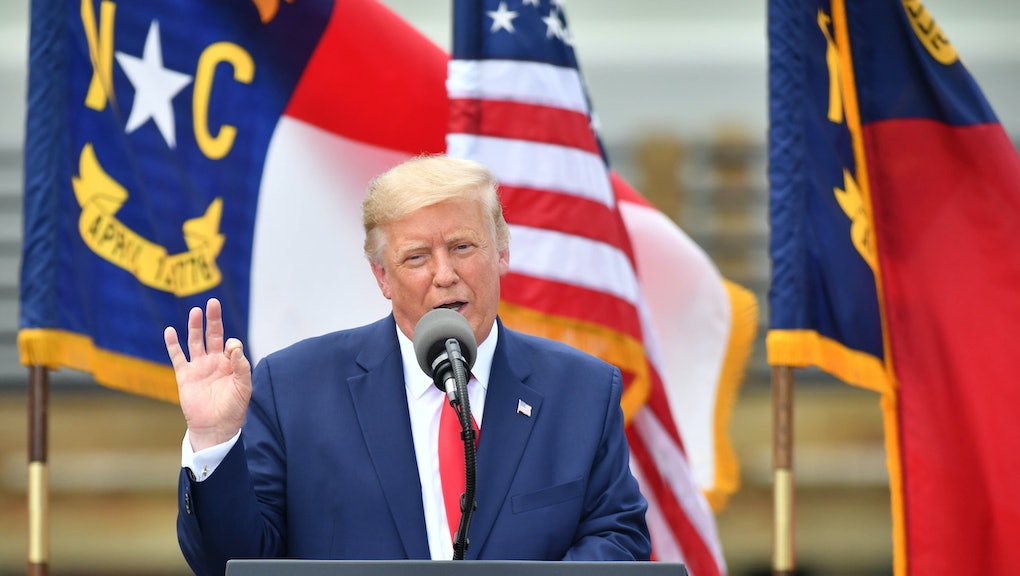 In order to delegitimize the 2020 elections before they occur, President Trump has taken every opportunity available to slam mail-in voting. But this week, Trump went one step further and made a troubling suggestion to his supporters. On Wednesday, Trump encouraged North Carolina residents to vote twice — an act that is actually 100% illegal.

Trump visited North Carolina to mark the 75th anniversary of the end of World War II. While speaking to a group of supporters at the Wilmington, North Carolina, airport, Trump said, "If you get the unsolicited ballots, send it in, and then go — make sure it counted. And if it doesn't tabulate, you vote. You just vote. And then if they tabulate it very late, which they shouldn't be doing, they'll see you voted, and so it won't count. So, send it in early, and then go and vote. And if it's not tabulated — you vote. And the vote is going to count."

The "unsolicited" ballots Trump is referring to are just mail-in voting ballots that nine states and the District of Columbia are sending out to all registered voters. However, Trump griping about them in North Carolina is funny because it's not one of the nine states that's doing so. That wasn't the only comment Trump made about voting while visiting North Carolina, though.

In a later interview, reporters asked whether Trump trusted North Carolina's mail-in voting system. As one could predict, Trump didn't have anything gracious to say about it. He told reporters, "Let them send it in, and let them go vote, and if [the mail-in] system's as good as they say it is, then obviously they won't be able to vote. If it isn't tabulated, they'll be able to vote."

"If it's as good as they say it is, then obviously they won't be able to vote. If it isn't tabulated, they'll be able to vote. So that's the way it is. And that's what they should do," Trump continued, apparently arguing that voters should knowingly attempt to illegally vote twice because if the election system is functioning, it will only count one of the person's votes.

For a second, let's ignore the fact that Trump has used mail-in voting himself, despite claiming it's "corrupt" for everyone else. Sending your supporters to "expose" a system by voting twice is not a good plan — and doubly not because doing so isn't a felony under North Carolina law. And not only is voting twice a felony but Amber McReynolds, who heads the National Vote At Home Institute, told NPR that inducing people to do so is one, also.

North Carolina's attorney general, Josh Stein, responded to Trump's comments on Twitter. "President Trump outrageously encouraged [North Carolinians] to break the law in order to help him sow chaos in our election. Make sure you vote, but do NOT vote twice!" he urged. "I will do everything in my power to make sure the will of the people is upheld in November.”

Trump's comments follow his trend of trying to smear mail-in voting as fraudulent after a failed attempt to postpone the elections. Last month, Trump basically admitted that he's trying to kill the United States Postal to sabotage mail-in voting, which is reputed to help Democrats but actually isn't as clear-cut as that.

Recently, Josh Mendelsohn, the CEO of data firm Hawkfish, which works with Democrats, warned that Trump is trying to create a "red mirage." This, Medelsohn says, is a scenario where it may look like Trump won the election initially, but he ends up losing after all the mail-in votes are tallied.

That's why Trump is sowing false rumors about fraud and illegitimacy now. If mail-in ballots prove to be his demise after he's spend months doing everything he can to claim that mail-in voting and in fact the entire 2020 election are illegitimate, it's not going to be a pretty picture.