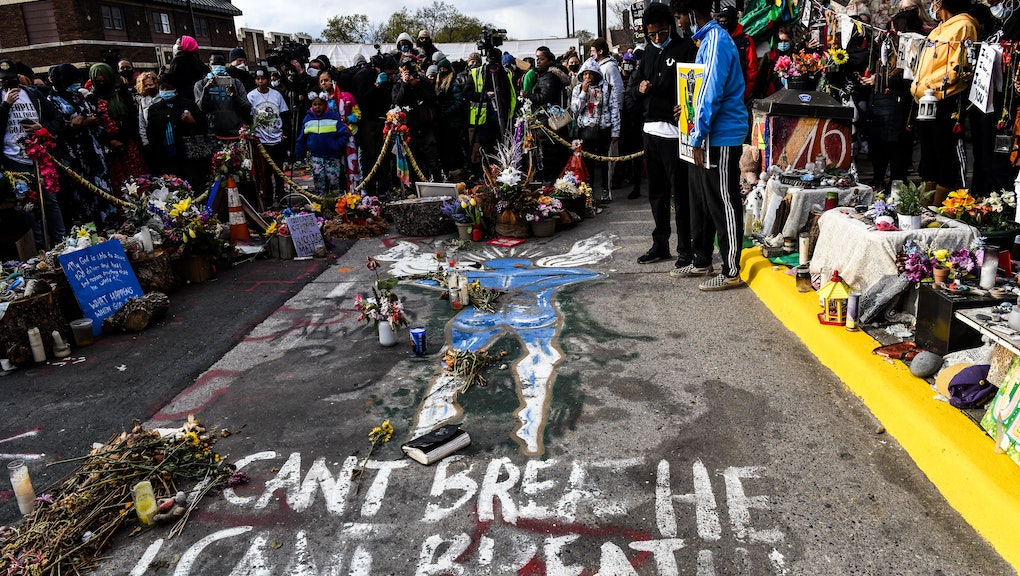 A love letter to Minnesota's grassroots

Before Tuesday, I would have started this essay by clumsily referring to the "police killing" of George Floyd. I would have dodged what we all know because legal constraints censor me, too. I would have been required to offer a presumption of innocence through wordplay despite video showing Derek Chauvin kneeling on Floyd's neck until he died, because a murder is only a murder if a conviction says so.

Today, however, I can say former Minneapolis police officer Derek Chauvin murdered George Floyd. If you want to get technical, jurors found Chauvin guilty of second-degree unintentional murder, third-degree murder, and second-degree manslaughter. These classifications don't necessarily matter to me, outside of acknowledging them so nobody can say I haven't done my due diligence as a journalist. Second- or third-degree, either way, I can finally call Derek Chauvin a murderer.

Some people are celebrating this verdict, but I can't. My feelings about it are admittedly complicated; I've written about why Chauvin's trial, and thus this verdict, are incapable of delivering real justice. Time and time again, I've had to be the voice on the sidelines, reminding people that the same state funding the police to horrifically oppress Black communities is incapable of providing mechanisms for our freedom.

In a sense, I'm here to take up that position of reorienting the conversation again. But this time, I do get to celebrate something. While I may not rejoice over the verdict itself, I can see it for what it is. Throughout Chauvin's trial, the city of Minneapolis prepared for the coming verdict by once again militarizing the streets, barricading doors and windows, and surrounding the perimeter of the Government Center downtown with barbed wire. Even outside of Minnesota, cities like Philadelphia, where I live now, responded to the news of an incoming verdict by activating the National Guard and lining areas of downtown and West Philadelphia with hordes of police.

To be clear, I'm not happy about the militarized response. But like the verdict, I'm reading beyond what the state wants. I see the law enforcement preparation and the verdict stemming from the same source. Chauvin was not brought to trial and charged because the state found a conscience. He was brought to trial because officials were afraid of how much more destruction could come to their city if they treated him the way they did Mark Ringgenberg and Dustin Schwarze, who were not indicted for the police killing of Jamar Clark in 2015, or Dan May, who received a Medal of Valor after shooting 17-year-old Tycel Nelson in the back in 1990.

This fear did not come about because of massive organizations or nonprofits. No, this verdict is a desperate attempt to appease the masses — the people whose names you may never know, but who breathed in weeks' worth of chemical irritants like tear gas and pepper spray, or spent late nights spreading messages on social media, participating however they could, because a brush with celebrity was not their drive.

Being from Minneapolis means that my feelings about the city are as complicated as my feelings surrounding Chauvin's verdict. I know every part of myself that is owed to that city, including the parts I could do without. There were times in Minneapolis when I hated it so damn much that walking outside of my door made my skin crawl. Eventually, I hated it enough to move halfway across the country to Philadelphia with no housing lined up. But now, I can't get through a conversation here without bringing Minneapolis up somehow.

Even when I lived in and hated Minneapolis, I loved it for what I knew it could be. And I only knew what it could be because of the people there. The friends who protested with me but also laughed and gossiped and spent nights hopping from party to party, living our momentarily best lives in a city that was otherwise intent on destroying them. The elders who showed me where our blood flowed before and what bloomed in its path after. The youth who were not afraid to ask questions and flip tables if they didn't like the answers. Regardless of how I felt about Minneapolis as a whole, there were always those small parts of it that breathed, moved, and dreamed differently.

So following Floyd's murder, I wasn't part of the country surprised that Minnesota, of all places, would pop off the way it did. The looting? The Third Precinct burning? The people ready and willing to face off against lines of police and Minnesota National Guard who could seriously maim, if not kill, them? All I can say is mashallah. Those are the people we owe this verdict to.

Some names behind this revolution we know, like Darnella Frazier, who captured Floyd's murder on her cell phone when she was only 17 years old. Some people we know by their positions as street medics, and yes, there are small collectives, organizations, and cooperatives like Minnesota Teen Activists, which coordinated a statewide walkout this week, or Black Table Arts, who deserve credit for their roles, too. And yet, there are just as many of the unaffiliated; friends who grouped up to do what had to be done but who never needed a formal name or hierarchy in order to define it.

Now, though, I can't help but think of how so many people wanted to discount their actions because they were not pretty enough. Who ever told you that a revolution would be easy on the eyes? In December of 1963, Malcolm X gave a speech titled "Message to the Grassroots" at a rally in Detroit, Michigan. There, he spoke about what makes a revolution, and I find his words especially fitting in a time where "peaceful" protests are somehow the only legitimate ones:

"A revolution is bloody. Revolution is hostile. Revolution knows no compromise. Revolution overturns and destroys everything that gets in its way. And you, sitting around here like a knot on the wall, saying, 'I’m going to love these folks no matter how much they hate me.' No, you need a revolution."

I don't have a message to the grassroots of Minneapolis because I think they, better than most, understand Malcolm's speech. Instead, this essay is my love letter to the grassroots, and to all the people who embody what Malcolm said next: "Whoever heard of a revolution where they lock arms, as Rev. Cleage was pointing out beautifully, singing 'We Shall Overcome'? Just tell me. You don’t do that in a revolution. You don’t do any singing; you’re too busy swinging."

More like this
Brain scans revealed how racism weighs on Black women's health
By Sierra Carter
100 years after the country's largest labor war, its dark legacy still looms
By Kim Kelly
An anti-vaxxer decided to come to work in blackface, comparing her "plight" to that of Rosa Parks
By Melissa Pandika
Stay up to date