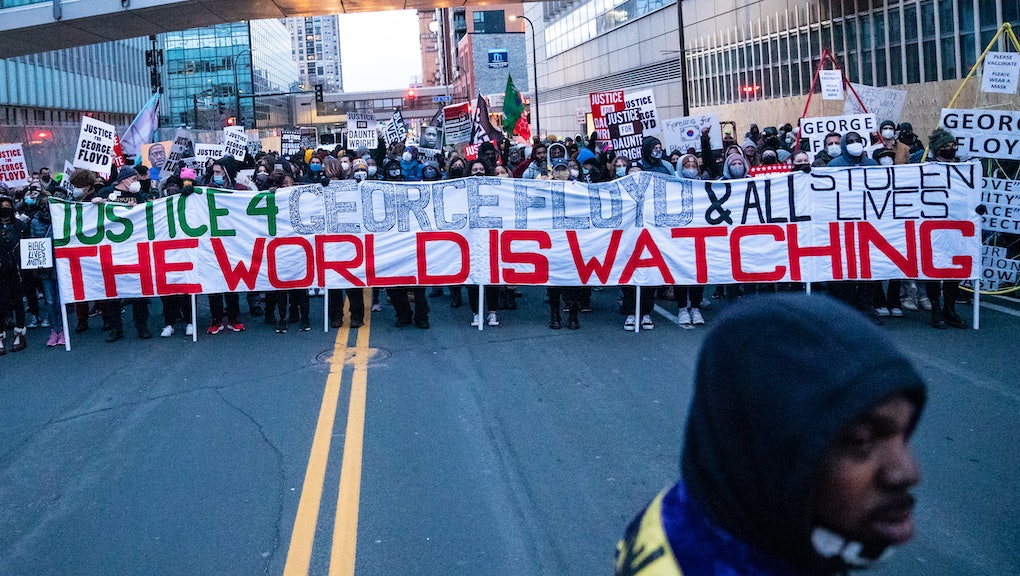 Derek Chauvin has been convicted in the murder of George Floyd

On Tuesday afternoon, a Minneapolis jury convicted former city police officer Derek Chauvin of the murder of George Floyd. Chauvin was convicted on all three charges he faced — second-degree murder, third-degree murder, and second-degree manslaughter — stemming from the May 25, 2020, arrest of Floyd for allegedly trying to pass a counterfeit $20 bill. During the course of Floyd's arrest, Chauvin knelt on Floyd's neck while Floyd was facedown on the street for over nine minutes, continuing to restrain Floyd well after he'd stopped responding.

Chauvin, who was in the courthouse while the verdicts were read, will be sentenced in eight weeks, per trial judge Peter Cahill. The second-degree murder charge carries the highest possible sentence — up to 40 years in prison — while the third-degree murder charge carried up to 25 years and the manslaughter charge carried up to four years for a defendant like Chauvin with no prior criminal history. Chauvin's bail was revoked and he will be remanded to state custody until sentencing. The prosecution will also have the opportunity to present a case for a longer sentence for Chauvin because of aggravating factors in the case, such as the facts that Floyd was handcuffed facedown on the pavement while he was killed and that he cried out repeatedly that he could not breathe before he fell unconscious.

Closing arguments were presented Monday, after which the jury was sequestered for deliberation. The news that a verdict had been reached came Tuesday afternoon after just 11 hours of deliberation, bringing the trial to a quicker resolution than had been anticipated. The prosecution had argued that Chauvin killed Floyd by using "excessive and unreasonable force" when he kneeled on his neck, arguing that Chauvin's restraint was not a legitimate law enforcement maneuver. Minneapolis Police Chief Medaria Arradondo notably took the stand for the prosecution, telling the jury that Chauvin's neck restraint was not a tactic taught by the department and in fact "violates" the department's policy for de-escalation and use of force.

Arradondo's appearance on the stand was a clear furtherance of the prosecution's overall strategy of painting Chauvin as a "bad apple" cop, rather than leaning into activists' call that policing is beyond reform. Floyd's killing last year kicked off a summer of racial justice protests that included nationwide calls to "defund the police" — if not abolish the institution altogether. In anticipation of the verdict, the Minnesota National Guard has been on hand in Minneapolis. Illinois Gov. J.B. Pritzker (D) also deployed his state's National Guard on Tuesday.

The defense, meanwhile, attempted to portray Floyd's death as the result of a legitimate police tactic that was lethal only because of Floyd's past drug use. Chauvin's team argued that Floyd went into cardiac arrest and died because of drug use and existing heart problems, though the Hennepin County medical examiner ruled Floyd's death a homicide due to "cardiopulmonary arrest complicating law enforcement subdual, restraint, and neck compression." Perhaps most crucially, a pulmonary expert testifying for the prosecution said that "a healthy person subjected to what Mr. Floyd was subjected to would have died," directly contradicting the defense's argument that it wasn't Chauvin who killed Floyd but rather Floyd's own body and actions.

Politicians had become a point of contention in the last days of the trial. California Rep. Maxine Waters (D) said over the weekend that protesters might "get more confrontational" if Chauvin was convicted, which led Cahill to tell the defense that Waters's comments could be grounds for an appeal because they came before the jury had been sequestered. President Biden, meanwhile, said Tuesday morning that he felt the evidence was "overwhelming" and that he was hoping for the "right verdict," adding, "I wouldn't say that unless the jury was sequestered."

J. Alexander Kueng, Tou Thao, and Thomas Lane, the three other Minneapolis police officers who were also present while Chauvin killed Floyd, will be tried together this summer. Each of them had varying degrees of involvement in Floyd's death: Lane and Kueng were also physically restraining Floyd, but on his lower body, while Thao was standing guard against the gathered crowd.

Despite Chauvin's conviction, the push for overhauling institutionalized policing in America lives on. As Mic's Vanessa Taylor wrote last week: "The state as it is cannot function if it acknowledges Black people as people, who are worthy of life and love. It has no mechanisms to support our liberation. We, however, do."

More like this
A mother and daughter have been charged with murder after performing a back alley butt lift
By Melissa Pandika
Biden's new office to fight for environmental justice already faces an uphill battle
By AJ Dellinger
An anti-vaxxer decided to come to work in blackface, comparing her "plight" to that of Rosa Parks
By Melissa Pandika
Stay up to date