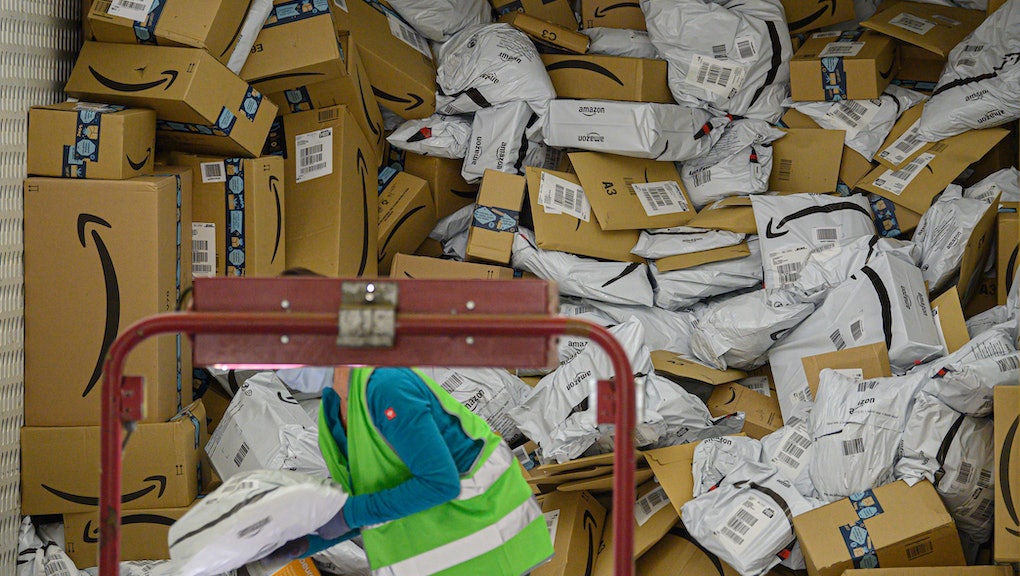 Our oceans are filling up with plastic. Between 4.8 and 12.7 million metric tons of the stuff enter the waterways each year, disrupting the ecosystem, littering beaches, and killing countless sea-dwelling creatures. A new report published by Oceana, an international ocean conservation advocacy organization, has found that Amazon is among the biggest contributors to this problem. The company's massive piles of plastic waste, generated by the billions of packages they ship every year, added tens of millions of pounds of plastic into freshwater and marine ecosystems last year.

Oceana's estimate is based on Amazon's own data indicating how many packages the company shipped over the course of 2019, combined with market intelligence reports regarding the amount of plastic packaging generated by e-commerce companies each year. Through this data, Oceana reported that Amazon delivered more than seven billion packages over the course of 2019 and generated 465 million pounds of plastic packaging waste along the way. According to the report, just the air pillows that Amazon uses to fill its packages could circle the Earth more than 500 times.

Using a recently published study that estimates the amount of plastic waste that finds its way to oceans and waterways, Oceana concluded that Amazon's use of air pillows, bubble wrap, plastic bags, and other plastic-based packaging material is contributing 22.44 million pounds of waste into our waterways each year. Per Oceana, that would be the equivalent of dumping a full delivery van of plastic into the oceans every 70 minutes.

The findings are particularly troubling given that it is expected the amount of online shopping, particularly through Amazon, increased this year due to the coronavirus pandemic. Without taking the proper steps to account for this volume, the amount of plastic waste is also likely on the rise. This is particularly disturbing in light of a recent study published in the journal Science warned that the amount of plastic trash being generated is significantly exceeding efforts to mitigate and recycle it. Other reports have highlighted that plastic waste in the ocean is actually worse than we ever imagined, and packaging plastic is among the worst and most deadly for marine life.

Amazon unquestionably produces plenty of plastic waste, but the company denies producing nearly the amount that Oceana estimates it is responsible for. “We share Oceana’s ambition to protect and restore the world’s oceans, and we support the reduced use of plastics," a spokesperson for Amazon tells Mic. "However, Oceana has dramatically miscalculated Amazon’s use of plastic and exaggerated it by over 350 percent." According to Amazon, it uses "about a quarter of the plastic packaging estimated by Oceana’s report." The company claims that it has "reduced the weight of outbound packaging by more than a third, and eliminated almost one million tons of packaging material."

Oceana acknowledged within its report that much of Amazon's packaging is lightweight and that the company has created some plastic-free shipping solutions, but notes that some of the weight reduction achieved by Amazon is the result of relying on lightweight plastics that do not biodegrade. Oceana found that this plastic is still widely used in many of Amazon's packages. Oceana also notes the company has not given customers the option to choose plastic-free packaging despite a considerable amount of demand for such an option.

Amazon has been positioning itself as an increasingly eco-conscious company, working to redesign its packaging to reduce waste and minimize its carbon footprint. Company founder and CEO Jeff Bezos has made climate change a top priority of his philanthropic efforts, pledging $10 billion to address the pressing problem. Perhaps that money could be better spent reducing Amazon's plastic waste problem rather than, say, naming a hockey stadium Climate Pledge Arena.