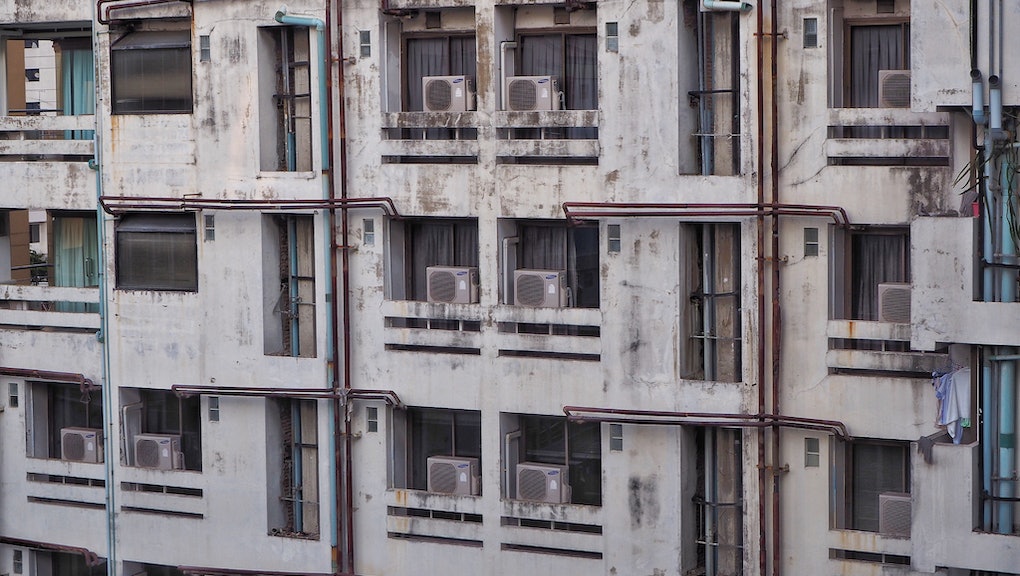 It’s hot out there, folks. The East Coast is in the middle of a sweltering heatwave that has pushed thermometers into the triple digits, and a second wave is building on the West Coast. That means air conditioning units across the country are working overtime. The problem is that while air conditioning makes the indoors feel like a brisk fall day year-round, it also makes the outside even hotter. A new report from the United Nations Environment Programme and International Energy Agency (IEA) paints a picture of just how much hotter, and suggests that making air conditioning more energy efficient is essential to preserving the environment.

There are currently more than 3.6 billion cooling appliances in use around the world, including refrigerators, freezers, and air conditioning units. These tools are essential not just for convenience but for survival. In the United States, heatstroke has been the leading cause of weather-related death for the last 30 years. As the planet continues to get hotter, and faster than expected, air conditioners and other cooling technologies will only become more important. According to the US Department of Energy, about six percent of all electricity consumption in the country is the result of running air conditioners, costing homeowners about $29 billion per year and releasing nearly 117 million metric tons of carbon dioxide into the atmosphere annually.

That's before accounting for the fact that many major metropolitan areas across the west coast go without air conditioning. The average summer temperature in San Francisco is about 67 degrees, even in the dog days of August. But a few years back when the city experienced a devastating heatwave that pushed temperatures above 100 degrees, millions of people were left scrambling to find ways to stay cool. A similar fate could strike a city like Seattle, the least air-conditioned metro area in the entire country. As temperatures continue to climb, these areas are likely to adopt air conditioning in order to adjust to the new normal of abnormal heat.

Gabriel Dreyfuss, the senior scientist at the Institute for Governance and Sustainable Development and chief scientific advisor officer for the Kigali Cooling Efficiency Program, as well as one of the lead authors on the UN's report, tells Mic that many regions are seeing new growth when it comes to cooling technology. "We're seeing in India, for example, that less than 10 percent of urban households have air conditioning right now. We're seeing similar growth rates over 10 percent a year across Africa and Southeast Asia." The problem with bringing that many units online over the course of the next three decades is the fact that it would produce a potentially insurmountable amount of carbon emissions if the air conditioning units aren't efficient and energy-friendly.

"If we miss this opportunity and install a bunch of inefficient old equipment, if we do it wrong, we cook ourselves." - Gabriel Dreyfuss

The issue with air conditioners is two-fold. First, they rely on greenhouse gases to keep us cool. Many of today's air conditioners use hydrofluorocarbon (HFCs) to produce the cooling effect. These replaced Hydrochlorofluorocarbons (HCFCs), which were found to be depleting the planet's ozone and banned by the EPA in 2010, and may have been responsible for as much as one-third of the rise in temperature on Earth between 1955 and 2005. While HFCs aren't as destructive to the ozone, Dreyfus explains that they are still "very strong greenhouse gases" that contribute to climate change.

The second major issue with air conditioners is that they require a considerable amount of electricity to run them, and most are inefficient users of that power. According to Dreyfuss, most air conditioners being bought today are two to three times less efficient than the best available technology. She describes these units as "energy vampires."

This is where the UN's Kigali amendment comes into play. First ratified in 2016 and put into effect in 2019, the Kigali amendment calls for a significant phase-down of HFCs, cutting as much as 80 percent of global HFC consumption by 2047. According to the UN report, this amendment could save the planet about 460 billion tons of greenhouse gas emissions over the next 40 years. That's about eight times the emissions that the entire world produced in 2018 alone. It could also result in staving off as much as a 0.4-degree increase in global temperature.

The amendment essentially pushes companies into producing more efficient and less polluting cooling products, which haven't been as widely available before. Dreyfuss says it also presents the perfect opportunity for companies to make their products more energy-efficient, seeing as they have to redesign them anyway. "During that redesign, they can also incorporate some of the technologies that also can significantly enhance the energy efficiency," she says. She says that there needs to be consumer demand to show companies that energy-efficient cooling solutions is something that people want, but also notes that "You can't buy what isn't made." Essentially, if companies build a more efficient AC unit, it will give people the opportunity to adopt smarter and better technologies.

Air conditioning and cooling presents a potentially challenging needle to thread as we head into a warmer future, which is why Dreyfuss and her colleagues are pushing so hard for more efficient technology be placed at the forefront now. More people around the world are getting access to air conditioning, and the technology is more needed than ever in regions that haven’t traditionally been. "If we miss this opportunity and install a bunch of inefficient old equipment, if we do it wrong, we cook ourselves," Dreyfuss says. She notes that when you account for existing home and office cooling, refrigerators and commercial refrigeration, and include the growing demand for these products — "we could be selling as many as 10 per second," she says — we are creating a lot of greenhouse emissions. "Between the refrigerants and the emissions associated with the electricity generation, we could use up most if not all of the remaining carbon budget for staying under 1.5 C in the sector alone," she warns.

How to stay cool without ruining the planet

The best way to avoid contributing to greenhouse gases is by adopting energy-efficient technologies. In the US, this is relatively easy, thanks to the Energy Star program. Energy Star is a joint effort between the US Environmental Protection Agency and the Department of Energy that promotes energy efficiency. You can also use the Energy Star website to look up different products and brands to see how they fare when it comes to energy efficiency.

But for many consumers, buying a new and efficient air conditioner might not be feasible. For renters, for instance, an air conditioning unit may be provided and there is little control over how efficient and effective that is. Luckily, there are steps you can take to make the most out of these existing units that may not be up to snuff.

Dreyfuss recommends a default temperature of about 75 degrees for your air conditioning unit, and she suggests looking at some of your own habits to determine what you can change to rely on air conditioning less. "Think about things like, should you be wearing a sweater inside during summer," she suggests. These little behaviors can allow you to ease up on your reliance on cooling.

Other small tricks include keeping your blinds closed during the day to prevent sunlight from coming in, which can quickly heat up a room and send your air conditioner into overdrive to address the heat. Similarly, even your lightbulbs can generate heat if you are using inefficient options. Stock up on low-energy light bulbs to give your AC unit a bit of a break. Also, make sure to keep filters clean to allow the air conditioner to run as it is supposed to. Every little bit helps in maintaining efficiency.