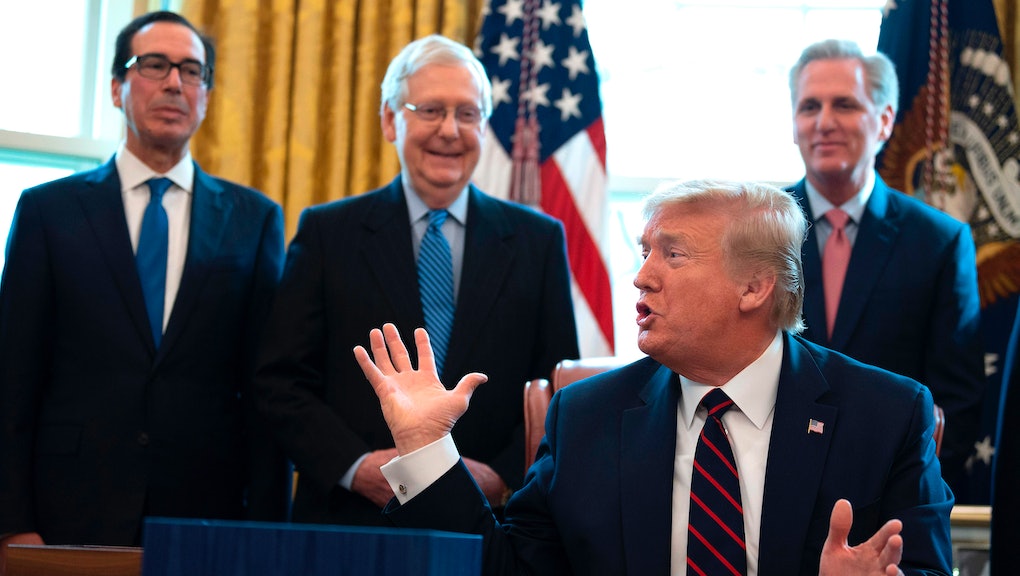 A second coronavirus stimulus check? Here's everything you need to know

Despite what President Trump would like to believe, we are still in the first wave of the coronavirus outbreak in the United States. The pandemic has wreaked havoc on jobs, income, and individuals' abilities to weather financial strain. Congress passed the $2 trillion CARES Act in late March in response, which sent checks of up to $1200 to individual Americans who met certain income requirements, in addition to providing other forms of financial relief. But given that the sum barely met the average cost of rent in the U.S. — in addition to the fact that a one-time cash infusion received in April does little for someone struggling now, in mid-July — activists are pushing now for a second coronavirus stimulus check.

The calls for financial relief, including from some lawmakers on Capitol Hill, specifically say that the amount given must meet the realistic financial needs of those who are struggling right now. The funds would be distributed as part of the HEROES Act, another coronavirus relief bill that has already passed the Democrat-controlled House but has stalled in the Senate, where there's a Republican majority. Here's what you should know about the possible second round of cash.

Will Congress pass another stimulus package?

If members of Congress can actually agree on what another stimulus package will look like, President Trump will almost certainly sign it into law. He's pledged on a number of occasions that there will be follow-up legislation to the CARES Act, spurred likely in part by his plummeting approval ratings and impending — and increasingly tough-looking — re-election battle.

Senate Majority Leader Mitch McConnell has also pledged that there will be another stimulus package, acknowledging that low-income Americans have been hit particularly hard by coronavirus. Though he's open to another round of checks, McConnell seems reticent to replicate the blueprint of the first relief package, and he's refused to bring the HEROES Act to the Senate floor. McConnell has also said that the next stimulus package will cost about $1 trillion — roughly half of what the CARES Act cost.

Leaders in the Democratic Party, like House Speaker Nancy Pelosi, disagree with the $1 trillion cap. Pelosi said outright that the sum won't be "enough," though she did acknowledge that some concessions will need to be made to get the bill past congressional Republicans. "We will have to find common ground to pass legislation," Pelosi said.

Who will qualify for a payment?

In March, lawmakers decided that recipients would be split into two categories: individuals and families. This will likely remain the same in this next round. But Congress has yet to announce any income thresholds for the second payment. McConnell has stated that the income ceiling for payments should be $40,000 — a significant drop from the $75,000 income threshold for individuals to receive a check under the CARES Act, and one that would potentially leave out tens of millions of Americans who are in need of assistance. It's unclear now whether McConnell will be successful in lowering the threshold, though; we'll likely have to wait a few weeks to see.

It's also likely that the government will once again leave out some individuals altogether: namely, undocumented people, who were left out of the CARES Act, alongside young adults claimed as dependents by their parents on their most recent tax filings. American citizens married to undocumented immigrants who filed their taxes jointly with their spouses were also denied stimulus checks.

The second round of payments is an opportunity for Congress to address these shortcomings. Undocumented people pay into the social safety net, experts argue, and thus deserve to benefit from government aid just like everyone else. Advocates also note that the government already provides direct cash transfers to Americans through programs like Social Security, so doing so to alleviate the effects of a once-in-a-generation health crisis should not be a problem.

Meanwhile, while scores of people who contribute to the American economy did not receive aid, the Trump administration did disburse checks to hundreds of thousands of dead people.

How much will my check be for?

With the CARES Act, legislators decided to start the payments at $1,200 for individuals based on their most recent tax return, with a max of $2,400 for families. In May, House Democrats proposed the HEROES Act, their follow-up to the CARES Act, which also starts payments for individuals without dependents at $1,200. But the HEROES Act goes further than the CARES Act in that it includes payments of up to $6,000 for families. If you're curious, you can calculate your potential payment under House Democrats' proposal here.

In the Senate, the exact amounts will likely turn into a fight. Sen. Bernie Sanders (I-Vt.), for example, says that the minimum amount provided needs to be $2,000, while Republicans signaled after the HEROES Act passed the House in May that the amount was already too much. In the coming weeks, lawmakers might have to compromise on a trade-off, whether it's larger checks for a smaller number of Americans, or vise versa, so as to meet the spending concerns of Republicans who have a majority in the Senate.

Other members of the Senate believe direct payments to individuals is already a misguided venture. South Carolina Republican Tim Scott, for example, has argued for "sector-targeted relief" as a more effective way of bolstering the economy. Scott said that he believes too-large payments to Americans run the risk of disincentivizing returning to work — an argument that made the rounds among Republicans during CARES Act deliberations, too.

Whatever the amount, experts say that relief checks are beneficial for the economy because they help people stay on top of their debts, and also keep people in their homes during a time when social distancing is still crucial. Jerome Powell, the chairman of the Federal Reserve, testified before a congressional committee in late June to the importance of the CARES Act. "This direct support can make a critical difference not just in helping families and businesses in a time of need, but also in limiting long-lasting damage to our economy," Powell said.

When would the check arrive?

The Senate is on recess now, and lawmakers will return to Washington, D.C., on July 30. Members of the upper chamber will have until Aug. 7 to draft, discuss, and vote on potential legislation if they want to get something done before the August month-long recess. Members of the House are continuing to work until July 31, when they too will head home for a few weeks. So there's a brief window of time for lawmakers to act if they'd like to get something done before the fall.

Based on when the president signed the CARES Act into law and the first checks started going out, it might take at least two weeks from when a bill is passed to when Americans see the funds hit their bank accounts. And even still, it should be noted that while the CARES Act passed in late March, the House Committee on Ways and Means reported that millions have yet to receive their federal funds.