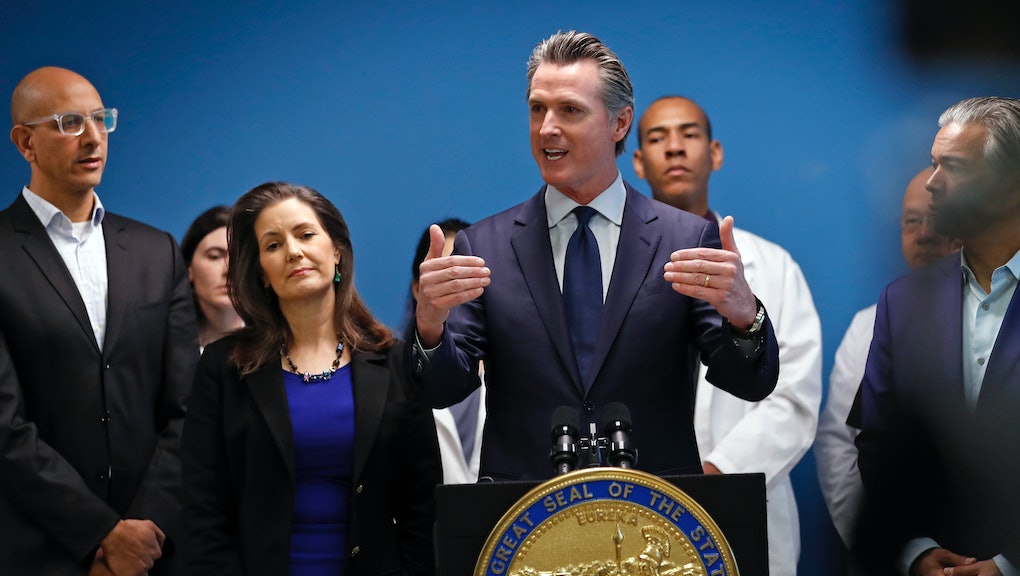 The coronavirus pandemic's economic impacts are hitting low-income Americans hard. Nearly half of low-income households lost a job due to the ongoing pandemic. Many have relied upon disaster relief and unemployment benefits to cover basic necessities, but what about those who don't qualify for either? On Monday, California launched a program offering $500 cash assistance to undocumented immigrants who are unable to receive other forms of government assistance.

Under the original $2 trillion CARES Act stimulus package, the Trump administration blocked undocumented immigrants and their spouses from receiving coronavirus aid. But last month, California Gov. Gavin Newsom (D) announced the state would fund a $75 million Disaster Relief Assistance program. Through it, undocumented immigrants who are ineligible for unemployment benefits or disaster relief can receive $500 per adult, with a cap of $1,000 per household.

While this is still significantly lower than what citizens received in aid — married couples could receive $2,400 plus an additional $500 for each child — California's program is stepping in where the federal government has otherwise abandoned undocumented people.

The relief fund relies on private investment in addition to California's own contributions. “During this moment of national crisis, undocumented immigrants are risking their own health on behalf of the rest of us, saving lives as health care workers; caring for our loved ones; and growing much of the food we depend on,” Laurene Powell Jobs, the founder and president of the advocacy group Emerson Collective, which invested in California's program, said in a statement.

“With the federal government and so many states failing to provide undocumented immigrants the economic and health supports all Americans deserve, I hope that corporations, foundations, and individuals across the country will join us in providing the emergency relief these members of our community need to weather this challenging time," Powell added.

The program is expected to assist 150,000 people given its available funding, The New York Times reported, and is operating mostly via telephone. Twelve nonprofits are working with California to help distribute the aid, per the Los Angeles Times, in part to stem applicants' possible hesitations about contacting the government. After the program's first day, the Coalition for Humane Immigrant Rights, one of the nonprofits assisting with distribution in Los Angeles County, tweeted that the organization received over 1 million calls.

The PPIC also found that undocumented immigrants in California disproportionately work in agriculture, construction, and manufacturing — all industries hit hard by the coronavirus pandemic, and industries where some are still going to work despite the health risks. Last month, the Trump administration tried to lower wages for migrant farmworkers, even though they're deemed essential.

Last week, Democrats unveiled a new $3 trillion coronavirus aid plan which would allow undocumented immigrants to qualify for aid with their Taxpayer Identification Number. However, Republicans have pushed back against the legislation.

"Another round of checks for illegal immigrants. Can you believe it? We forgot to have the Treasury Department send money to people here illegally. My goodness, what an oversight. Thank goodness Democrats are on the case," Senate Majority Leader Mitch McConnell (R-Ky.) sneered in a speech on the Senate floor.

Meanwhile, the Center for American Liberty, a conservative group, is suing Newsom over California's program to give aid to undocumented residents. Because it is funded through taxpayer money, the group's attorney claims the state legislature should decide how it's distributed.

But for now, the program seems to be off to a strong start. "California is the most diverse state in the nation. Our diversity makes us stronger and more resilient. Every Californian, including our undocumented neighbors and friends, should know that California is here to support them during this crisis," Newsom said last month. "We are all in this together."

More like this
Guess how much Trump's companies made during his presidency!
By Rafi Schwartz
Should public transit be free?
By Andy Crump
So weird how Sean Hannity is super into the vaccine now
By Vanessa Taylor
Stay up to date