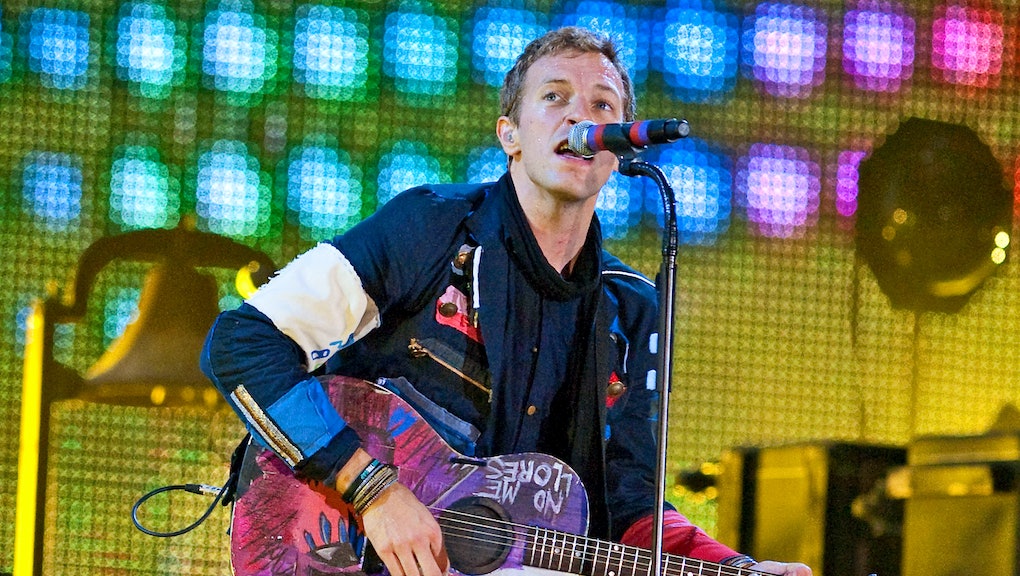 Acts like Coldplay, Billie Eilish, and The 1975 are leading the sustainable touring movement

Coldplay has a new album coming out on Friday, Everyday Life, but fans won’t be able to catch them in concert for a few years. "We're not touring this album. We're taking time over the next year or two, to work out how our tour can not only be sustainable [but] how can it be actively beneficial," frontman Chris Martin told the BBC.

Coldplay will mark the album drop by playing a pair of shows in Amman, Jordan, at sunrise and sunset on Friday. The concerts will be streamed free to a global audience on YouTube. The band will also stage a one-off concert at London’s Natural History Museum on November 25, with all proceeds benefiting ClientEarth, an environmental law nonprofit.

After that, Coldplay is putting the kibosh on live shows until they can figure out how to optimize touring for the planet. The frontman told the BBC his dream was to play a largely solar-powered show with no single-use plastic.

Festivals and stadium tours have a massive carbon footprint. Music industry experts estimate that live music generates 405,000 tons of greenhouse gas emissions every year in the UK alone. Remember that massive “claw” structure that U2 designed, so they could play gigs suspended in the middle of the crowd? A cavalcade of 120 trucks was required to take the thing on the road in 2009, and one environmental group estimated the band generated the equivalent carbon footprint of a flight to Mars during that tour alone.

The bulk of many musicians’ wealth these days comes from touring. Taylor Swift made $90.5 million playing shows in 2018, which accounts for more than 90% of her revenue that year — $99.6 million total.

When a band like Coldplay decides not to tour, they’re foregoing a massive payday. During their last outing, the “Head Full of Dreams Tour” in 2016 and 2017, Coldplay performed 122 shows to 5.4 million people across five continents. The tour employed 109 crew, 32 trucks, and nine bus drivers. It also made Coldplay more than half a billion dollars — $532 million, to be precise.

It is admirable of Coldplay to leverage its sustained popularity to set an example for the industry. Martin said he felt responsible to make sure his future tours "have a positive impact. All of us have to work out the best way of doing our job."

While Coldplay is arguably the biggest act to commit to going green, a number of other artists are advocating for sustainability in touring. Billie Eilish committed to making her world tour “as green as possible” by banning plastic straws, providing recycling facilities, and encouraging people to bring refillable water bottles — which normally aren’t allowed at venues. Every stop on the tour will feature the “Billie Eilish Eco-Village,” where fans can learn to be more sustainable in day-to-day life. Those who pledge to fight the climate crisis can win free tickets to sold-out shows through Global Citizen.

The 1975 pledged to plant a tree for every ticket sold to their shows, and they stopped manufacturing new band t-shirts, opting instead to screenprint a new design over leftover stock. A recent single featured climate activist Greta Thunberg, and proceeds from the track benefit Extinction Rebellion. The band’s label is also working to make its CD and vinyl manufacturing and packaging more sustainable.

The entertainment business is historically an industry of excess, but stadium concerts in particular have become massive spectacles. The thought of how much confetti is trashed by Madison Square Garden after an Ariana Grande concert would probably make Thunberg’s blood boil. That’s before you even factor in the electricity required to power the lights and sound and special effects. Or the many planes, trucks, buses, and cars that brought the musicians, the crew, and the audience to the venue that day.

Fortunately, it seems like the music industry is starting to scale back and think about sustainability. Emma Banks, co-founder of leading talent house Creative Artists Agency, told the BBC she’s encouraging clients to think a little smaller. “While I certainly don’t want to be putting anybody out of business, I think we have to start being realistic and going, ‘OK, let’s just dial it down a bit,’” she said.