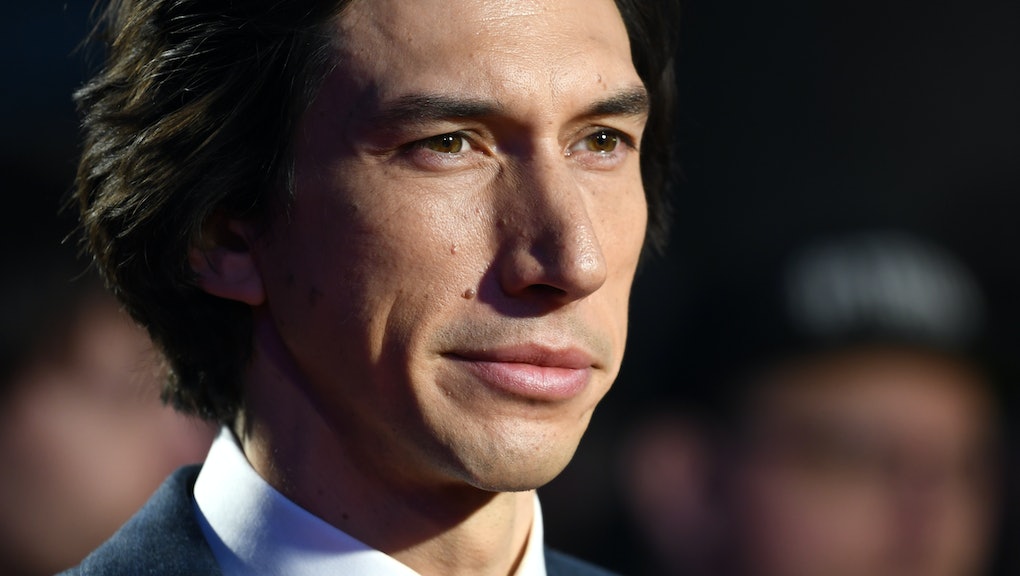 Adam Driver sat down with Fresh Air’s Terry Gross last week to talk about his trio of movies in theaters right now — The Report, Marriage Story and Star Wars: The Rise of Skywalker. But listeners of the long-running pop culture radio show will never get to hear his interview.

The actor walked out of the studio after Fresh Air cued up a clip of him in Marriage Story, reportedly the scene where he sings “Being Alive,” the closing number from Stephen Sondheim’s 1970 musical Company, which also concludes Noah Baumbach’s film.

The Daily Beast broke the news of Driver’s sudden departure from the interview. Fresh Air nearly always plays clips of a subject’s work as context throughout its episodes, but a source said Gross’ team was told in advance that the actor hates watching or listening to himself perform. Their fix? Producers encouraged Driver to remove his headphones during playback.

Alas, during a break in the interview, as Fresh Air played the “Being Alive” clip, Driver walked out and never came back. “We don’t really understand why he left,” the show’s executive producer, Danny Miller, told The Daily Beast. “We were looking forward to the interview — Terry thinks he’s a terrific actor, he was a great guest when he was on [Fresh Air] in 2015 — so we were disappointed that we didn’t have a new interview to share with our listeners about Marriage Story.”

After news of the fizzled interview broke, some were quick to shame Driver for what they perceived as a lack of professional stoicism. But a whole lot more came to the actor’s defense, pointing out that his talent has nothing to do with his performance anxiety.

“I don’t know if this makes sense to non-actor folk, but we really do experience incredible anxiety watching ourselves on film. Singing is even more personal. I completely get this,” actor Tim Nicolai tweeted in Driver’s defense. The post has been liked more than 16,000 times.

“Also, my understanding from everybody in the NYC theater and film community is that Driver is an incredibly shy, very sweet dude who usually navigates this stuff just fine. He’s not temperamental or rude in the least,” Nicolai added in a follow-up tweet.

Driver’s aversion to watching or hearing his work is well-documented. A recent New Yorker profile noted his reluctance to watch himself “amounts to a phobia.” When he was obligated to sit through a screening of Star Wars: The Force Awakens in 2015, he told The New Yorker, “I just went totally cold, [...] and I felt like I had to puke.” After that, Driver swore off watching himself act. He confessed he actually hid out in the greenroom during the premiere of BlacKkKlansman at Cannes, sneakily returning before the final bow.

Terry Gross personally questioned Driver about his performance anxiety more than four years ago. The actor was a guest on Fresh Air in 2015 and declined to listen to himself at one point. “I don’t want to hear the bad acting that probably was happening during that clip,” he joked in explanation.

“Does it throw you off to hear yourself?” Gross asked.

“Yeah, no, I’ve watched myself or listened to myself before, then always hate it,” Driver responded. “And then wish I could change it, but you can’t. And I think I have, like, a tendency to try to make things better or drive myself and the other people around me crazy with the things I wanted to change or I wish I could change.”

Plenty of other celebrities hate watching their own work. Emma Stone never saw her breakout film, Easy A. “Who wants to watch themselves for that long?” she replied when Variety pressed her on it. Meryl Streep reportedly watches each of her films once, then never again.

Javier Bardem, one of the greatest actors in the world, sounds a lot like Driver when he talks about watching himself onscreen: “The fact that I like to make characters doesn’t mean that I like to watch my characters being made, my performance,” he told GQ. “I can’t even watch that f—ing nose, that f—ing voice, those ridiculous eyes. I can’t handle that.”

At the end of the day, the only person who should really care that Driver walked out on Fresh Air is its host. This incident sounds like it was a bummer for everyone involved. If Gross insisted on sticking to her usual format, playing clips of Driver’s work interspersed with their interview, why didn’t someone suggest adding those snippets in post?

Nobody else was in Driver’s head the moment he decided to leave the interview. He could’ve suffered a full-blown anxiety attack, which would be plenty understandable for someone working the press circuit for three different major films and trying to retain a shred of sanity. Driver’s exit may have offended some, but it was an act of self-care, and the public needs to respect that.

More like this
After shutting up for a minute, celebrities want everyone to listen to them again
By Brandon Yu
Steve from 'Blue's Clues' gave us the closure we didn't know we needed
By Kara Weisenstein
Lil Nas X’s ‘Montero’ is a vulnerable guidebook on self-acceptance
By Brandon Yu
Stay up to date