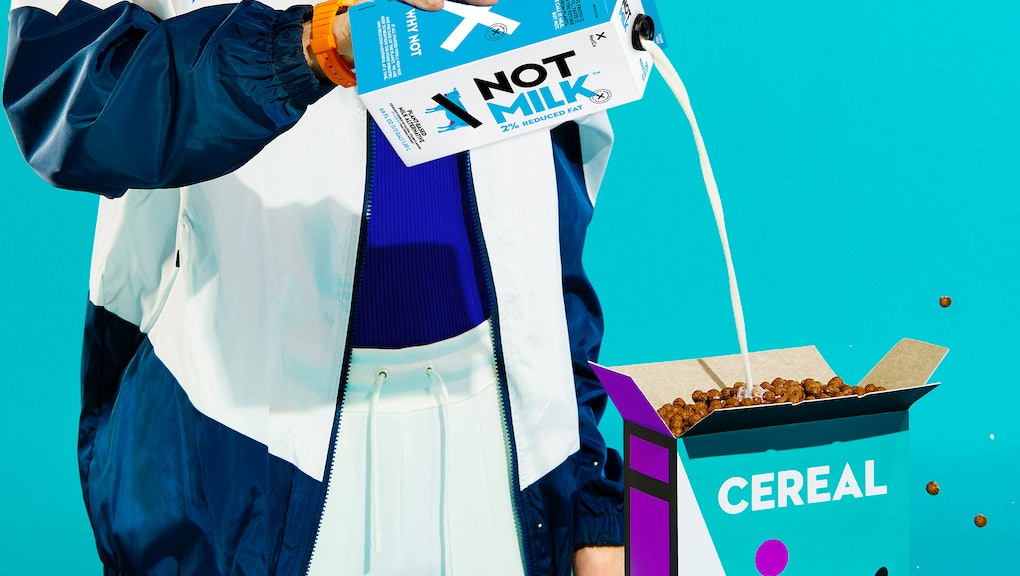 The future is officially here. While my robot vacuum cleans my house, I can safely visit my favorite coffee shop — without an N95 mask — and order a vegan latte with my choice of non-dairy milks. I never care which vegan milk is offered because, honestly, none of them actually taste like milk. Except that now they’re starting to. There’s a new AI-created vegan milk that promises to be much milkier, somehow, than any of its predecessors.

This new alt milk is called NotMilk, and it was created by Chilean start-up NotCo. I know, I know; we’ve seen an absolute glut in the market of milk substitutes in the past few years, but this one really seems to be different. All of the current offerings are sort of single note, as it were, and generally have a legume or bean base, like soy or cashew. This new NotMilk, however, is primarily made of pea protein, but has a whopping 18 ingredients, the most noteworthy of which are cabbage and pineapple. Yes, cabbages. Yes, pineapples.

But does simply having more — or more bizarre — ingredients somehow make this faux milk better? The short answer is, maybe. Traditional plant-based milks are generally, well, pretty traditional in how they’re made. To make almond milk, for example, you grind soaked almonds with water and then squeeze out the liquid which — voila — you can call milk. NotMilk, on the other hand, was developed by an AI algorithm that used technology to analyze and then mimic the structure of milk as closely as possible down to a molecular level, reported the Washington Post.

The algorithm that created NotMilk is cutely called Giuseppe after Giuseppe Arcimboldo, a 16th century Italian painter who famously made portraits where the humans were made of fruits and vegetables. Basically, everything about this new vegan milk — besides the fact that its development is partially backed by Amazon Kingpin Jeff Bezos — is precious, from its AI creator down to its flavor, which some say tastes like milk that’s been soaked in cereal and reviewers seem to love. Plus, it allegedly froths. I am not personally a fan of foam, but vegancinno lovers around the world can now rejoice and join in the world of elaborately decorated coffee.

NotMilk was intended to imitate the taste and mouthfeel of cow milk as closely as possible, without recreating the ridiculous carbon footprint of the dairy industry and — most importantly, to me — without harming any animals. Look, for the sake of cows, I honestly would just keep drinking the paltry fake milks that are currently available, but I am frankly delighted that something even milkier is on the horizon.

More like this
If we get vegan bacon right, we can save humanity
By Tracey Anne Duncan
Could "chickenflation" tilt America toward a more plant-based diet?
By Tracey Anne Duncan
This white woman called herself the Queen of Congee for “improving” a 3,000-year-old Asian staple
By Joseph Lamour
Stay up to date