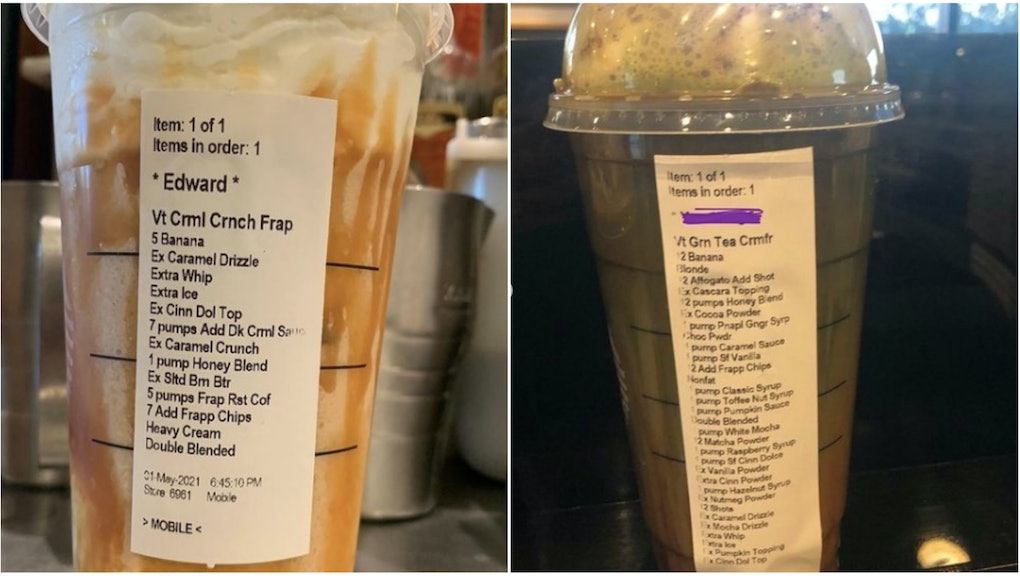 TikTok is increasingly the place where viral trends begin. Recently, TikTok creatives have been posting about how to get “super secret” off-menu items from Starbucks. Sure, it sounds cool and exclusive, but baristas say these viral TikTok coffee trends are making them feel like robots. Here are the deets the complicated TikTok order trends that are costing baristas their sanity — and sometimes their jobs.

Earlier this month, Josie Morales, a Starbucks barista in Los Angeles, was fired after he tweeted a picture of an excessively complex order placed by a customer named Edward, according to Business Insider. The caption of Morales’s — now deleted — tweet read, “On today’s episode of why I want to quit my job,” and featured a snapshot of Edward’s order, which was a Frappacino that included 13 special requests and double-blending. Other Starbucks baristas joined in the fun by tweeting their most ridiculous orders, some that included up to 37 off-menu additions inspired by TikTok.

If exceedingly personalized coffee sounds cute and creative to you, you have probably never worked in the service industry. Sure, it might be fun to get a special order if you were, say, paid a reasonable wage and didn’t have a line of impatient customers waiting, but that’s not how it works at Starbucks. The worst part is that the company apparently knows that these absurdly complex orders are trending — they seem to be cool with this trend to continue driving business. Starbucks certainly doesn't want anything to slow down lines, though, and that means that baristas have to do a lot more work in less time.

"Custom drinks from social media like TikTok are also increasing the need for labor," a Starbucks supervisor in Pennsylvania told Insider in May. "These drinks are getting more and more complicated while the company is pushing for drive-thru times under 40-50 seconds." According to Insider, the company doesn’t currently place any limit on the number of customizations someone ordering a $5 drink can request as long as it’s a drive through or delivery order, but they also don’t seem willing to give employees any extra time to fulfill those orders. The result is that baristas are forced to work like robots to fill the ridiculous TikTok-inspired requests of the Edwards and the Karens of America.

TikTok gets a lot of credit for trending “wokeness.” And yes, some of the trends that have started there — like the Buss It Challenge — are laudable for how they lift up marginalized folks, but some of them — like this one — are seriously problematic. From where I sit, any social media trend that forces already underpaid and underappreciated workers to do more work in less time isn’t just absurd, it also actively encourages corporations to dehumanize their workers.

More like this
The benefits of liquid chlorophyll, explained
By Melissa Pandika
The fast food industry's predatory marketing blatantly targets Black and Latinx youth
By Taneasha White
AI created the "ideal" non-dairy milk and the ingredients are pretty bizarre
By Tracey Anne Duncan
Stay up to date