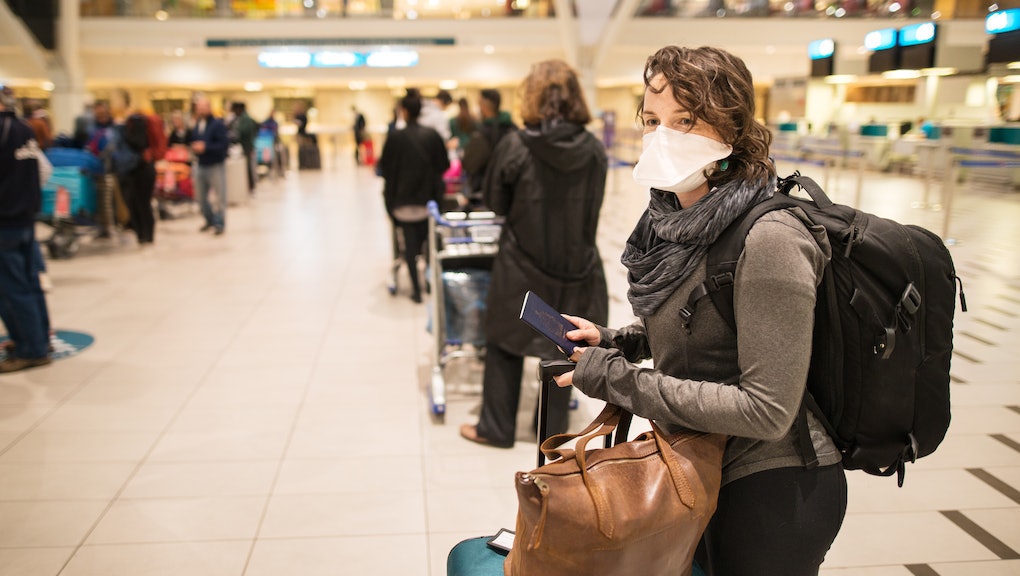 Air travel is up 400%, but is it actually safe to fly again?

Any other summer, you can find this habitual homebody crawling out of his lair to travel downtown in search of shopping, museums, and outdoor eating. Now, the idea of even stepping onto a subway car fills me with trepidation, with COVID-19 still causing record infection rates in many states. But, people are a lot braver than I am, and as recent news suggests, are booking flights in record numbers. That’s right: People are strapped with masks, gloves and hand sanitizer, and they’re flying again.

On June 7, 2020, 430,414 people passed through an airport checkpoint in the U.S. according to the transportation security administration. It’s apparently the highest traveler number the TSA has reported since the pandemic hit the United States, and a 400% increase from the record low traffic day of 87,534 people on April 14.

If the idea of a 400% increase in travelers has you taken aback like me, chill because it's not actually that many people. Looking at it another way might help put it into perspective: Last year, on June 7, 2019, 2,644,981 people traveled through a TSA checkpoint, which means from year to year, airlines are still seeing a 505% decrease from before coronavirus impacted our lives and summer travel plans. So airplanes aren’t packed like usually are, thankfully. But people are definitely succumbing to cabin fever.

Airlines and vacation spots, in their own pandemic-era way, are ramping up for the travel season. Economies around the world slowly are opening up, and European countries, such as Greece, are welcoming tourism again. Although bookings for Greece, for example, are 49.8% of what they were in June 2019, as reported by the Post, that still is a lot of people travelling in spite of the still palpable risk.

Airlines seem to be ready to creep back toward normalcy as well. Last week, American Airlines announced plans to restore more of its flights as we enter the thick of summer, stating that they’re planning to fly more than 55% of its domestic capacity in July, and nearly 20% of the international schedule, according to a press release. Ironically, American Airlines is based in Fort Worth Texas, a state which is still seeing record numbers of coronavirus infections and hospitalizations.

On the other side of things, Delta appears to remain right now. The airline has decided to suspend service at 11 airports with low customer demand beginning July 8. “As the world responds to COVID-19. Delta continues to face an unprecedented impact to our business, and suspending operations at these airports will reduce costs where customer demand is low,” said Sandy Gordon, senior vice president of domestic airport operations, in a statement. Although the Post reports those closures only make up 5% of Delta’s business, it shows that they’re thinking about potential second wave in a way that other airlines aren’t.

Like any summer-loving germaphobe, though, I’ve been checking and rechecking the Centers for Disease Control to tell me what to do with my summer. “Air travel requires spending time in security lines and airport terminals, which can bring you in close contact with other people and frequently touched surfaces,” states the air travel portion on the CDC website.

If you must travel, the CDC suggests washing your hands directly before and after completing the security screening process and preparing for security checkpoints by removing personal items from your person and placing them on your carry-on.

We're not saying that CDC approves, just yet, of your long weekend at the Ozarks or flying to your friend’s Los Angeles birthday rager. “Because travel increases your chances of getting infected and spreading COVID-19, staying home is the best way to protect yourself and others from getting sick,” the CDC says. More tips and things to consider here, if you're ready to book a ticket.

More like this
Mental health TikTok is vast and daunting. Here are 5 actually helpful accounts to follow
By Joseph Lamour
How scientists detect COVID-19 variants before they wreak havoc
By Darwin Bandoy and Bart C. Weimer
What does alcohol do to your skin?
By Tawny Lara
Stay up to date