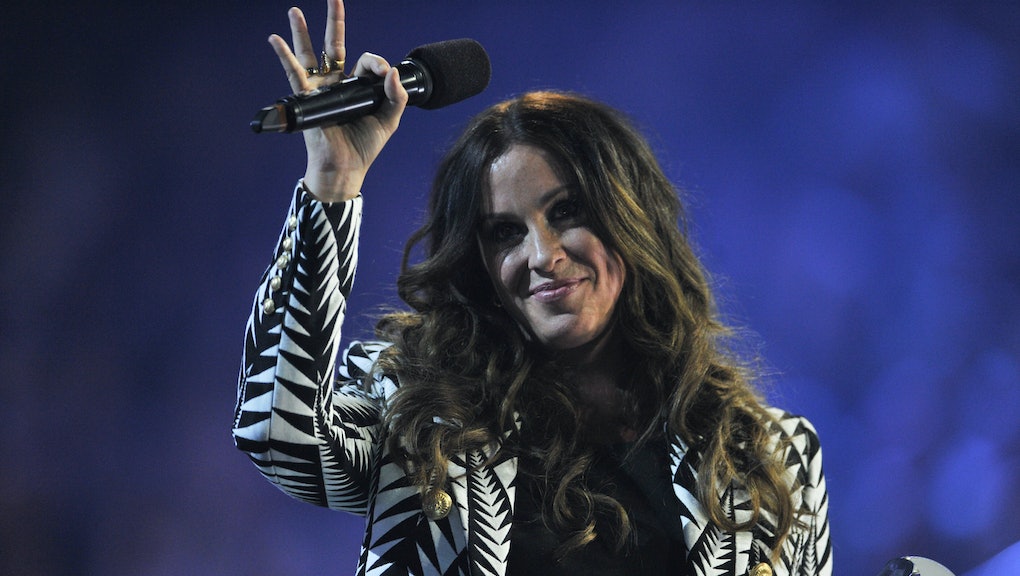 Alanis Morissette is really not happy with the 'Jagged' documentary

A new documentary about '90s indie pop icon Alanis Morissette premiered at the Toronto International Film Festival on Tuesday night, but the singer wasn't in her native Canada to celebrate the occasion. One one hand, she skipped the screening because she's on tour with Garbage and Cat Power, performing in Cincinnati, Ohio, on Wednesday. But the other reason Morissette didn't show up is because she's upset with how Jagged portrays her, calling the film "reductive" and "salacious."

The musician sat for extensive interviews with director Alison Klayman, even taking her on a pilgrimage to a storage locker stuffed with demos on cassette tape, home videos on VHS, and a duffle bag Morissette says is filled with love letters from boyfriends past. According to early reviews of the documentary, the singer comes off as funny, insightful and "almost ridiculously personable" — in contrast to the "angry young woman" she was labeled as when her scathing breakout hit "You Oughta Know" hit the airwaves.

The new film is not a redemption story, like so many other rock and roll documentaries, because Morissette has been doing great for a long time. It mostly centers on her massively successful third studio album, Jagged Little Pill, and it sounds like the project was pitched to her as a 25th anniversary celebration of the record. But there are a few times the film touches on more sensitive subject matter, like when she discusses battling an eating disorder or being sexually exploited as a teenager when she was starting out in the music industry. Though she volunteered this information on camera and doesn't name any of the men she says committed statutory rape, it seems she's upset this information wound up in the documentary.

Morissette sent a statement to Deadline on Tuesday after one of its reporters interviewed Klayman, further explaining her objections. "I agreed to participate in a piece about the celebration of Jagged Little Pill’s 25th anniversary, and was interviewed during a very vulnerable time (while in the midst of my third postpartum depression during lockdown)," she wrote. "I was lulled into a false sense of security, and their salacious agenda became apparent immediately upon my seeing the first cut of the film. This is when I knew our visions were in fact painfully diverged. This was not the story I agreed to tell. I sit here now experiencing the full impact of having trusted someone who did not warrant being trusted."

She noted she decided not to attend any events around the movie because she's touring, but added that "not unlike many 'stories' and unauthorized biographies out there over the years, this one includes implications and facts that are simply not true. While there is beauty and some elements of accuracy in this/my story to be sure — I ultimately won’t be supporting someone else’s reductive take on a story much too nuanced for them to ever grasp or tell."

It's no secret that the music industry has a predator problem. According to a survey by the Music Industry Research Association, 67 percent of female artists report being the victim of sexual harassment. Famously, Kesha sued producer Dr. Luke for "sexually, physically, verbally and emotionally" abusing her, drawing tons of attention to the issue. There's power in letting other victims know they're not alone. If Morissette is walking back her statements about her own experiences as a teen because she's ashamed — and this is purely speculation — then that is deeply sad.

"It’s a really hard thing, I think, to see a movie made about yourself," Klayman said, regarding Morissette's rejection of the documentary. "I think she’s incredibly brave and the reaction when she saw it was that it was a really — she could feel all the work, all the nuance that went into it. And again, she gave so much of her time and so much of her effort into making this, and I think that the movie really speaks for itself."

Interestingly, it's rare for a singer to reject a film about them these days, when most music documentaries are dressed-up PR stunts, meant to promote an album or tour. Think of the spate of Netflix artist documentaries, like Taylor Swift's Miss Americana, Beyoncé's Homecoming or Blackpink's Light Up The Sky. Apple TV+ produced one for Billie Eilish titled The World's A Little Blurry. When filmmakers have creative independence to interpret an artist's story, there's often friction. For example, the stirring 2015 documentary Amy, detailing singer Amy Winehouse's life and her struggles with substance abuse, was slammed by her father, who called it "misleading" and "preposterous."

It'd be one thing if Jagged spent a significant amount of time digging into the sadder moments of Morissette's life, but people who've seen the film say it only circuitously touches on her struggles. She's the one who volunteered the information she's now apparently upset about, and the documentary neglects to give her allegations the full #MeToo treatment. Only Morissette knows exactly what her objections are, but there's a clue about what's going on in a snippet of dialogue from the interview where she divulges she was the victim of statutory rape: "I'm going to need some help because I never talk about this," she confessed.