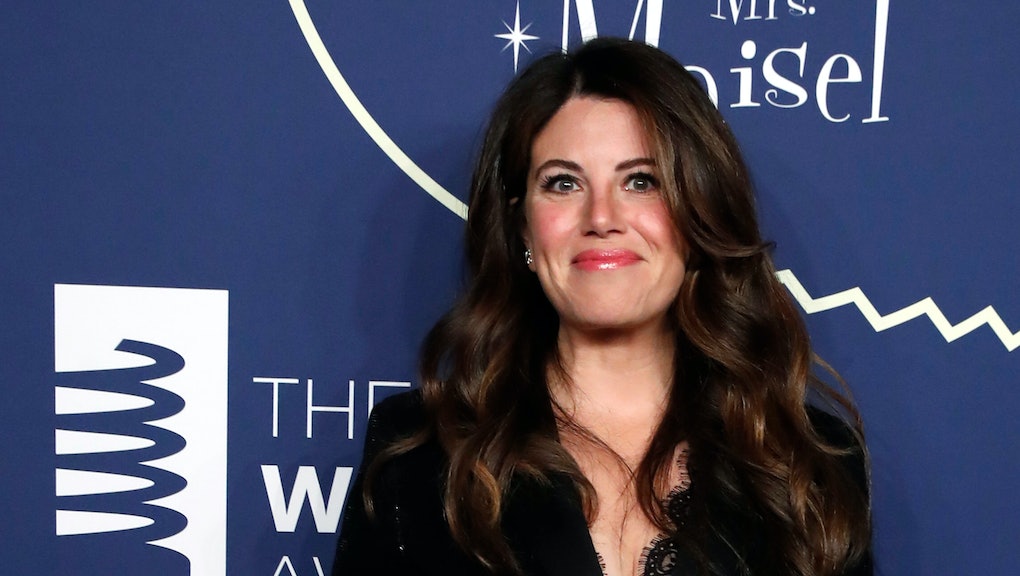 In the late 1990s, a 23-year-old Monica Lewinsky became the woman blamed for the misdeeds of one of the most powerful men on earth. In the years since she was villainized by the press and shamed by the country for her role in Bill Clinton's sex scandal, Lewinsky has made a momentous rise back into popular culture — on her terms. Now, she's producing a television series about her experience, called American Crime Story: Impeachment.

The upcoming third season of Ryan Murphy's anthology show was announced on Tuesday, August 6. Beanie Feldstein (of Booksmart fame) will star as the young Lewinsky, and the show will reportedly loosely follow the 1999 book A Vast Conspiracy: The Real Story of the Sex Scandal That Nearly Brought Down a President by Jeffrey Toobin. Sarah Paulson will take on the role of the woman who secretly recorded Lewinsky's private phone conversations with Clinton; the actors who will take on the roles of Bill and Hillary Clinton have not yet been announced.

Producing the show will give Lewinsky the opportunity to tell her side of the story in a more major way than ever before. "I was hesitant, and truthfully more than a little scared to sign on," she wrote in a letter published by Vanity Fair about the show. "People have been co-opting and telling my part in this story for decades. In fact, it wasn’t until the past few years that I’ve been able to fully reclaim my narrative; almost 20 years later."

Since the events of 1998, Lewinsky has earned a master's degree in Sociology from the London School of Economics and Political Science, become a television personality, authored an autobiography, and given numerous talks about women's empowerment and her own experiences, including a 2015 TED Talk called "The Price of Shame." Recently, she's begun to open up about her story in more detail. In February 2018, she wrote an essay for Vanity Fair on her place in the #MeToo movement. She described the post-traumatic stress she was diagnosed with in the years following the impeachment hearings, the work she's done to evaluate her trauma within the context of American society, and what a public reckoning for powerful men could mean.

"My hope, given the two dec­ades that have passed," Lewinsky wrote in 2018, "is that we are now at a stage where we can untangle the complexities and context (maybe even with a little compassion), which might help lead to an eventual healing—and a systemic transformation."

Since the essay's publication, Lewinsky has only continued to speak out. In addition to her essay for Vanity Fair, she appeared on A&E's The Clinton Affair later in 2018, and in March 2019, she appeared on John Oliver's Last Week Tonight to discuss the issue of public shaming.

On Twitter, meanwhile, she's carved out a digital space where she fights against bullying, promotes ideas she believes in, and responds to the ludicrous with a sense of humor. After a recent suggestion from Vice President Mike Pence went viral (Pence thinks we should be spending more time on our knees for prayer than on the internet) Lewinsky responded with a sly joke referring to her own scandal.

When she was praised by a user for her witty thinking, she responded with a response that acted as a somber reminder of the toll spending 13 months immersed in a national scandal likely took on her.

In the era of #MeToo, where many women's claims of sexual violence, coercion, and harassment aren't as easily dismissed as they used to be, it seemed almost inevitable that Lewinsky's story would be revisited. After all, she was in her early 20s when she became involved with Clinton, who was 30 years her senior and the leader of the free world. The subsequent attacks on her character by federal investigators ( most notably Ken Starr) and the media led to a portrait of an amoral, malicious, sex-crazed woman, instead of what she was: a 23 year-old intern.

Bill and Hillary Clinton never stepped in for Lewinsky or tried to deflect the endless attacks on her. Lewinsky was treated as collateral damage in a political agenda — and the American public wasn't receptive to other versions of the the story until recently. With the third season of American Crime Story, though, Lewinsky will get to be a part of a project that will, by telling her version of the events, stand up to the history that has already been written about her.

"I’m so grateful for the growth we’ve made as a society that allows people like me who have been historically silenced to finally reintroduce my voice to the conversation," Lewinsky said in her letter on the show. "This isn’t just a me problem. Powerful people, often men, take advantage of those subordinate to them in myriad ways all the time. Many people will see this as such a story and for that reason, this narrative is one that is, regretfully, evergreen."