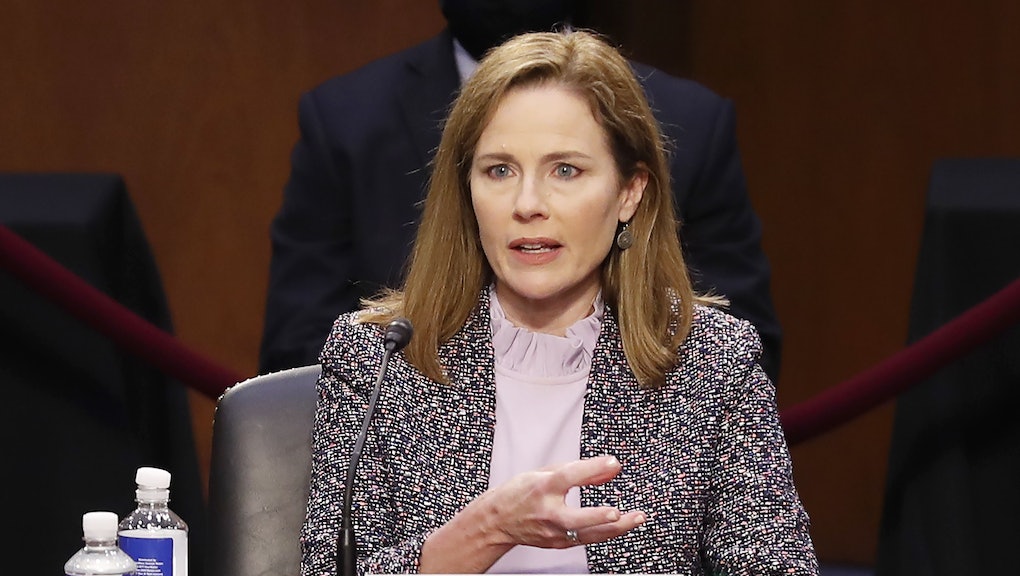 But when asked about climate change, she demurred, refusing to confirm that she has thought about the issue at all. Similarly, when asked if she had given any consideration to the idea of nuclear energy, Barrett said that no, she has not thought much about that topic.

It's telling that issues of climate change were the ones Barrett decided to shy away from, considering she has almost certainly run into the topic before. She’s college-educated and spent years in Washington, D.C. as a law clerk and lawyer. Her father, Michael Barrett, spent most of his legal career representing oil giant Shell, and Shell just happens to have a significant case in front of the Supreme Court regarding its contributions to climate change, according to The Daily Poster.

The entire premise of Kennedy's transparently silly line of questioning was to present the idea that it is okay for judges to have personal views on issues, and those views do not have to interfere with their ability to do their job. And Barrett went along with the bit. "One of the things about the judicial role that I’ve repeatedly emphasized in the hearing today," she said, "is that I’ve got personal views and personal feelings on a range of matters, just like every human does, and just like every judge or justice on the court does."

But on climate change? "I'm certainly not a scientist." Barrett also said she is not a tax lawyer when asked if she had opinions on taxation, but admitted to having thought about the issue. And her lack of expertise on the topic hasn't stopped her from issuing rulings on cases involving tax law. She also is not a doctor but has made her opinion known through her judicial rulings and dissents on a number of healthcare-related topics, including abortion.

Seeing as she is not a scientist, Barrett should have no problem leaning on the findings of those who are, should she become a Supreme Court Justice. Failing to do so and instead continuing to issue rulings that undermine environmental law or benefit the oil baron billionaires who are bankrolling efforts to put her on the court would suggest that she had an opinion on climate change the whole time — one backed by her own interests, rather than expertise.

More like this
Amid daily reports of catastrophe, Americans are finally starting to realize climate change is bad
By AJ Dellinger
Bernie Sanders simply does not care about your archaic Senate rules
By AJ Dellinger
This is what it looks like when a city floods in real-time
By AJ Dellinger
Stay up to date