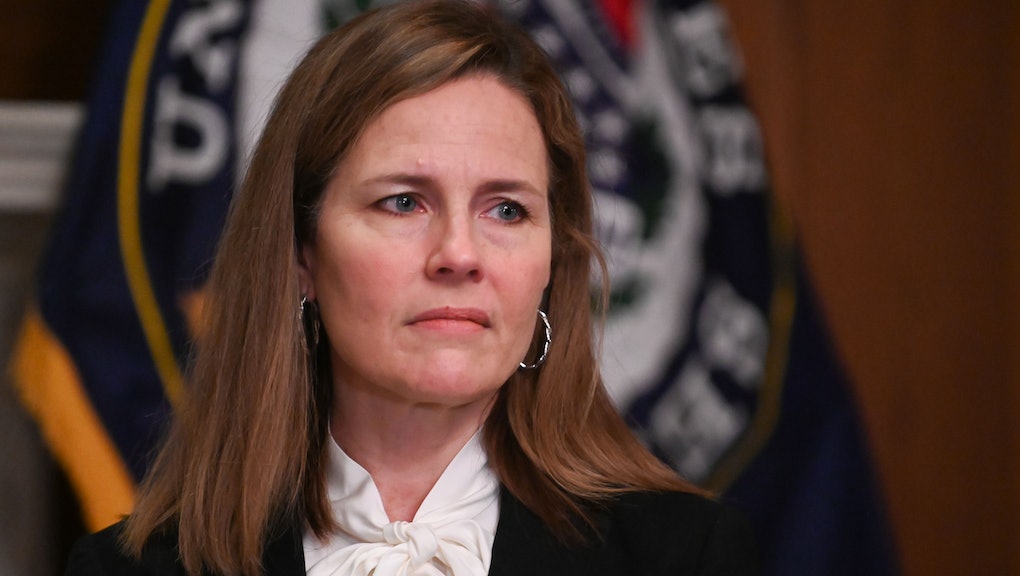 Senate Republicans have made it clear that nothing — not their own words, not the overwhelming public disapproval for a rushed nomination, not even the coronavirus — will stop them from putting Amy Coney Barrett on the Supreme Court. And according to filings made with the Federal Elections Commission and compiled by investigative publication Sludge, they aren't alone in their effort.

Billionaires, interest groups, and lobbyists have already pledged tens of millions of dollars to advertising campaigns urging Barrett's confirmation, the Sludge report found. Among the biggest backers are energy executives, Big Oil interest groups, and supporters of the continued use of fossil fuels. The roster of Barrett’s deep-pocketed fans suggests they believe she will be an important, potentially decisive vote on a conservative Supreme Court that could make it harder to pass and enforce environmental regulations.

According to the publicly available data, much of the money that has been used to run advertisements supporting Barrett comes from just a handful of groups: America First Action, Club for Growth, Americans For Prosperity, and the Judicial Crisis Network. According to Mic's review of FEC data, these organizations have raised at least $157 million since January 1, 2019, and have already pledged to spend millions on efforts to use Barrett's nomination to drum up support for Trump in November and make sure that Republican Senators don't defect from the confirmation process at the last minute, as the party has little room for error with only a three-vote majority. Here is a look at the shadowy organizations putting their money behind Barrett’s confirmation.

America First Action, a SuperPAC launched in 2017 to support the policy agenda of Donald Trump, has been the biggest spender when it comes to Barrett's nomination. According to FEC data, the organization has already dropped more than $60 million on ads and messaging for Barrett. One of the biggest donors to America First Action is Southern Company, a US-based gas and electric utility holding company. Southern Company is the second-largest utility firm in the country and generates nearly 75 percent of all its energy from fossil fuel sources, including natural gas and coal.

Another major America First Action donor is Kelcy Warren, a billionaire and CEO of natural gas company Energy Transfer Partners. Warren has given $10 million to the SuperPAC over the last 20 months, and he has plenty of interest in influencing the direction of the Supreme Court. His company is responsible for the development and operation of the Dakota Access Pipeline, a controversial oil pipeline that was rushed to completion despite environmental concerns and disruption of land belonging to the Standing Rock Sioux tribe. The pipeline has been the subject of an ongoing legal battle that could make its way to the Supreme Court, and Warren would likely prefer to have the court stocked with judges sympathetic to his company's interests.

Also tossing $3 million into the coffers of America First Action is Stephen A. Schwarzman, the CEO of private equity company The Blackstone Group. The multibillion-dollar investing firm has so much interest in oil and gas the sector has its own dedicated arm, Blackstone Energy Partners, and has spent billions on acquiring natural gas and oil fields. The company is also directly tied to a significant amount of deforestation and environmental damage that has occurred in the Amazon rainforest.

Warren Stephens, the chairman and CEO of private financial services firm Stephens, Inc., has put $1.5 million into the efforts of America First Action. Stephens' company got its start investing heavily in oil exploration in the 1940s and '50s, and the bank still has plenty of cash wrapped up in fossil fuels today. The Stephens, Inc. energy arm puts millions of dollars into oil and gas production and exploration and has invested in off-shore drilling, a sector that is likely to face a considerable amount of legal challenges under future administrations that choose to re-tighten the regulations that Donald Trump has loosened.

One of Barrett's biggest backers outside of America First Action is Americans For Prosperity, a conservative advocacy group founded by the Koch brothers. Since its founding in 2004, Americans For Prosperity has been decidedly opposed to environmental policies. The organization was instrumental in the foundation and development of the Tea Party movement, and pushed those groups to oppose Obama-era regulations designed to combat climate change. It also created the No Climate Tax Pledge, which it circulated among conservative candidates in 2008 and got them to commit to "oppose any legislation relating to climate change that includes a net increase in government revenue." Americans For Prosperity was also behind lobbying efforts that pushed for the construction of the Keystone XL Pipeline and fought to kill tax incentives for renewable energy sources.

Charles Koch and his sprawling company, Koch Industries, are the biggest donors to Americans For Prosperity, delivering more than $13.5 million to the organization in the last 20 months. Koch Industries has been heavily involved in gas and oil since its founding in 1940, and still has significant ties to the industry. According to Greenpeace, Koch Industries subsidiary Koch Pipeline Company operates more than 4,000 miles of oil and gas pipelines across the United States. It also operates Flint Hills Resources, an oil company that is responsible for producing more than 670,000 barrels of crude oil per day.

Joining Charles Koch in filling up the coffers of Americans For Prosperity is Richard Baxter Gilliam. Gilliam, who has recently given $1.3 million to the conservative advocacy group, is founder of Cumberland Resources, one of the largest coal extraction companies in the country. With a major case involving a coal export terminal heading to the Supreme Court this session, Gilliam and his company have a vested interest in an outcome that would make it easier for coal to be exported to other countries.

Americans For Prosperity has not been shy in its mission to put Barrett on the Supreme Court. In an interview with CNBC, the organization's ice president for legal and judicial strategy, Casey Mattox, said, "A full-scale campaign is now underway to mobilize our grassroots activists across the country to drive the confirmation of Judge Amy Coney Barrett to the high court." The campaign will include phone banking, direct mailers, and digital ads that will run through the nomination process in an effort to push Senators to support Barrett's candidacy.

Also joining in the effort is Club for Growth, a two-decades-old conservative activist organization. Since January 1 of last year, Club for Growth has pulled down more than $48 million dollars from its donors. And while the organization's top priority is cutting taxes and pushing free-market principles, it has managed to place itself on the far right of the spectrum when it comes to climate science. It has opposed environmental policy at every turn, even using its funds to fight against cap and trade policies that began as a Republican-backed idea and criticizing Mitt Romney for acknowledging that climate change is real. Club for Growth pressed Donald Trump to leave the Paris Climate Agreement, and got its wish.

Club for Growth recently announced a new national advertisement aimed at pushing Senators, particularly ones in vulnerable seats, to confirm Barrett. The Washington Examiner found versions of the ad running in Utah and Alaska, targeting Senators Mitt Romney and Lisa Murkowski and asking constituents to urge them to support Barrett.

The multimillion-dollar effort to push Barrett to the Supreme Court, backed in large part by gas and oil interests, suggests that those groups believe they have an ally in waiting in the prospective Supreme Court justice. While she doesn't have a long history ruling on environmental issues — or on any issues, for that matter, as she has only been a judge for three years — there are plenty of indications that she would side with corporations over individuals, communities, and government regulators. An analysis conducted by watchdog group Accountable.us found that Barrett sided with corporations over people in 44 out of 55 cases that she heard while on the Seventh Circuit Court of Appeals.