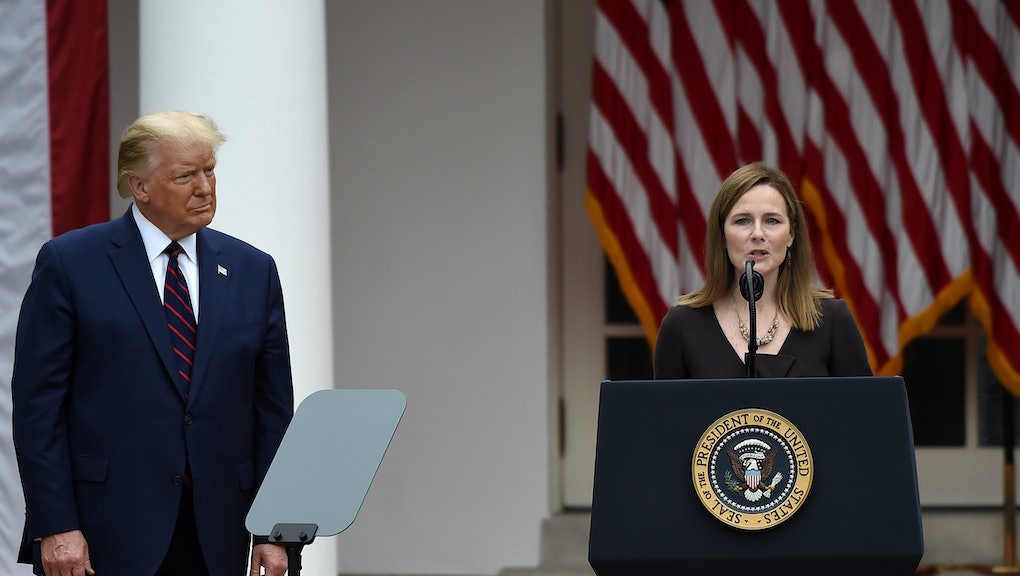 How might Amy Coney Barrett rule on environmental issues?

President Trump has nominated Amy Coney Barrett to fill Ruth Bader Ginsburg's seat on the Supreme Court. This is terrifying for a number of reasons. Setting aside the blatant and shameless process itself — Republicans have decided to ignore the precedent they set to block President Obama's nominee in 2016 — the potential confirmation of Barrett on the highest court in the country could result in decades of a conservative majority that would threaten foundational decisions from prior, less polarized Supreme Courts. (Unless, of course, emboldened Democrats grow spines and pack the court after the election.)

Barrett could be the deciding vote on attempts to overturn abortion rights, repeal the Affordable Care Act, and continue to roll back voter protection efforts. She may also serve as a foundational piece of a conservative voting bloc at the Court that could make it harder to enact and enforce environmental protections at a time when they are needed most.

Barrett's limited history "strongly suggests that she would be willing to reexamine the bedrock doctrines on which environmental law is based." - Sam Sankar

Barrett, who was appointed to the Seventh Circuit Court of Appeals by President Trump in 2017, does not have an extensive history dealing with environmental cases, in large part because she simply does not have an extensive history as a judge. But based on her writings and rulings in the cases she has heard, experts fear she will be a consistent opponent to the enforcement of environmental protections. Sam Sankar, the senior vice president of program at the non-profit environmental law organization Earthjustice, tells Mic that Barrett's limited history "strongly suggests that she would be willing to reexamine the bedrock doctrines on which environmental law is based."

One case that points to how Barrett may come down on environmental rulings, according to the League of Conservation Voters's judiciary program director Ben Driscoll, is Kleber v. CareFusion Corporation.

The 2019 case, heard by the largely conservative Seventh Circuit Court of Appeals, involved a 58-year-old job applicant suing a company for hiring a 29-year-old who had less relevant experience than him. Barrett was part of a majority ruling on the case that said the Age Discrimination in Employment Act (ADEA) does not apply for outside applicants, denying the older candidate's claims that he was discriminated against. "It reflects this issue we have as an environmental organization about protections being available only for the powerful, not for those standing on the outside looking in," Driscoll explains to Mic. "I think there are several areas where we're seeing real serious concern where she's going to raise the bar significantly for those trying to seek protection for the environment."

He also raised the case of Protect Our Parks, Inc. v. Chicago Park District, one of the few environmental-related cases that Barrett has issued a ruling on. The case, filed in 2018 and decided earlier this year, saw a small group of environmentalists fighting to keep the Obama Presidential Center, a planned structure that will house artifacts and documents from the Obama administration, from being built in Chicago's Jackson Park. The protectionists argued that the city did not have the authority to make public parkland available for a private construction project.

He explains that in the landmark court case Friends of the Earth, Inc. v. Laidlaw, the Supreme Court ruled that plaintiffs do not have to prove actual harm caused by violations of environmental law, but rather perceived harm. "She reversed it, and suggested there was an even higher burden," Driscoll says.

It's worth noting that in the Laidlaw case, only two justices dissented from the majority decision issued by the Supreme Court: Justices Clearance Thomas and Antonin Scalia. Barrett served as a judicial law clerk for Justice Scalia from 1998 to 1999, just prior to hearing the Laidlaw case. Barrett is viewed as a disciple of Scalia, sharing the late Justice's theory of originalism, which holds that the Constitution should be interpreted on the basis of the original intentions of the authors, rather than treated as an evolving document meant to keep up with the times.

Scalia, like Barrett, did not appear to have a strong opinion on environmental issues as a whole, but did often rule in a way that favored the anti-environmental outcome. In his 30 years on the bench, Scalia was credited with leading the way on rulings that have limited the ability of environmental groups to bring lawsuits, fight against the encroachment of polluters, and enforce environmental regulations.

Barrett could follow in Scalia's footsteps on this front, skirting any real position on environmental issues but regularly issuing rulings that restrict the ability of people to protect the environment. "We have strong concerns about how she's going to rule on cases of communities trying to stand up to powerful corporations who are polluting our air or their water or trying to seek enforcement of environmental laws that have not been enforced in the past," Driscoll says.

One area in which Barrett could extend the legacy of Scalia, and in turn potentially weaken the power of environmental regulations, is the nondelegation doctrine. This doctrine, also sometimes referred to as Chevron deference, stems from the 1984 ruling in Chevron v. Natural Resources Defense Council, in which the Supreme Court decided that federal agencies have the ability to interpret and enact legal statutes on its own when Congress has failed to provide clarity on the matter.

The ruling has been essential in allowing agencies like the Environmental Protection Agency to pursue regulations under the vague goals established in laws like the Clean Air Act and the Clean Water Act, essentially trusting the agencies to know how to best achieve those outcomes. A number of conservative justices already on the Supreme Court have expressed a willingness to revisit this ruling and potentially overturn it, and Barrett's writings suggest she would likewise be willing to upend the decision if given the opportunity. "Conservative Justices have proposed reviving this doctrine as a way to undercut government regulations in many areas, including pollution control," Sankar warns.

Should Barrett find her way to the Supreme Court in what is sure to be one of the most contentious nomination processes ever, several important environmental cases will quickly wind up in front of her, giving her an early opportunity to show where she will fall on these matters. Sankar says his organization is closely monitoring the case of Sierra Club v. Fish and Wildlife Service, a battle that focuses on the government's refusal to hand over documents requested through the Freedom of Information Act. "The Trump administration is trying to block public interest groups from reviewing materials that would explain how it made certain decisions under the Endangered Species Act," he explains. He also pointed to Kane County, Utah v. the United States, a case in which officials in Utah are fighting to keep environmental groups from having a say in a dispute over the ownership of public lands.

"Both cases would further the right-wing activist agenda in the courts, making it even harder for the public to use courts to hold the government and industry accountable to our nation’s environmental laws," Sankar says.