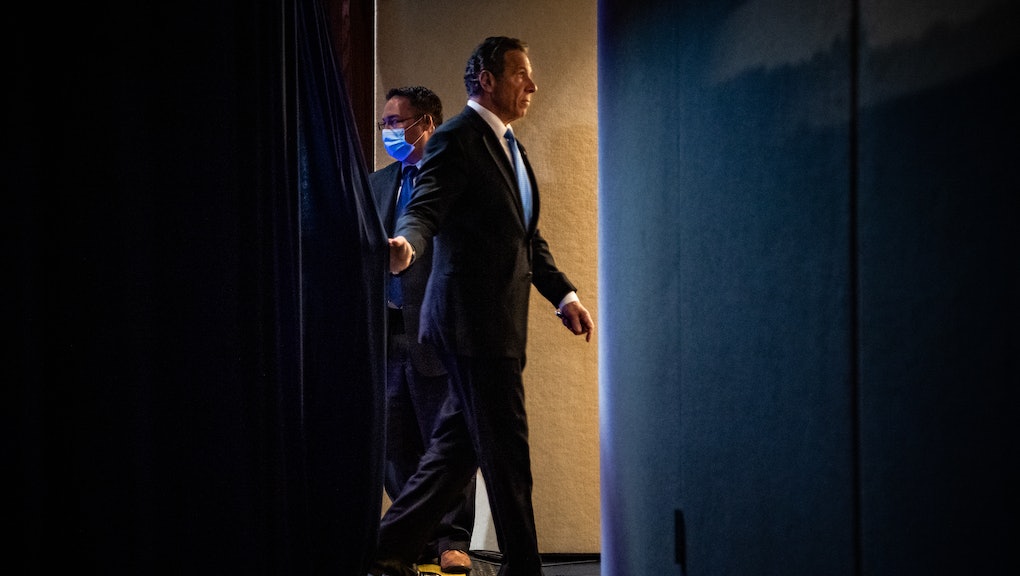 Andrew Cuomo just put in his two week's notice. The current governor of New York announced Tuesday that he will resign from the position, effective in 14 days. The decision to step down follows multiple allegations from former staffers and state employees accusing Cuomo of sexual harassment and assault. An investigation into his behavior conducted by New York State Attorney General Letitia James substantiated those claims.

Cuomo announced his decision to step aside during a press conference held Tuesday, one week after the release of the attorney general's report, which found the governor had sexually harassed at least 11 women.

Cuomo started the press conference by defending himself, rolling out a familiar explanation that he has used since the accusations came to light: he's a touchy-feely guy who didn't realize that was no longer acceptable. "I didn’t realize the extent to which the line has been redrawn," he said before eventually thanking the women for coming forward and saying, “I accept full responsibility.”

"My instinct is to fight through this controversy," Cuomo explained, insisting that "if I could communicate the facts through the frenzy, New Yorkers would understand," before eventually resigning himself to, well, resigning. Cuomo acknowledged that further investigation into his behavior and an eventual impeachment "will consume government, it will cost taxpayers millions of dollars, it will brutalize people." To avoid that — or, more likely, to avoid further embarassment and damage to his reputation —Cuomo said that he would step aside.

Cuomo's last day in office will be August 24. Governing power will be transferred to Lieutenant Governor Kathy Hochul, who will become New York's first ever woman governor. She will hold the office until November 8, 2022, when New York's next gubernatorial election is scheduled to take place. Cuomo was expected to run for his fourth term.

Accusations of sexual harassment against Cuomo first came to light in December 2020, when one of his former staffers, Lindsey Boylan, published her account of how she was treated while working in the Governor's office. Shortly after, a second accuser came forward. Then a third. While Cuomo maintained that he did nothing wrong throughout, an investigation conducted by his state's own attorney general found otherwise. The investigation — which included 178 interviews with witnesses and a thorough review of emails, text messages, audio files, and photos — concluded that Governor Cuomo harassed state employees, intimidated and retaliated against accusers, and violated both federal and state law, and "created a hostile work environment."

More like this
Biden's new office to fight for environmental justice already faces an uphill battle
By AJ Dellinger
How the shock and confusion of 9/11 enabled our modern conspiracy era
By AJ Dellinger
Vaccines are good. Threatening to evict someone over them is not
By Rafi Schwartz
Stay up to date