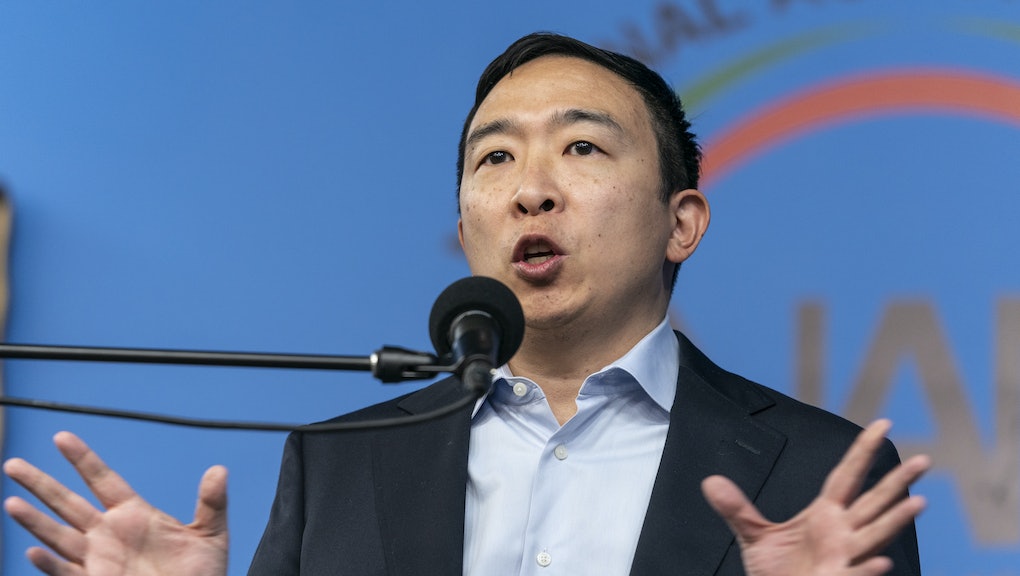 Tech entrepreneur-turned-universal-basic-income-adherent Andrew Yang was never going to win the 2020 presidential election. But Yang's quixotic run for the Democratic nomination managed to vault the political newbie into prime position to become the next mayor of New York City — or maybe not. Following an extensive report published Monday by Business Insider, Yang's mayoral run must now contend with allegations that the candidate's last campaign was rife with sexism, harassment, and a toxic "bro culture" that allegedly left multiple female staffers in need of therapy to process their experiences.

According to the report, one former staffer described Yang's presidential campaign as "being run by bros who promote bros," often at the expense of female employees who felt passed over for promotions, disregarded for their contributions, and generally undervalued.

"It fucked up my self-worth to be constantly belittled and bullied," one woman told BI, while another described her time with the campaign as "like being a second-class citizen" who had "no support" from her supervisors.

In a statement to BI, Yang apologized for his campaign's inability to adequately address reports of harassment and discrimination. "We were clearly unable to ensure that every employee was heard and respected," he said, adding that, "We didn't account for how much our male-dominated culture alienated female and non-binary employees. I wish we had. For that I am deeply sorry."

Allegations of gender blind spots and discrimination are all the more significant for Yang, given the former entrepreneur's much-lauded acknowledgement of the inherent sexism in American society during the democratic primary debates. "If you get too many men alone and leave us alone for a while, we kind of become morons," he said during the sixth debate. That same night, he stated, "our country is deeply misogynist, and most all of us know that."

Whether Yang's inability to address the alleged sexism of his presidential run will affect his current bid to become the next New York City mayor remains to be seen. In his statement to BI, he made a conspicuous effort to put those issues behind him.

"We learned a lot from Yang 2020," he said. "Many of those responsible for the problematic culture are no longer with the campaign. This time, we made sure that women, including women of color, were leading."

We'll have to see if that leadership is enough to take him all the way to Gracie Mansion.