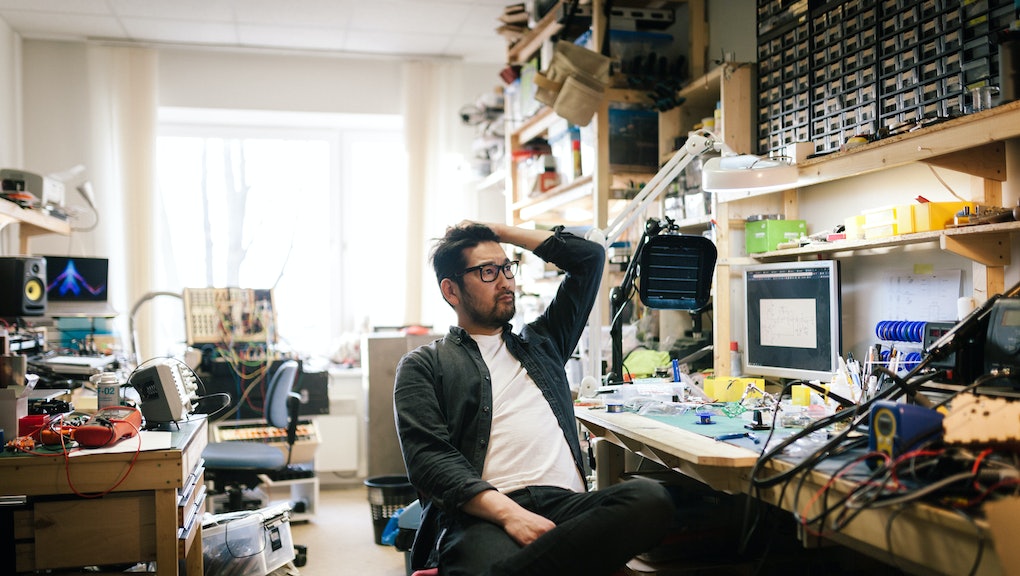 I’ve always been a bit embarrassed about my natural tendency towards tidiness, like it somehow disqualifies me from being a “real artist.” Last year, when I was in a creative rut and obsessively sweeping, I asked a sculptor friend if she thought creatives had to be messy. My friend, who is both a fantastic artist and a fellow neat freak said, "Not if they take their work seriously.” That made me feel a little bit better, but I wanted to investigate. Is the connection between messiness and creativity just a myth?

“While we love the simple and sensible idea of messiness equating to mental haphazardness, most research indicates that those correlations are simply not accurate,” says Mary Hoang, an Australian psychologist and founder of The Indigo Project, an online platform for progressive therapists and mental health advocates. “This is a superstition,” adds Nancy Irwin, a California-based clinical psychologist. “Some people have formed a positive association with clutter, just as some have formed a positive association with drugs or cigarettes or excessive alcohol.” Don’t get me started on the myth of the alcoholic artist.

What Irwin implies is that messiness operates like any other habit association. It’s like people who connect smoking with relaxation; the habit association works for them, even though nicotine is actually a stimulant. “If one truly believes their creativity comes from clutter, then they may only feel creative in their messy environment,” Irwin asserts. “This is the placebo effect, and mess has no real neurological benefit on creativity in and of itself.”

“The 'messy artist' myth is related to the struggling artist trope and further supports the all-too-common notion that artists are disorganized individuals who are 'crazy' for pursuing their passions,” says Haley Neidich, a Florida-based psychotherapist. “While there is certainly a group of artists who struggle with mental illness, disorganization or both, the majority of creative folks understand how essential their environment is to their mental health and their ability to produce work. Not all artists and geniuses are messy.” I don’t know who needs to hear this, but you do not need to be an alcoholic slob to be a “real artist.”

Some artists, in fact, are obsessively neat. “I create a lot of art while neurotically maintaining an orderly workspace,” says Pablo Solomon, an Austin-based visual artist who also happens to be a retired counselor.

“I know artists are ‘supposed to be’ a little sloppy and people explain away their unkempt quirks by virtue of being an artist, but I've always felt a little judgmental about it,” says Brice LaGrand, a circus performer in Albuquerque. “My job is to put on a sparkly costume and entertain an audience and I consider being organized a necessity,” he says, adding that professional artists should be held to the same standards as other professionals.

“I don't have time to run all over my house trying to find a pair of finger cymbals or tights immediately before a show,” LaGrand says. I really feel this. And it’s not just a matter of being a prepared professional. It’s also that inspiration can be ephemeral, and sometimes you’ve got to be quick to catch it. When it comes to the moment of creation, digging through piles of debris to find a paintbrush or your laptop charger could be a major impediment to being able to make something when you have the time and inclination to work.

But organization can be really different for folks. I, for example, obsessively sweep, but there are piles of ideas in the form of objects (imagine a stack of books with some feathers and a plastic dinosaur on top) all over my house. Some people might consider that to be messy, but that’s just how I think. “I tend to be well organized, but I also have a way of spreading out and maximizing my use of a space,” says J.B. Shepard, a multimedia artist in Baltimore. “It might look like clutter to the uninitiated, but there’s a method to the madness.”

“Some people create order and structure in their external environments and it gives them license to explore more adventurous, chaotic and unconventional lines of thought,” says Hoang. “Alternatively, other research suggests that disorderly environments may inspire a breaking free of tradition and introduce fresh insights.” So really, different strokes for different folx.

So it’s not clutter or cleanliness that makes an artist. It’s both. Making art, particularly now, when all artists must also be marketing mavens, is really a matter of balancing out the chaotic debris that may inspire creation with the order that responsible follow-through demands. “Creation of any kind is messy business,” says David Ranalli, a Chicago-based magician, “but artists who are successful know how to tame themselves and the objects they use to manifest their art.”

More like this
Sex workers deserve to eat well. And Meals4Heels delivers
By Lovely Brown
The travel industry still ignores people with disabilities
By Brian Garrod
The practice of sex selection is going to cost us 5 million girls in the years to come
By Melissa Pandika
Stay up to date