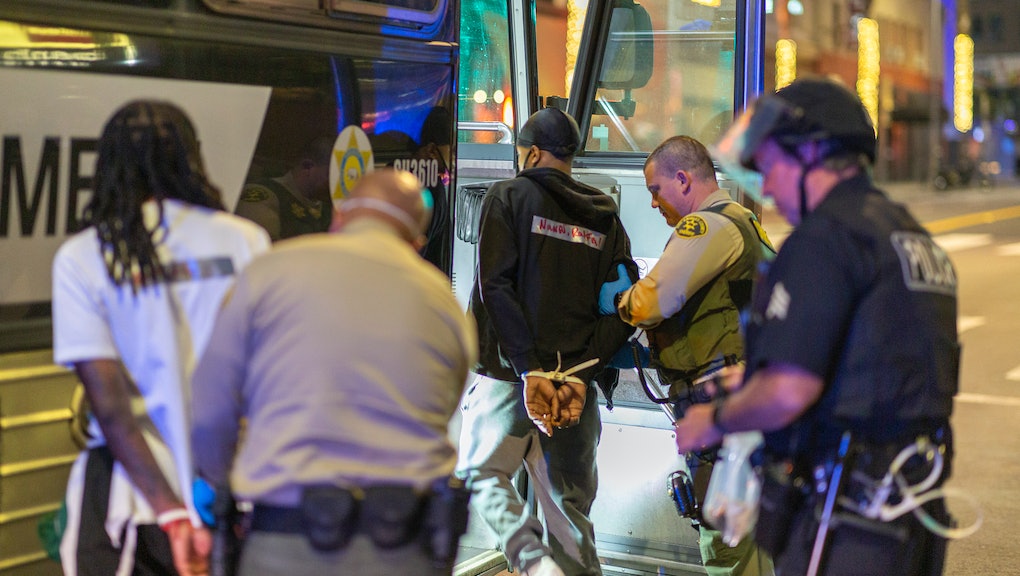 The U.S. is embroiled in two simultaneous conflicts. The fight to stop the spread of COVID-19 is international, and domestically, we are battling against police brutality and white supremacy. It’s worth mentioning that, over the course of history, the latter has been a far deadlier war. But while some of us worry obsessively about protestors spreading coronavirus, what we should actually be worrying about is how arresting and detaining thousands of people could exacerbate the pandemic.

Masked and socially distant outdoor protests do pose some risk, but the danger of spreading COVID-19 in enclosed indoor spaces is significantly higher.

The reality is that while, yes, the protests do mean that people are gathering en masse, which is not recommended by infectious disease experts, they are gathering outdoors. Most public health experts agree that the risk of catching or spreading COVID-19 outdoors is low, and that the fast paced nature of the demonstrations themselves reduces that risk. Many people protesting are wearing masks, and protest organizers and politicians, like AOC, who support the protests, are widely disseminating guides on how to protest safely on social media.

Masked and socially distant outdoor protests do pose some risk, but the danger of spreading COVID-19 in enclosed indoor spaces is significantly higher. Jails have often been used as an example of what the perfect breeding conditions for the virus are. The novel coronavirus spreads most easily when people are in close proximity with limited airflow. Given these facts, if we are really invested in the health and well being of the populace, it seems like authorities should be arresting as few people as possible.

But that’s not what’s happening. So far, over 2,700 people have been arrested during protests in Los Angeles. California is both a central hub of police brutality protests right now and also has one of the highest rates of COVID-19 infection in the country. About a thousand of the people arrested in L.A. were taken into police custody. While arrest procedures vary some by state, they generally involve being photographed, fingerprinted, and booked. This can all happen at the scene, but if a person is taken into custody, it means they will be taken to a local police station for processing.

So, then, just in Los Angeles, that’s at least 1,000 extra people being forced into enclosed spaces where they have lost their right to move freely. I’m no geometrist, but that sounds like the perfect storm for creating the “super spreader” conditions public experts warned us about. The disregard for protecting the public that law enforcement is demonstrating is really no surprise, though, given that 45 has consistently demonstrated his lack of concern for Black lives and urged governors to arrest protestors and put them in jail.

Almost 10,000 people have been arrested across the country so far, in protests against the murder of George Floyd. Last night in New York City, protestors were arrested for such minor offenses as breaking curfew. Perhaps we should be a little less concerned with U.S. citizens exercising their constitutional right to resist oppression, and a little more concerned about the senseless number of arrests police are making.

Public health experts are also begging police to stop using aggressive tactics, like tear gassing, to reduce the spread of infection. This terrifying confluence of events should force us to reconsider what it means to “protect and serve.” From where I stand, exposing people to increased risk of contracting a deadly virus for minor infractions is just a novel strain of police brutality.

More like this
I chased my J&J vaccine with a shot of Pfizer. Here's why
By Tracey Anne Duncan
Will full FDA approval convince the vaccine hesitant?
By Melissa Pandika
Tinder for anti-vaxxers is my actual nightmare
By Melissa Pandika
Stay up to date