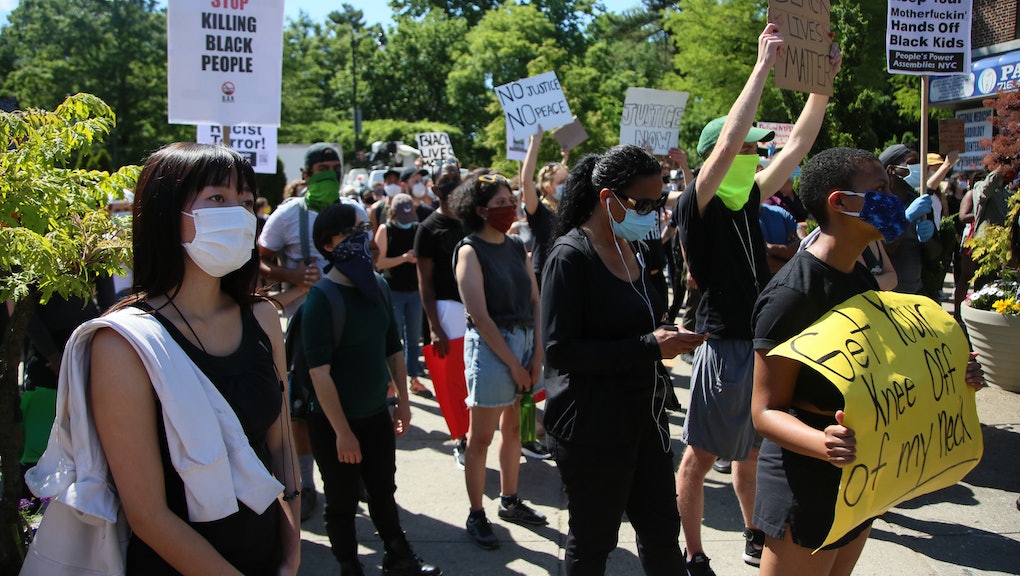 Should protesters be worried about catching or spreading coronavirus?

This past weekend held uprisings in cities across the U.S. in response to the police killing of George Floyd. While protest safety is always a concern, the still potent threat of coronavirus is causing another worry — could gathering, even outside, cause another spike in COVID-19? Over 100,000 Americans have died from the novel coronavirus so far, and it’s become evident that Black and Latinx people have been disproportionately affected. But police brutality is another public health concern that primarily affects BIPOC, and a lot of people seem to be waking up to the fact that it is an issue that warrants mass resistance.

When weighing out the dangers of these protests fueling the spread of the virus, the first thing to keep in mind is that the protests are taking place outdoors. “The outdoor air dilutes the virus and reduces the infectious dose that might be out there, and if there are breezes blowing, that further dilutes the virus in the air,” William Schaffner, an infectious disease expert at Vanderbilt University, told the New York Times. Schaffner went on to explain that the dynamic mobility of the protests made them less likely to become the “super spreader” events that politicians fear. “There was literally a lot of running around, which means they’re exhaling more profoundly, but also passing each other very quickly,” he told the Times.

But the proximity of human bodies is indeed an issue. Public gatherings during infectious disease pandemics have historically been linked to increased infection rates, such as a Philadelphia parade in 1918 that led to spikes in the flu pandemic, noted Howard Markel, a medical historian at the University of Michigan, in the Times. Those correlations are important to consider, but before you freak out, try to keep in mind that the average citizen today knows a lot more about hygiene and contagion that they might have in 1918.

Police brutality is another public health concern that primarily affects BIPOC, and a lot of people seem to be waking up to the fact that it is an issue that warrants mass resistance.

The greatest concern to infectious disease experts, it appears, is that the novel coronavirus is often spread by asymptomatic carriers. It’s fair to assume that the folx demonstrating have a relatively strong desire to keep each other safe, but there’s a fear that asymptomatic people might now not wear masks or keep a safe distance from others because they don’t know they are risking the health of others. Markel also noted, in the Times, that the emotional nature of protests may cause people to behave in unsafe ways.

So, how worried should we be that the protests will contribute to a second wave of infections? While it’s on a lot of our minds, this could be an abstract question to ask. Experts have already warned us to get ready for a second wave, and the truth is that it may be difficult to parse out the tipping point when it comes. States reopening for business, Memorial Day celebrations, and protests are all potential vectors. My deepest hope is that we can start focusing on how we can protect the people who are most vulnerable to both COVID-19 and also systemic, and often fatal, oppression.

More like this
All 4 officers involved in George Floyd's death will face federal charges
By AJ Dellinger
How scientists detect COVID-19 variants before they wreak havoc
By Darwin Bandoy and Bart C. Weimer
This new coronavirus-repelling mask has a shady chemical in it. Is it worth it?
By C. Michael White
Stay up to date