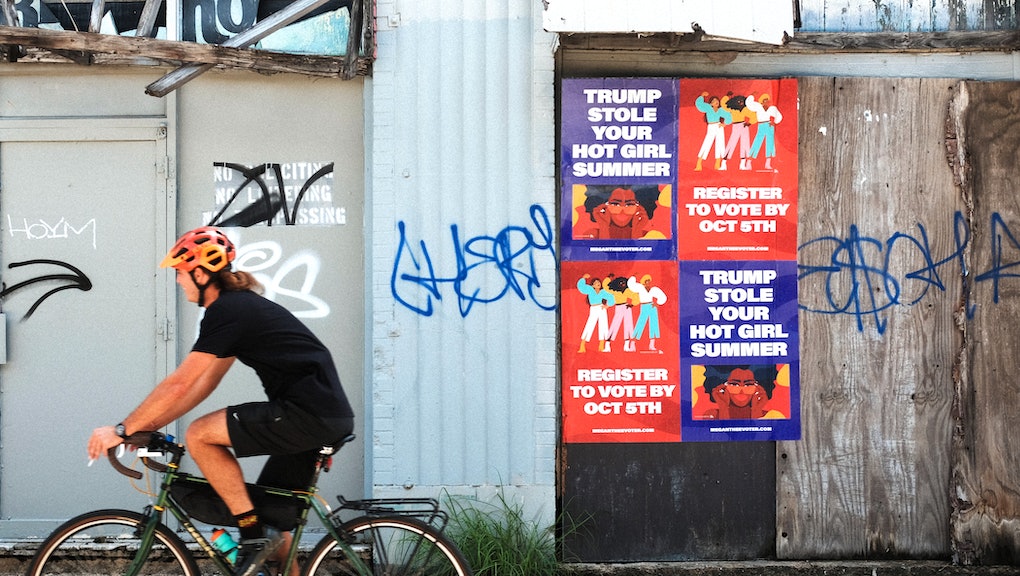 As the voter registration deadline crept up in Texas, flashy posters pushing civic engagement appeared in Dallas and Houston. “Trump stole your hot girl summer,” read one, atop an illustration of the aforementioned hot girl peering judgmentally over her sunglasses. Its twin, featuring an image of stylish women with their fists in the air, encourages passerby to “Register to vote by October 5.” The link on both posters — MeganTheeVoter.com — redirects to Ballot Ready, a comprehensive toolkit for prospective voters.

Joe Biden’s official campaign has unleashed a whole flurry of pandemic-era digital strategies — everything from Zoom backgrounds to Animal Crossing yard signs. But lots of progressives are worried it’s not enough. “In 2016, barely 50% of Americans voted. There's too much at stake to settle for low turnout in 2020,” argues the Public Square Project, the newly-formed non-profit behind the “Megan Thee Voter” posters. Officially, they have nothing to do with the Biden/Harris campaign or the Democratic establishment. They’re an independent coalition of creatives formed to galvanize first-time voters with culturally-relevant grassroots campaigns.

“I'd been a bit unenthused by some of the more traditional political messaging I'd seen and, in particular, didn't think it did enough to appeal to younger voters,” TV and film writer Kara Brown told Mic. She co-founded Public Square Project with her friends Anjelica Triola and Teddy Gold. “Basically, I wanted a political ad that a politician wouldn’t run,” Brown said.

Her first idea was to put up billboards around Big Ten schools reading: “You could be at a football game right now if Trump had acted sooner.” Brown told Mic she “wasn’t quite sure if this was even a good idea,” but her friends with know-how in politics and branding were enthused. They purchased some ad space in battleground states, solicited more ideas from fellow writers and comedians, and collaborated with artists like Lo Harris to match their messaging with dynamic visuals. Thus, the “Megan Thee Voter” campaign was born in Texas, to drive voter registration ahead of the deadline there.

Public Square Project is rolling out a number of other campaigns this month in other contentious locales. “Cancel out a racist’s vote” posters designed by Alvaro Ilizarbe went up in Detroit, Michigan, and Philadelphia, Pennsylvania, at the beginning of October. “Super rich kids with nothing but fake friends” emblazoned on a picture of Ivanka Trump and Jared Kushner will appear in Los Angeles this week. Public Square Project is encouraging people to tag them on Instagram if they spot the posters out in the wild.

This grassroots coalition of creatives is hardly alone in their political agitating efforts this fall. Before the first presidential debate in Cleveland last week, a group called Artists United for Change installed nine anti-Trump billboards along the route the president’s motorcade took to the venue. They also plastered downtown Cleveland with hundreds of posters encouraging passerby to “Remember What They Did” and #VoteThemOut in November, featuring art by the likes of Claudio Martinez and Shepard Fairey. Matching campaigns are rolling out in contentious states like Arizona, Michigan, Wisconsin, and Pennsylvania.

Right now, there’s also a huge fine art fundraiser unfolding online, Artists for Biden, organized by influential gallerist David Zwirner. Jeff Koons donated a sculpture of an American flag styled like a balloon on the precipice of popping. (It's listed at $10,000 and sold already.) Fairey gave a poster honoring the late John Lewis. Cindy Sherman contributed a self-portrait that could double as a trailer park Melania Trump if you squint a little. All told, the sale features work by more than 100 of the most famous names in contemporary art and could deliver a windfall of donations to the Biden/Harris campaign.

Truly, all sorts of creative industries are retooling operations to protect democracy this fall. Last week, beauty insiders launched a start-up selling makeup sponges to raise money for the Biden Victory Fund. The fashion industry has also harnessed the lucrative promise of voting merch. Of their own volition, famous faces from Frank Ocean to Kylie Jenner are using their influence to register voters. On one hand, it’s encouraging to see so many artistic-minded folks getting involved in politics. But on the other, witnessing creatives pull out all the stops in service of ousting Trump from the White House underscores what a strange and consequential election we face.