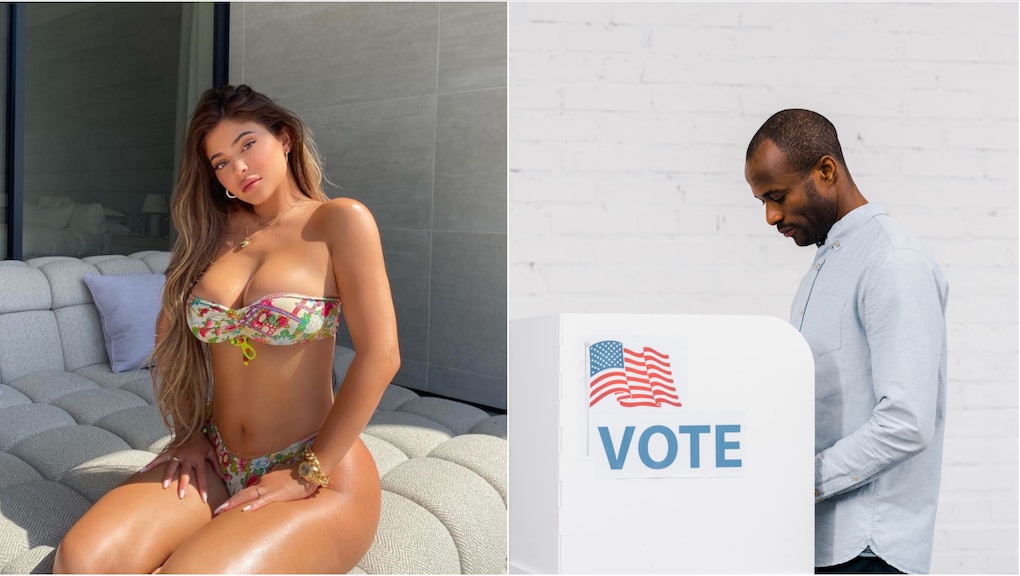 Lots of us are feeling nervous about the impending presidential election. That includes celebrities, who’ve been pushing voter registration on their platforms in a major way. Stars have gotten increasingly vocal about politics in recent years; the 2016 election and the scary prospect of Trump leading America galvanized lots of entertainers to lobby against him. Alas, nearly four dark years of his administration have elapsed, and with the integrity of the upcoming 2020 election jeopardized by the president himself, it’s become starkly clear that it’s up to individual Americans to make sure their votes are cast and counted.

To that end, stars of all wattages are focused on mobilizing potential voters — in other words, their fans — to make sure they’re registered and have a plan for casting their ballot. Honestly, it’s hard to find a celebrity who hasn’t posted a “please vote” missive on social media lately. And to be clear, that’s a really positive thing. In the digital age, so many aspects of our lives are governed by what we encounter online. As Kimberly Wehle wrote for The Hill, “celebrity influencers must step up in droves to spread the nonpartisan message that ‘We the People’ must cast votes for democracy itself.”

The celebs have delivered on that front. Tons promoted National Voter Registration Day, on September 22, on their social platforms. Taylor Swift shared a series of voter resources with her more than 140 million Instagram followers, emphatically adding, "We need everyone, and it is more important than I can even possibly say.”

Kerry Washington unleashed arguably the sneakiest scheme to boost civic engagement, tweeting “SCANDAL THE MOVIE. Click the link for more info…” alongside a gif of her character locked in a steamy embrace with Tony Goldwyn. As you might’ve guessed, “bit.ly/Scndlmvie” redirects to the When We All Vote website, former First Lady Michelle Obama’s nonpartisan organization that’s also tapped the talents of Jennifer Lopez, Tracee Ellis Ross, and Zendaya to get out the vote.

Other stars have also found cheeky ways to game the algorithms that govern our timelines. Kylie Jenner dropped a pretty standard bikini-clad thirst trap on Instagram this week, but the absolutely bonkers thing is that she converted the traffic to her post into nearly 50,000 potential newly-registered voters. Kylie didn’t try to trick her followers, either; her caption on the post was strikingly straightforward: “but are you registered to vote? click the link in my bio.. let’s make a plan to vote together,” it read. And her stans listened. TMZ reported that Vote.org saw a massive 1500% boost in traffic via Instagram after Kylie’s thirst trap dropped. By contrast, the site got 2,900 hits driven from Instagram the day before.

It’d be impossible to list all the famous faces currently encouraging people to vote. Honestly, with the entertainment industry still mostly stalled by the pandemic, what other meaningful work could they be doing right now? Frank Ocean launched a campaign on his Blonded website this week pushing voter registration. Beyoncé said at the BET Awards, “We have to vote like our life depends on it, because it does.” Heck, Chris Evans maneuvered his accidental nudes into a pro-voting PSA. Even Dwayne “The Rock” Johnson dipped his biceps into politics last weekend by endorsing Joe Biden for president. "Now this is something that I've certainly not done in the past, so I'm gonna go big," the jacked star said of his decision to back the Democratic nom.

This sudden surge of political messaging from celebrities is a sign of our times — more specifically, it’s a signifier of how somber things have gotten in America. At this point, barely a month away from the big 2020 election, it feels irresponsible to post something formerly innocuous, like a thirst trap, without appending a civic call-to-action to capitalize on whatever clout you can muster. Kylie gets it. The other celebs are following suit. What this means in practice, however, is there’s literally no escape from politics for the next 34 days, which actually kind of stinks.