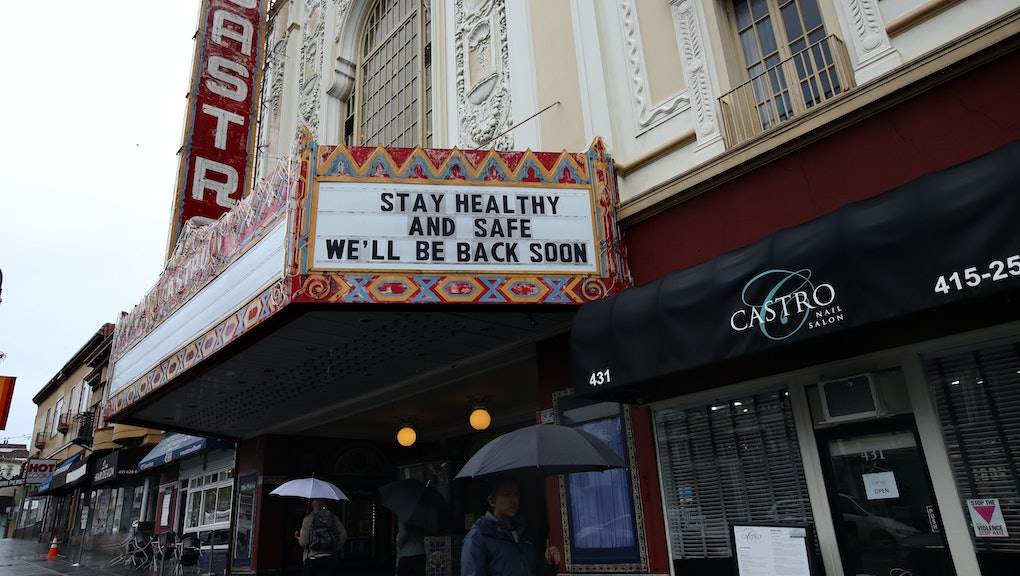 The coronavirus pandemic is wreaking havoc on life-as-usual, and nobody is sure if or when things will get back to normal. Tom Hanks and Idris Elba both have the virus now, for goodness sake. Will bars and restaurants and nightclubs and shops be closed for weeks? Months? When will anyone go see a play or movie in a theater again?

Most cinemas are shutting down this week, as people hunker down for an extended period of social distancing in an effort to “flatten the curve” and save as many lives as possible. Even before major cities began closing the places people congregate, Hollywood signalled we could be waiting out the virus far longer than feared. The 25th James Bond film, No Time To Die, got pushed back six months, from early April to late November. Disney’s live action Mulan was slated for release on March 27, but last Thursday, Disney told Deadline it wasn’t sure when the movie would open. Among the other films that’ve been postponed: Fast and Furious F9 and A Quiet Place Part II.

With millions of Americans sequestered at home right now, people are naturally looking for things to watch. And Disney is no dummy: late on Friday, March 13, the Mouse made Star Wars: The Rise of Skywalker available for purchase a few days ahead of its planned March 17 drop. It’s listed on most digital platforms — iTunes, Google Play, Amazon, Vudu, et al — for $20 a pop in SD and HD or $25 if you need that 4K Ultra HD experience. Alexa, play the Scrooge McDuck money swim video on YouTube, please.

Disney applied the same rationale to its release of Frozen 2. With schools closing nationwide and kids confined at home for the foreseeable future, the studio dropped the film three months early on its Disney+ subscription streaming platform on Friday. Newly-instated Disney CEO Bob Chapek noted, “the themes of perseverance and the importance of family are messages that are incredibly relevant during this time and we are pleased to be able to share this heartwarming story early with our Disney+ subscribers to enjoy at home on any device.”

Universal Pictures followed suit early this week, announcing it’d make some of its current releases (that’d otherwise currently be in theaters) available on demand. Titles like The Invisible Man and Emma will be rentable for $20 starting this Friday. Universal said in a statement the decision was prompted by the “rapidly evolving and unprecedented changes to consumers' daily lives during this difficult time,” and added, "NBCUniversal will continue to evaluate the environment as conditions evolve and will determine the best distribution strategy in each market when the current unique situation changes."

Digital entertainment was already starting to upend the movie distribution business. When streamers like Netflix and Amazon started producing their own big-budget films, it hardly made sense to give cinemas a window of exclusivity (and a cut of profits) before making content available to their subscribers. Of course, this rubbed cinephiles and some in the Hollywood establishment the wrong way. Netflix, for one, countered by renting a Broadway theater in which to screen The Irishman (in order to qualify for awards). The company also signed a long-term lease on New York City’s Paris Theater, a historic single-screen cinema, in the fall.

The coronavirus pandemic is forcing unprecedented disruption in the entertainment industry. With everything grinding to a halt — slated releases canceled, movie sets shut down, theaters empty across the globe — it’s hard to imagine anyone but the corporate behemoths coming out of this emergency on top. Disney has the resources to pivot quickly: they shut down their parks and funnelled energy towards streaming at the drop of a Mouseketeer hat. AMC, Regal and the like will probably pull through the crisis, too.

It’s the little guys I’m worried about. The local venues and indie cinemas that make it so pleasurable to spend a night out at the movies. And the emerging filmmakers and scrappy studios who rely on festivals and the aforementioned indie movie houses to get noticed. If coronavirus hastens the corporate takeover and puts mom-and-pop movie theaters out of business, that’d suck in myriad ways.