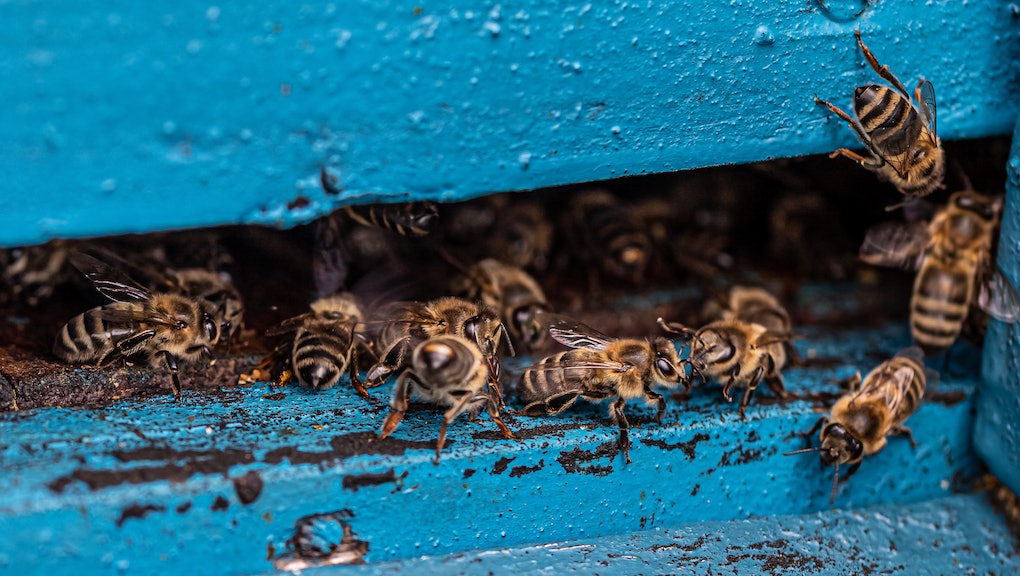 Murder hornets, formally known as Asian giant hornets, are bloodthirsty insects best known for their "slaughter phase," a period when they infiltrate honeybee hives, decapitate the bees, and take the larvae for food. They can wipe out entire nests this way, disrupting the already struggling honeybee populations.

And while Washington State officials last month found and destroyed the first murder hornet nest in the U.S. (which was filled with over 200 queens!) state entomologists still believe there are more out there, and are currently looking for signs of another nest.

In the meantime, a team of scientists observing hives in Vietnam have discovered a weird way bees in that country protect themselves from murder hornets: by throwing animal poop all over the hive. The team's findings were published Wednesday in the journal PLOS One.

It's gross, but for these bees it's a choice between living in a poop-covered hive or death by mandible.

To figure out how the bees were using the waste, the scientists placed herbivore dung from various animals around multiple hives. Then, they sprayed pheromones on the colonies that replicated the same pheromones giant hornets use to mark the hives they're planning to attack.

The bees responded by sticking more feces all over the hive like horrible Christmas lights. The colonies that didn't get sprayed didn't decorate with dung as much, leading the scientists to believe the honeybees were specifically reacting to the threat of their predators.

"The dung spotting around the entrances greatly reduces the time that the hornet spends landed at the entrance and really reduces the amount of time that they're chewing on those entrances," study lead author Heather Mattila explained to Wired. "They can still be outside, hunting individual bees and carrying them away, but they're not able to execute that next step, which is the really lethal step of getting into the colony."

Murder hornets apparently hate the poop-covered hives so much that their invasion becomes totally disrupted. According to the study, the manure forced them to spend 77-81 percent less time at the entrance of a targeted hive. The time they spent chewing at the entrance (to get into the hive) was also reduced by a whole 94 percent. Heavily or moderately covered hives repelled more hornets, too. The lightly covered hives were more likely to experience attacks from multiple hornets.

After their experiments, the researchers hypothesized why the hornets hate poop so much. There's a possibility that the herbivore dung contains compounds that naturally repels them. Honeybees in Japan, the authors noted, covered their hives in chewed up plant material instead of poop, so it could be related to whatever's in digested plants.

Another possibility is that the feces covered up the pheromones in some way, essentially disguising the fact that the hornets already targeted the hive for destruction.

Lastly, the hornets might just think the poop is gross. "It could be that the poop itself is repellent," Mattila suggested to Wired. "And certainly a lot of animals use feces as a way of kind of grossing out predators and keeping them away."

Poop-smearing appears to be a learned behavior that stems from predation, so honeybees in the States won't know how to use the same defense techniques yet. That's why finding out the exact reason why manure is repellant is important. If it turns out that it has something to do with the compounds in dung, then beekeepers could protect their bees by spraying the same compounds on their hives.

As officials continue their search for murder hornet nests, a spray like this could give beekeepers some much appreciated peace of mind.

This article was originally published on Dec. 10, 2020

More like this
"Brood X," a plague-level cicada infestation, is coming for us this spring
By Rafi Schwartz
The skyscrapers of the future will be made of wood
By Rima Sabina Aouf
What would a meat-free world look like?
By AJ Dellinger
Stay up to date