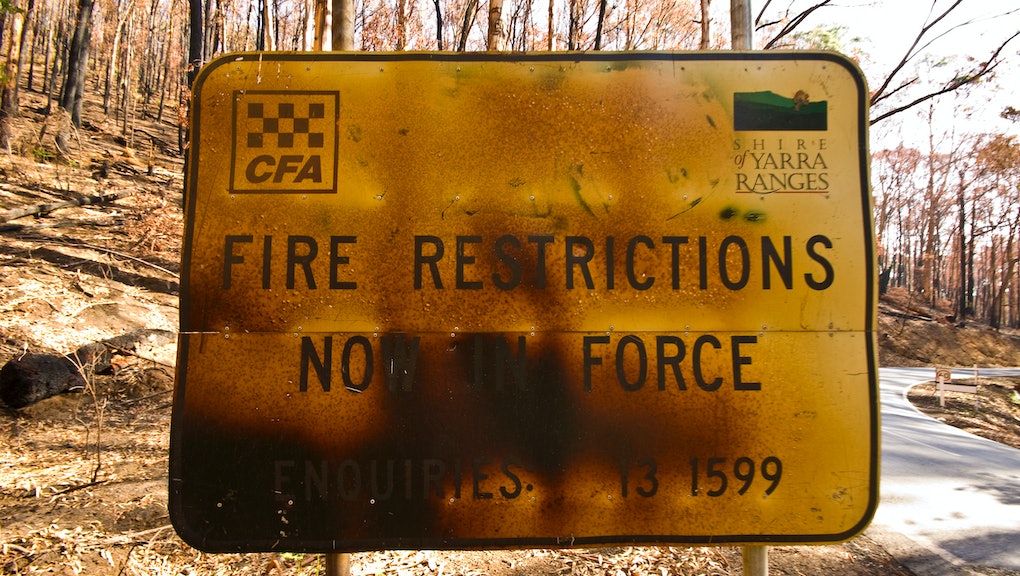 Australia’s bushfires made me go vegetarian

A charred joey carcass caught in a wire fence as it tried to flee the fires. The skeletal remains of Kangaroo Island, which hosted one of the most diverse ecosystems in the world, including the only population of chlamydia-free koalas in the world. Native birds washing up on the beach. These are just some of the shocking images forever burned into the memories of people living through the Australian Bushfire Crisis, which began in September 2019 and will continue well into 2020, with hundreds of active fires burning as I write this.

I spent the first weekend of this year having a mild panic attack about the climate apocalypse as the smoke rolled in.

My city, Melbourne, was blanketed in smoke, which had finally arrived in mainland Australia’s southern state capital city after weeks of tormenting Sydney and Canberra. A friend went to three different hardware stores on my behalf in search of bushfire smoke-particle-filtering P2 masks that are now sold out across much of the country.

Instead of wallowing in impotence I decided to take actionable steps to make sense of this scary new world.

I researched charities I could donate to and which ones needed the most assistance. I cobbled together some offerings for #AuthorsForFireys and #AuthorsForWildlife, Twitter auctions that benefit hard-working volunteer firefighters and animal rescue workers. But with so many organizations beckoning for money, it can be confusing figuring out which causes need the most help and which align with our values.

With limited options for how to feel like I was meaningfully making a difference, I decided to do something I had been putting off for years: I cut meat completely out of my diet and went vegetarian.

Until the embers have cooled and experts are able to access bushfire-affected areas, we’re unsure of how accurate the estimated number of one billion animals killed actually is.

“Over a billion would be a very conservative figure,” University of Sydney ecologist Chris Dickman told The Huffington Post.

What’s even more distressing is that this number only includes most mammals, birds, and reptiles: it does not take into account bats, frogs, and invertebrates, which could tip the scales even further, and have long-lasting effects on Australia’s ecosystem for generations.

A joint study from Mississippi State University and the University of Florida about mass mortality events indicates that Australia could see more animal carcasses than scavengers such as dingoes, goannas (Australian monitor lizards), and eagles can keep up with, and their decomposition will poison the soil and increase bacteria and pathogens that may affect people, the remaining wildlife, and livestock.

The billion figure also doesn’t include the 8.6 million sheep and 2.3 million cattle at risk in fire-affected areas which will devastate already-struggling Aussie farmers. In addition to the aforementioned heartrending photographs of Australian wildlife, footage from burnt farmlands and dead livestock was particularly brutal.

Consumers are likely to be hit hard, as well, with meat and dairy along with fresh produce and fish prices expected to soar.

And as Australia is the largest live animal exporter in the world (which is not without its own controversies), food shortages stemming from this will reverberate throughout the world.

Observing the bushfires, I'd made several changes to my lifestyle to make it more sustainable already. A few months ago I made the decision to — like Jane Fonda — stop buying new clothes. Save for a bulk order of reusable, washable fabric P2 masks for my coworkers, I’m trying to cut down on the amount of online shopping I do overall. Deliveries, especially when shipped internationally to my island nation, has a massive carbon footprint. There goes my RealReal addiction.

And though I’m not directly in the path of any fires, I packed an evacuation bag full of bottled water and important documents in the event of an emergency, which seems increasingly likely as our government hesitates to take drastic action on climate change.

I used to hold the hypocritical viewpoint that my ethics have always been vegetarian — it’s just my taste buds that have been my undoing. I stopped buying products that have been tested on animals years ago, I’m a big proponent of #AdoptDontShop, and I try to buy meat and animal by-products from farms where the animals are free-range and killed humanely. But the shocking images and statistics coming out in the wake of these fires have made a carnivorous diet untenable and have propelled me into full-blown vegetarianism.

Animal rights activists have long espoused the environmental benefits of a vegetarian or vegan lifestyle. “A vegan diet is probably the single biggest way to reduce your impact on planet Earth, not just greenhouse gases, but global acidification, eutrophication, land use and water use,” Joseph Poore of the University of Oxford told The Guardian. For example, 2.2lbs of meat requires between 1,320 and 5,283 gallons of water to produce, while 3.5oz of beef results in 231lbs of greenhouse gases. Meat production uses up to 75% of global farmlands and is the leading cause of mass wildlife extinction.

Australia is experiencing a maelstrom of both of these factors; 14% of the 6.3 million hectares (and counting) burned is farmland, and we’ve already established the devastating wildlife losses, with many species feared extremely at risk or extinct.

Protecting these valuable resources is the job of government which, unfortunately, has fumbled the Australian Bushfire Disaster massively. Until we can trust them to put protections such as Indigenous cultural burning and reducing our carbon emissions in place, knowing the facts and troubleshooting ways I can be a more ethical and less consumptive human on this Earth are the only ways I know how to exist in this hellscape.

More like this
Amazon fired employees in retaliation for climate activism, the U.S. labor board says
By AJ Dellinger
Texas officials responded to the winter storm with propaganda they got from a pro-fossil fuel think tank
By AJ Dellinger
Biden's American Jobs Plan throws $2 trillion at America's crumbling infrastructure
By AJ Dellinger
Stay up to date