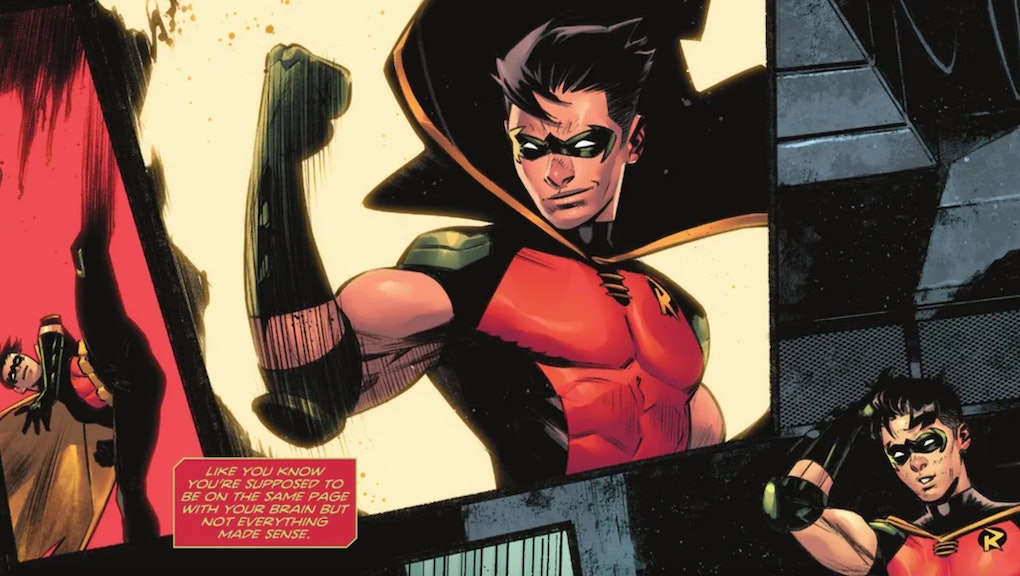 Batman's sidekick Robin dates dudes, and it's no big deal!

An exciting spoiler alert! In the final panel of the new issue of Batman: Urban Legends, Robin accepts a date with a dude. The best part is that it's no big deal.

Here's how the meet-cute goes down: Batman's sidekick saves his friend Bernard from a mysterious villain and the two share an unexpected moment of connection. Later, out of costume as Tim Drake, he gets asked out to dinner by the same guy (who doesn't know his friend and Robin are one-and-the-same). Tim happily accepts: "Yeah ... yeah, I think I want that," he tells Bernard, beaming.

It makes Robin the first new LGBTQ+ member of the Bat-family in 15 years, since the introduction of Kate Kane as Batwoman in 2006. As noted by Polygon, Gotham City has become a much queerer place since she arrived on the scene. Harley Quinn and Poison Ivy started hooking up. Catwoman had a girlfriend before she started dating Batman. Midnighter and his husband have an adopted daughter. Victoria October, a bioweapons expert and doctor who is transgender, became Batman's ally in 2017.

Writer Meghan Fitzmartin said that when she was asked for a storyline for Tim Drake about identity and discovery, she knew it had to be a coming-out story. She emailed her editor: "Look, I don’t know if this is something that can happen, but this is the story, because it’s the only story it can be." Happily, he went for the idea. "I fully sat on the floor of my apartment for a solid two minutes in happiness as it sunk in," she told Polygon. "I hope it is as meaningful for others as it has been for me."

Folks have long speculated that Batman's loyal sidekick is queer, since the first Robin, Dick Grayson, was introduced in the 1940s. Glen Weldon documented the history of gay subtext between Batman and Robin in a 2016 article for Slate, noting depictions of the crime-fighters waking up in the same bed and Robin throwing jealous fits when Batman dated women. A former Batman writer even told Playboy that "gayness is built into Batman."

For what it's worth, Tim isn't labeling himself yet. "I wanted to pay tribute to the fact that sexuality is a journey," Fitzmartin told Polygon. Robins past and present have dated women, including Tim, who's on-again-off-again with fellow teen superhero Stephanie Brown, a.k.a. Spoiler. "To be clear, his feelings for Stephanie have been/are 100% real, as are his feelings for Bernard," Fitzmartin said. "However, Tim is still figuring himself out. I don’t think he has the language for it all... yet."

Just like the casual mention of Loki's gender fluidity in the titular Disney+ series, the new Batman comic treats Robin's same-sex interest as no big deal and it's refreshing. Society tends to want to pick apart and label the identities of famous figures — both real and fictional. It's a nice reminder that people don't need to put themselves in boxes to explore who they are.

More like this
Colin Kaepernick's new Netflix documentary highlights the man behind the icon
By Keith Nelson Jr.
Amazon wants to legalize it
By Melissa Pandika
An anti-vaxxer decided to come to work in blackface, comparing her "plight" to that of Rosa Parks
By Melissa Pandika
Stay up to date