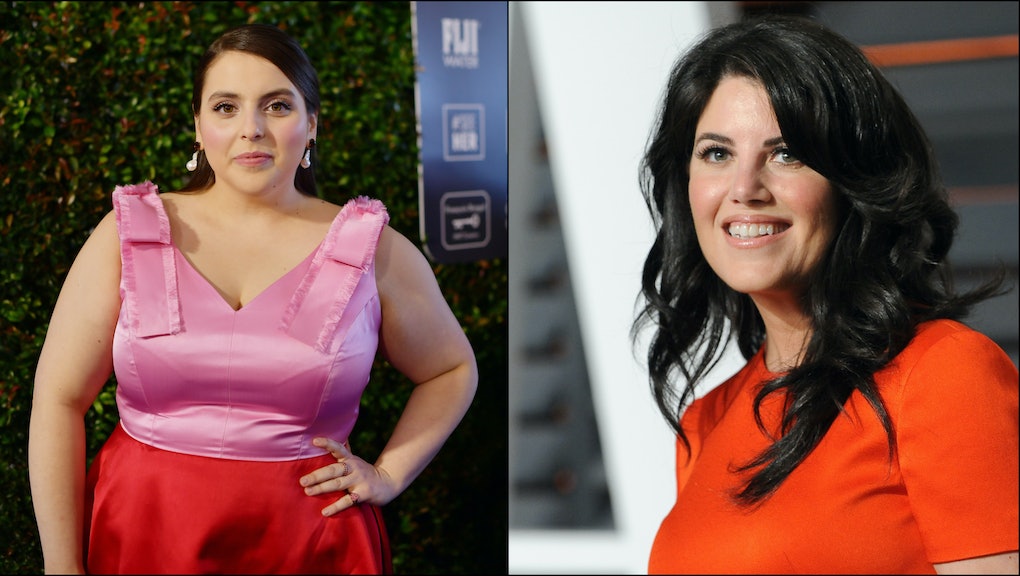 The Clinton-Lewinsky scandal captivated the nation in the late-90s, turning the then-president's pursuit of a sexual relationship with a 22-year-old White House intern into lurid tabloid fodder. More than two decades later, the saga is being trotted out to entertain people again, this time as a TV drama based on the real events. And unlike the first go-around, when the young woman at the center of the scandal was slut-shamed and vilified by the media, Monica Lewinsky is in control of her narrative.

Beanie Feldstein, who's starring in FX's American Crime Story: Impeachment, told the Television Critics Association that "every word" and "every script page" was reviewed by Lewinsky, who's also an executive producer on the series. "When I received the scripts, I knew that every word that I was saying was approved and had been to Monica first," she said. "By the time it got to me, I was sure that everything in there was something that she felt comfortable with, she felt was real to her life and represented her."

The tide of public opinion has mostly shifted in Lewinsky's favor in recent years, largely spurred by the #MeToo movement and changes to how society treats women subjected to sexual harassment. In a new cover story for W magazine, Feldstein said she'd probably make the same choices as Lewinsky if she were in the same position.

"I'm queer, so I don't know if I'd flirt with the president, but who knows? When Clinton shined his light on you, there was no better feeling in the world," she explained. "It wouldn't matter if you were male, female, nonbinary, queer, when that man put his spotlight on you, the world fell away. And if I was 22 and the most powerful person in the world focused his high beams on me, I would probably do the exact same thing as Monica."

The actor also noted she feels a duty to protect Lewinsky. "I felt gutted by some of the things that Monica went through. My task is to be Monica's bodyguard — to put my body in front of hers," Feldstein said. "It's my job to portray her pain, because I feel so much for her."

The cast of American Crime Story: Impeachment is stacked with buzzy names and Ryan Murphy regulars, including Clive Owen as Bill Clinton, Sarah Paulson as Lewinsky's confidante Linda Tripp, Edie Falco as Hillary Clinton, Billy Eichner as journalist Matt Drudge and Cobie Smulders as conservative talking head Ann Coulter. It premieres on September 7. Ironically, the series is based on the book A Vast Conspiracy: The Real Story of the Sex Scandal That Nearly Brought Down a President by Jeffrey Toobin, the journalist who was exposed for exposing himself on a Zoom call with colleagues last year.