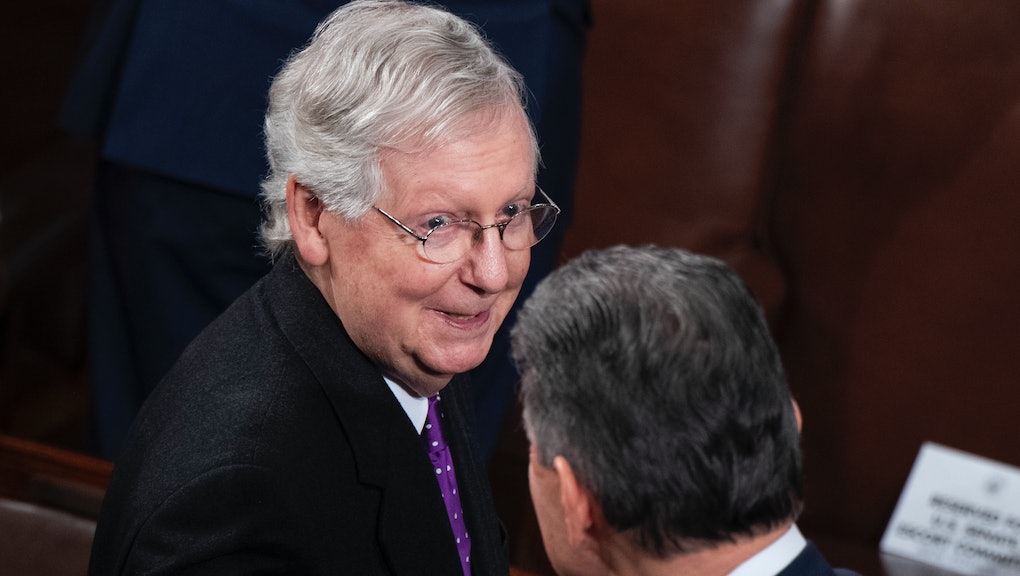 Behold, the McConnell-Manchin bromance that truly no one needed

At this point, West Virginia Democratic Sen. Joe Manchin's unrepentant refusal to recognize — or at least acknowledge — his role in tanking his own party's legislative agenda is a fairly established fact. Manchin has displayed no interest in working to reform the obviously broken Senate mechanisms by which Republicans (and to an almost comedically lesser degree, Democrats) have prevented anything resembling effective governance to proceed. Couching his stance in the lukewarm language of bipartisanship and senatorial exceptionalism, Manchin is either perfectly content to allow Republicans to continue dismantling the Democratic process in their permanent favor, or is simply too naive to see it happening before his very eyes.

Regardless of whether his faith in the vaunted institution that is the United States Senate is genuine naivete, or a craven insight into some fundamental conservatism, Manchin's stance has hardly endeared him to members of his own party. It has, however, earned him the accolades of Senate Minority Leader Mitch McConnell — who, as it happens, is probably the biggest beneficiary of Manchin's obstinance.

In an interview with Fox News on Thursday, McConnell lauded Manchin's refusal to do away with the filibuster — the parliamentary tool through which McConnell has been able to effectively keep the Senate at a standstill for all major pieces of legislation he doesn't like. McConnell said: "I admire the Democratic senators who believe the institution of the Senate is important, and they're willing to protect it."

Well golly, isn't that nice coming from someone who only seems to care about the "institution of the Senate" when it's in his best interest? Surely McConnell is operating in the very best of faith, isn't he? It's not like he would gleefully manipulate the seemingly immutable rules to ensure maximum Republican control, right?

Of course, truly maximum Republican control would be if Manchin simply embraced his apparent eagerness to screw over Democrats and switched parties completely, thereby putting McConnell back in the leader's seat. But McConnell is a realist, or at least, is very good at saying exactly the sort of thing that would sound extremely appealing to Manchin, without risking the sort of scattershot chaos that comes with a party switch.

"Sen. Manchin has pointed out over and over again: He's been a Democrat all of his life. I am certainly not anticipating that he's going to cross the aisle," McConnell noted, when pressed about whether a switch is possible.

"But," he reiterated, "I do admire his willingness to protect the Senate as an institution."

Again, that same institution — the one in which McConnell has been perhaps the single most effective member since Lyndon Johnson — hardly seems worth protecting, or at least shielding from criticism, when one political party has stated outright that they refuse to play by the rules.

But so long as McConnell keeps paying lip service to the romantic idea of the Senate as a place where scholar-statesmen come together to do what is in the public's best interest, then Manchin has enough cover to continue rhapsodizing about his maybe-sincere-maybe-craven belief in bipartisanship. All the while nothing gets done, and no one's lives get better. Still, for Manchin, just hearing that someone — anyone — thinks he's a nice guy seems to be all he needs to keep it up.

More like this
Republicans are in an excellent position to weasel their way back to House control
By AJ Dellinger
More than 200 GOP lawmakers asked the Supreme Court to overturn Roe v. Wade
By Rafi Schwartz
Nancy Pelosi took a stand on the Jan. 6 committee, and it left Republicans whiny as hell
By Rafi Schwartz
Stay up to date