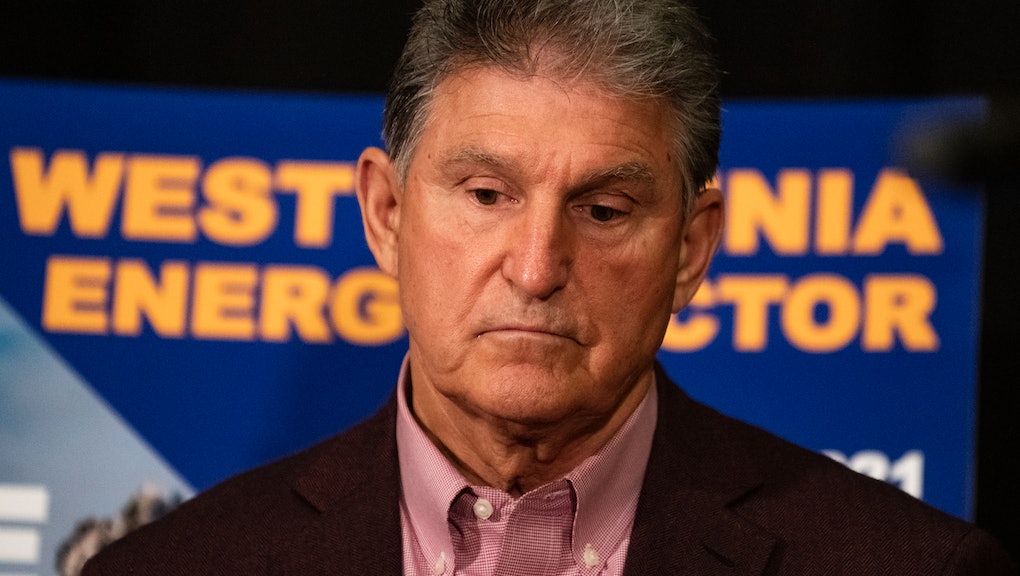 Joe Manchin is tanking the Democratic agenda from the inside

The conventional (which is to say, unexamined and deeply uninspiring) wisdom is largely as follows: Sen. Joe Manchin may be among the more conservative voices in the Senate, and easily the most conservative among the Democrats, but that's just the price to pay for electing a Democrat in West Virginia. If he weren't as conservative as he is, he wouldn't be elected in the first place.

That may be the case — certainly it makes sense for a predominantly red state like West Virginia to lean heavily rightward, even when they're voting blue. But at a certain point, you have to wonder whether Manchin being a Democrat really matters, especially when he obstinately refuses to do the one thing that would actually enable his party to govern in the face of grotesque obstruction from the actual Republicans with whom he so often finds himself aligned.

Instead, as Manchin made abundantly clear in an op-ed in the Charleston Gazette-Mail this weekend, he has absolutely no intention of aiding his fellow Democrats in eliminating the filibuster, or supporting the For the People Act, a sweeping voting reform measure that seeks to counteract the full-court press of GOP suppression tactics that have only gathered steam since the 2020 election.

He writes (emphasis mine):

Unfortunately, we now are witnessing that the fundamental right to vote has itself become overtly politicized. Today’s debate about how to best protect our right to vote and to hold elections, however, is not about finding common ground, but seeking partisan advantage. Whether it is state laws that seek to needlessly restrict voting or politicians who ignore the need to secure our elections, partisan policymaking won’t instill confidence in our democracy — it will destroy it.

As such, congressional action on federal voting rights legislation must be the result of both Democrats and Republicans coming together to find a pathway forward or we risk further dividing and destroying the republic we swore to protect and defend as elected officials.

Doesn't that sound nice? Let's all get together, hold hands, sing "kumbaya," and just ... make everything better. Piece of cake!

Unfortunately, Manchin's Pollyanna-esque assessment of the current state of partisan politics is either ignorant, or a blatant lie. There is one party interested — like Charlie Brown and the football — in pursuing a bipartisan "pathway forward." The other party is overtly committed to subverting the electoral process wholesale in order to cement a regime of minority rule. Put in another, very simple way: Democrats are trying to win a game that Republicans have already vowed to cheat at.

Does Manchin actually believe there are Republicans willing to ignore partisanship and work together on some shared sense of purpose? At this point, it's hard to imagine he does. Just a week before his op-ed piece, Manchin predicted Democrats could find "10 good people" among the Republican senators who would support a congressional commission to investigate the January insurrection. He got six — four below the 60-vote filibuster threshold Republicans have used to block Democratic priorities for years.

If he couldn't find enough Republicans to agree there should be an investigation into an attempted violent coup, what on Earth does Manchin expect will happen when Democrats push back against the slate of conservative-led efforts to suppress the votes of those who would likely vote against the GOP? Is he incredibly naive, lying to himself, or lying to the rest of us?

Of course, the 60-vote filibuster threshold has been used by both Democrats and Republicans to block the opposition party's legislative priorities. But under now-Minority Leader Mitch McConnell, Republicans wielded the filibuster with surgical precision, and without restraint to block legislation — even hugely popular bills — originating from across the aisle.

With that in mind, the growing effort to eliminate the filibuster altogether has picked up steam in recent months, as more and more Democrats have come around to the realization that Republicans simply are not interested in sharing power. And yet despite the fact that the filibuster means that bills which enjoy a clear majority in the Senate are still subject to partisan assassination — particularly from Republicans who look at at 56/100 vote in the Democrats' favor, and still can call it a "win" for the GOP — Manchin has been steadfast in his refusal to actually create the space for real legislative progress.

He writes in his op-ed (again, emphasis mine):

It has been said by much wiser people than me that absolute power corrupts absolutely. Well, what I’ve seen during my time in Washington is that every party in power will always want to exercise absolute power, absolutely. Our founders were wise to see the temptation of absolute power and built in specific checks and balances to force compromise that serves to preserve our fragile democracy. The Senate, its processes and rules, have evolved over time to make absolute power difficult while still delivering solutions to the issues facing our country and I believe that’s the Senate’s best quality.

I believe that partisan voting legislation will destroy the already weakening binds of our democracy, and for that reason, I will vote against the For the People Act. Furthermore, I will not vote to weaken or eliminate the filibuster. For as long as I have the privilege of being your U.S. senator.

Again, this sounds lovely — dedicated public servants grinding out the hard work of compromise to come to an equitable solution that is in everyone's best interest. What's not to love? But it is in no way reflective of reality. If there was a legitimate track record of bipartisan compromise and effective progress in the Senate, Manchin's obstinance would be a frustrating but resonant criticism. Without that record, however, he comes across as either out of touch, or willing to take the heat from his own party, in the service of the other one.

Joe Manchin might be the only sort of Democrat West Virginia will elect. It's entirely likely that once he's out of office, West Virginia won't elect a Democrat for years to come, if ever again. But given his current stance in Congress, it's not like he's doing much good for Democrats to begin with.