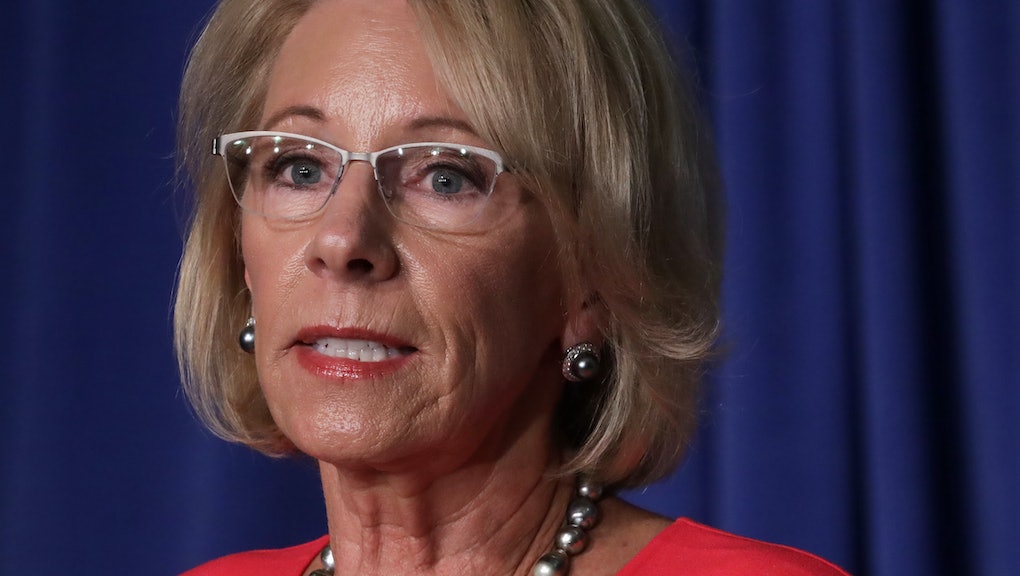 The election of Joe Biden means not only will the United States have a new president, but there will also be an overall administrative shift. With most of President Trump's appointees on their way out, some are rushing to leave colleagues with final pieces of advice. That includes outgoing Education Secretary Betsy DeVos, who urged Congress to "reject" student loan forgiveness in what appears to be a goodbye letter.

Obtained by Politico and CBS News, the five-page letter where DeVos shares "closing thoughts" on her time as education secretary was addressed to Senate Majority Leader Mitch McConnell (R-Ky.) this week. In addition to McConnell, the letter was also shared with congressional leadership and the House and Senate Education Committee members, along with the members of the appropriations subcommittees.

DeVos began her missive with musings about how the pandemic "has revealed much about education in America. Sadly, too much of it is not encouraging." She goes on to criticize what she sees as Congress focusing more on what schools need, by funding buildings, programs, and school-related activities, versus putting students first.

Really, though, the focus of DeVos's letter is to rail against student loan forgiveness. In the U.S., student loan debt hit an all-time high of $1.6 trillion at the end of 2019, according to the Federal Reserve; student debt is the largest form of debt in the U.S. behind only mortgage debt. In the middle of a financially devastating pandemic, many Americans are once again arguing for the necessity of student loan forgiveness.

But since her appointment in 2017, DeVos has largely made life more difficult for borrowers. One of her first major moves included ditching an Obama-era incentive to give federal student debt contracts to debt collection companies with the strongest record of helping borrowers and the lowest rates of loan defaults. She previously criticized student loan forgiveness as unfair to "taxpayers" as well as "to those who have paid or are paying their loans."

DeVos made the same argument in her letter, writing, "I hope you also reject misguided calls to make college 'free' and require the two-thirds of Americans who didn't take on student debt or who responsibly paid off their student loans to pay for the loans of those who have not done the same."

"Across-the-board forgiveness of college debts is not only unfair to most Americans, it's also the most regressive of policy proposals — rewarding the wealthiest sector of our labor force at the expense of the poorest," she continued.

While DeVos neither acknowledged Trump's election loss nor referred to Biden by name, her dismissal of student loan forgiveness and making college "free" is in direct respond to the incoming administration. In October 2019, Business Insider reported that Biden proposed making undergraduate education free in some cases, though his plan was hardly the most progressive one put forth during the Democratic primary.

Overall, DeVos's letter is standard Republican fare: resisting aid to a group of people who could vastly benefit from it, on the argument that it might help less desperate people too. But the incoming Biden administration won't necessarily mean that everyone will get to breathe a sigh of relief, as Biden isn't actually on the path to cancel all debt. Last month, Biden proposed only $10,000 in student loan forgiveness, and in response to those requesting he do more, he told The Washington Post, “I’m going to get in trouble for saying this. ... It's arguable that the president may have the executive power to forgive up to $50,000 in student debt. ... Well, I think that’s pretty questionable. I’m unsure of that. I’d be unlikely to do that."

More like this
New York has set aside a massive, first-of-its-kind fund for undocumented workers
By Rafi Schwartz
March Madness might be over, but the fight for gender justice continues
By Lindsey Darvin, Anita M. Moorman and Ann Pegoraro
Daunte Wright would be alive "if he would've just complied," Minnesota police bigwig says
By Rafi Schwartz
Stay up to date