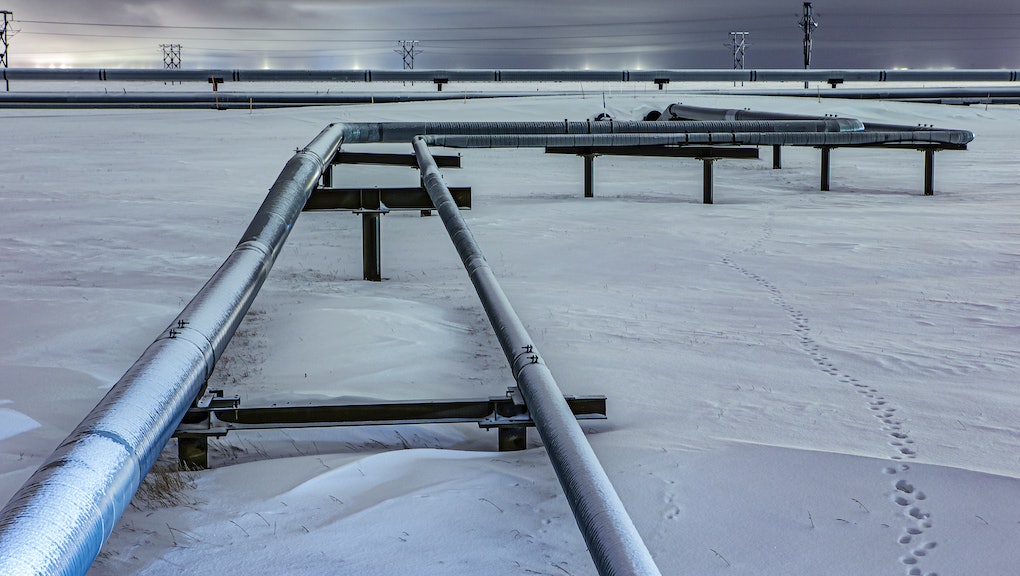 In the last half-decade, Alaska has warmed faster than any other state in the country. That spells trouble for a lot of people, including those who are largely responsible for that uptick in temperature. Energy companies trying to extract hundreds of thousands of barrels of oil from the region have run into challenges, as their drilling equipment is at risk on increasingly unstable land.

But have no fear, these companies have a solution for their own problem. According to an environmental review published by the Department of the Interior's Bureau of Land Management (BLM), Big Oil firms have used cooling devices to freeze the ground underneath their rigs and pipelines, providing additional stabilization that allows the extraction process to continue. The technological tools, which have been in use for several years now, range from equipment that can determine when the ground is solid enough to support oil infrastructure to thermosiphons that suck heat out of the ground to prevent permafrost from thawing out from underneath oil lines.

This technology will play a significant role in Big Oil's expansion into parts of Alaska previously unmolested by the industry. Earlier this year, the Trump administration announced that it was opening up more than 1.5 million acres of the Arctic National Wildlife Refuge (ANWR), the largest national wildlife refuge in the country and biggest plot of untouched wilderness in America, for drilling. It has also given the green light to allow companies to expand drilling in the National Petroleum Reserve, also located in Alaska.

These areas, like all of Alaska, have been adversely affected by climate change. According to a study published last year by the Alaska Center for Climate Assessment and Policy and the International Arctic Research Center, the state is warming at an unprecedented rate, and it's producing all sorts of new challenges for its residents. The persistently hotter than usual temperatures, including new record highs during the summer months, have resulted in a shrinking snow season across the state. The steady warm weather has also led to sea ice retreating across the state's coast, cutting into an essential habitat for wildlife like polar bears and increasing the risk of extreme weather events like glacial flooding.

Drilling for oil in the region only exacerbates these problems, and the Trump administration has basically told energy firms to treat the region as an oil buffet. That includes pushing the boundaries of where drilling can happen well into the land that is already occupied, particularly by indigenous people, according to The Guardian. In the case of the National Petroleum Reserve, Trump and his cohorts have significantly expanded the areas open to drilling, pushing into areas that were once considered entirely off limits. That includes Teshekpuk Lake and surrounding wetlands, which is considered to be one of the most important animal habitats in the arctic, providing biodiversity that allows wildlife to thrive. That land has also been essential to the survival of the region's indigenous population, who hunt and fish in the area.

While oil companies tap new technology to continue drilling across the Arctic, the people who call these lands their home get no such benefit. There is no effort to save or preserve the ecosystems they rely upon to survive, and no freezing the effects of climate change as they continue barreling forward, forever changing the climate across the Arctic. It just goes to show that Big Oil is only interested in preserving land for long enough to exploit it.