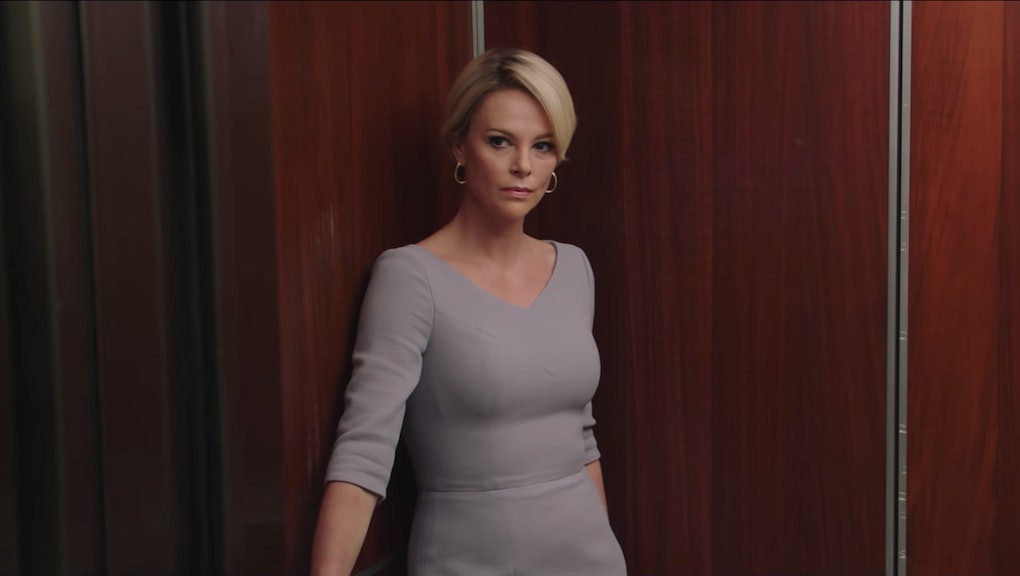 'Bombshell' is an oversanitized mess — and a missed opportunity

On July 6, 2016, Gretchen Carlson, erstwhile Fox & Friends co-commentator and host of her own Fox News show, filed a sexual harassment lawsuit against her boss Roger Ailes. Two weeks later, Megyn Kelly, one of the network’s brightest stars, followed Carlson’s example by confirming to investigators hired by Fox News’s parent company that she, too, had been harassed by Ailes. Two days after that, Ailes resigned, even as he denied the charges while his lawyer tried her damndest to discredit them publicly. The rest is recent history.

On Dec. 13, this saga will be relitigated on the big screen (yes, already), with wide release coming Dec. 20. Bombshell, from director Jay Roach — fondly remembered as the director of the Austin Powers movies — retells the Ailes story in one of awards season’s most appallingly misguided slabs of prestige bait. A self-satisfied mess, Bombshell mistakes shameless mimicry of the story’s real-life protagonists for acting and suffers from a puffed-up and frankly delusional approach to its very complicated material.

Rather than accept and depict Carlson and Kelly as who they are, Bombshell chooses to sanitize them so thoroughly that only noble heroines remain. The impulse is understandable — victims are to be believed and sympathized with. What happened to Carlson and Kelly, and to the many women who have neither their names nor their industry clout, should not happen to anyone. Period. That’s not the problem.

No, the problem is that Kelly famously had beef with black Santa, and that Carlson blew quite a few dog whistles during the Obama presidency. Again, that doesn’t at all mean they deserved what Ailes (played by John Lithgow in corpulent makeup) did to them. Making Bombshell means reserving empathy for the abuses they endured at his hands, because empathy is required for anyone subjected to sexual assault. But both Roach and screenwriter Charles Randolph fail to do what culture at large had to do in 2016 when Ailes was brought down in part thanks to Carlson and Kelly’s influence: reckon with what it means when people like them do the right thing.

Bombshell fails to meaningfully acknowledge that Carlson and Kelly are essentially war profiteers, people who filled their coffers selling slander, racism, misogyny, transphobia, homophobia, Islamophobia, and other fast foods. It does not allow either of them to be flawed. A clip of Kelly’s infamous haughty snort about Jesus and Santa both being white gets background play here, while Carlson has a brief, hilariously slack encounter with a left-leaning woman who shames the TV host in a grocery store while she sorts through honeycrisp apples. “How you treat people you disagree with says everything about you,” Carlson retorts, satisfied at her sharp wit, but the stranger merely smiles in response. “Bless your heart,” her glance says. Carlson gets it, but she doesn’t really care. She wins her righteous victory. She bags her apples.

Likewise, the movie doesn’t really care that Carlson was, at this point in its timeline, a functional part of the same system she turned around and sued the moment it victimized her. Nor does Bombshell mention any of her on-air bigotry or conspiracy theories. (Remember the time Carlson threaded the needle on a truly loopy cross stitch to accuse the Obama administration of lying to the public about the imminent danger of the Ebola virus?) In fact, Roach and Randolph erect in the film a shield of anti-accountability around both Kelly and Carlson, chiefly via oft-repeated remarks that both women made good TV, and that’s why they deserved success.

But the more Bombshell emphasizes this notion that confrontation and controversy add up to spicy entertainment, the more the movie elides how much damage the Kellys and Carlsons of the world inflicted on others who did not share their network news clout. The film makes no effort to reckon with Kelly’s Santa Claus snafu; there is no justifying of Carlson’s confrontation in the produce aisle. Bombshell’s best attempt is when it uses fictional composite character Kayla Pospisil (Margot Robbie), an aspiring Fox News host, to call out Kelly for not wielding her name and reputation sooner to spare other women her fate. Pospisil passes Ailes’s loyalty test in the movie’s harshest scene, a cringer where the young journalist rolls her skirt higher and higher at Ailes’s panting, flop-sweating behest, her smile fixed but quivering.

Roach’s commodification of this horror show is in the worst taste.

Pospisil’s determination to appease the boss to further her career carries her through the ordeal, but can’t relieve her of the trauma. Kelly can’t, either — but she could’ve prevented it. This is a key moment in Bombshell’s accounting, and yet it’s fleeting. The film moves on almost immediately. This isn’t what Bombshell is about, after all. Instead, the film takes the absolute narrowest view of Ailes’ downfall to make the story easily digestible for as broad an audience as possible. Roach’s commodification of this horror show is in the worst taste.

Rigorous litigation of how Kelly and Carlson fit into the story of taking down a predator feels necessary, especially after the #MeToo movement redefined culture. It is, after all, a matter of public record that Carlson and Kelly helped topple one of the most powerful and amoral men in media. It’s also a matter of public record that they achieved this feat by weaponizing their value to the network, value they built by perpetuating the same top-level misogyny that eventually stole their own dignity. Their on-air comments about birtherism and the New Black Panther Party and the racism of Ferguson police are a matter of public record too. A simple Google search tells all.

Bombshell could have been convoluted and messy. It could have demanded legwork from its audience. Americans have already done that work. They can do it again.

Instead, Roach and Randolph take the simpler route of reframing Fox News as a soul-sucking vortex that poisons the otherwise well-intended people who set foot inside: Kelly, Carlson, Pospisil, and even Jess Carr (Kate McKinnon), a producer at the network and closeted lesbian and Hillary Clinton supporter who romances Pospisil in spite of the political divide between them. Carr can’t get work elsewhere — association with Fox News is toxic enough that potential employers won’t contact her, much less interview her, much less hire her. (Carr and Pospisil do eventually get together about a half-hour into the movie in what’s easily the best scene of its 108 minutes, a moment when solid filmmaking and easygoing acting combine in a rare, genuinely charming depiction of tender candor.)

“Watching these three join forces with other women at the network to engineer Ailes’ eventual firing brings a grim sense of satisfaction,” Dana Stevens wrote in her review for Slate, “but when you remember that Kelly herself was fired from NBC last year for defending blackface on air, it gets a bit harder to pump your fist in solidarity.”

Fox News represents power. Together, these women fight that power, never once taking ownership for the ways they’ve facilitated its success and given it life. They don’t have to; Bombshell lets them off the hook and stops just short of fully pardoning them.

It won’t be the last movie of its kind. It isn’t even the first piece of dramatized media about the accusations against Ailes; that would be Showtime’s The Loudest Voice, a miniseries similarly cobbled together from hammy impersonations and phony makeup (and which glosses over Kelly altogether). But Bombshell is the last — and possibly only — chance Hollywood had at untangling the threads of Ailes’ ouster, and the dual role Carlson and Kelly played in his ruin.

And when you consider it that way, it’s depressingly clear: Roach and Randolph have spectacularly failed what’s arguably the first #MeToo biopic.

More like this
In 'Roadrunner,' Anthony Bourdain shows us the beauty of the mundane
By John Saward
Disgraced congressional candidate Roy Moore tried to sue Sacha Baron Cohen. It didn't go well
By Kara Weisenstein
Ted Cruz and Matt Gaetz are the last people who should be talking about #FreeBritney
By Chloe Stillwell
Stay up to date